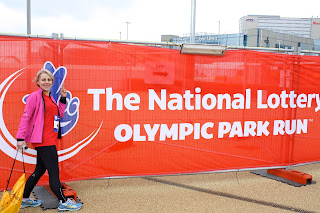 What a day!  Up early this morning to take Number One Son to the drop off point for his DofE practise expedition, and then back up the A3 to pick up a friend and catch the train to London.  I have to admit that I probably drank rather more than I should have done on Friday evening, a combination of extreme tiredness and euphoria at surviving another term lowered my resistance to temptation and, it being a wee while since I have had a drink I think I felt the effects a bit more than usual.  I was a little tired and emotional this morning, not actually hungover, but very tired!

A lovely late breakfast at Balans seemed to improve my mood, and we headed to the stadium.  The queue to get through security was very long, but moved quickly and we were soon in the Olympic Park with thousands of other runners and spectators.  I couldn't quite believe it. 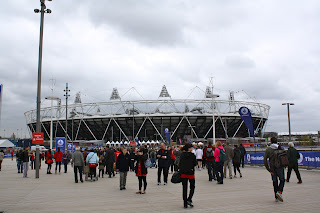 The Stadium itself was impressive, but not as pretty as the Beijing Olympic Stadium.  I think it suffers from the cloudy backdrop and would probably look better with a clear blue sky behind it!  And the Orbit Tower is very strange!  A sort of giant helter-skelter! 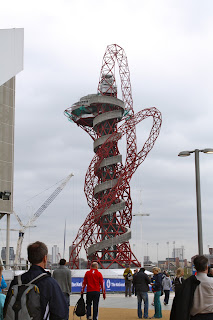 As we walked into the stadium I suddenly started to get really excited!  We found great seats for Husbando and my friend in a position where I could easily spot them as I ran through the stadium.  I couldn't believe I'd actually be running on that  track!  Then the nerves struck.  Regular readers will know that I haven't had the best couple of weeks with respect to running.  This is the first race I have ever started without being absolutely confident that I could actually run for the whole distance. 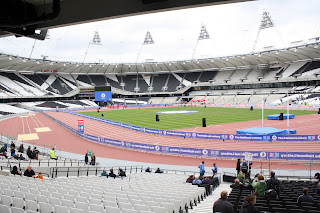 I sat and watched the entertainment for a while, trying to calm myself down, but eventually decided that I needed to get myself away and made my way to the start line.  Via the loos of course!  Whoever planned the Olympic Stadium definitely got the loos right, there are far more ladies' loos than men's loos.  There were no queues for the ladies' which was a refreshing change. 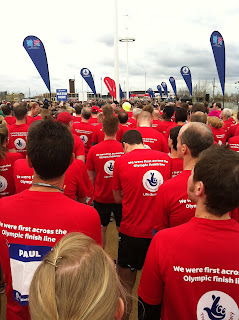 The start was a sea of red shirts, with virtually all runners wearing the race tshirts.  I was in the second starting wave, so had a long wait at the start.  The race was started at 2pm by Princess Beatrice, but our wave didn't go off until 12 minutes later.  Princess B sounded the starting horn for our wave then ran down from the podium to run the race.  The race was congested at the start and, to be honest, the field never really thinned out, it was so strange to be running with everyone else wearing the same thing - that hasn't happened since PE lessons at school!   It was very, very cool to run around the park.  And a great relief to be moving so that I could warm up a bit!

Some of the Park was still under construction, but we ran past all the various arenas, including running right around the mirrored outside of the Velodrome - possibly my favourite of all the buildings.  It was surprisingly hilly, with quite a few hairpin turns to negotiate.  I set off at what I thought was a gentle pace, taking it easy as I wasn't sure how my knee was going to cope.  It hurt, but adrenaline was keeping me going.  I didn't want to run the race without seeing the sights and enjoying the atmosphere.  Because all the spectators were being entertained in the stadium there was very little support on the course, a couple of African drum bands and bemused looking builders was about all!  I did wonder why they didn't think of positioning speakers around the route to relay the events inside the stadium.

The mile markers were way off!  I thought this might mean that the fifth 'mile' would be very short, but I suspect that this was quite a long five miles!  The strange positioning of the markers meant that as we approached the stadium I thought that I was almost there, but no!  If you look at the photo below you'll see that it appears that I ran directly across the stadium before running around the track.  In reality we ran through a tunnel underneath all the stands, then into the stadium as 'Chariots of Fire' was playing (I was tempted to run in slow motion!) 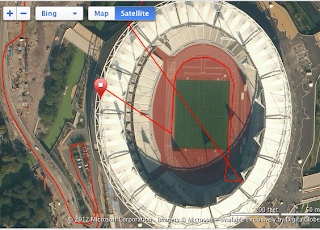 The crowds cheered enthusiastically and the track was beautiful to run on.  At 200m to go I looked up and saw Husbando and my friend waving and snapping away with cameras.  I waved!  Who wouldn't?  I realised that I really wasn't tired at all, I felt great, albeit great with very sore knees!  Crossing that finish line was amazing, my watch said I'd done it in 41min 32secs which was far better than I'd hoped for at the start of the day.  My Garmin took the distance to be 5.1 miles, and watches of those around me said anything between 5.1 and 5.3 miles (depending I suppose on how they accounted for the indoor time).  Those distances would give me a 5 mile time ranging between 39min 10secs and 40mins 40secs, which is where I shall be aiming for if I run this distance again! 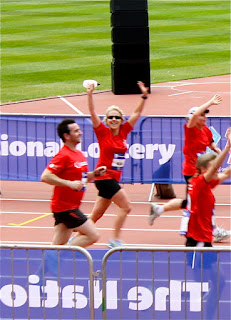 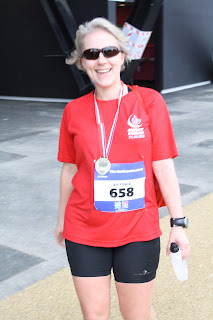 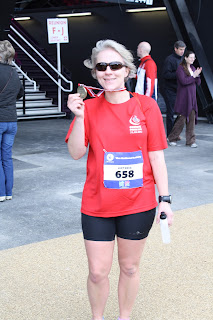 Medals and goody bags were handed out, timing chips were collected and runners were funnelled back to meet with their supporters.   The organisation of this event was fantastic!  Such a shame that this event is a one off as I'd sign up to run it again in a flash.

We made a hasty exit from the Olympic Park after I'd finished as West Ham were playing Reading at home, we didn't want to get caught up in the mass exodus and resultant Tube chaos, that would have taken the gilt of the gingerbread of what was a really brilliant day out!

I think 5 miles is a fantastic distance to race over.  Long enough to get into your stride, short enough (in future, when my knees are better) to really give it some welly.  It is the sort of distance that you can run hard without feeling totally wrecked for the next day!  I'll be looking for more 5 mile races in the future.

Posted by MrsBridgewater at 23:08 No comments:

I'm a bit ashamed of the gap between my last blog post and this one.  I quite often think about what I want to write while I am running, but on arrival home I am met with a barrage of small children with homework/laundry/food issues that need dealing with, and the ideas just slip away, until I am out again.  It is a vicious circle, and until I learn to blog on the run it is unlikely to be resolved!

I have been running. Quite a bit in fact.  Parkrun's have been completed, some interval training has been done at my new gym, and shorts and running singlets have made a welcome return to my running attire!  I still maintain that running is a great, effortless way to get a tan - no worrying about turning over, you just keep running and tan beautifully. 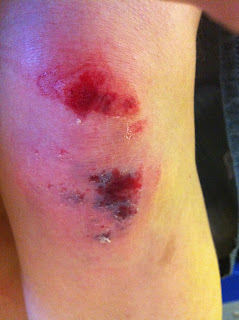 I had been gradually building up the distance of my Sunday run after having to cut back due to grotty colds, last Sunday should have seen me covering 10 miles, running from home to a neighbouring town to meet Husbando for breakfast.  I do love eggs benedict!  All was going really well.  It was beautifully sunny, and I was regretting the decision to wear capri length running tights rather than shorts.  There is a section of the route that is along the side of a fairly busy A road with no pavement.  I don't like this bit as the cars travel so fast and don't seem to be aware that they can actually cross the central line so that they miss runners by more than a nanometer.  I'd been running along the white line at the edge of the road, keeping my eyes on the traffic so that I could take evasive action if necessary.  What I didn't notice was that there were cats' eyes up ahead at the entry to a lay-by.  The toes of my left foot got caught under the lip of the cats' eye and I went flying.  Even before I hit the ground I was thinking about the races I had coming up and whether this would put an end to them!  Just as well I was thinking that then, because after I hit the road I was in too much pain to think!  It took me a while to work out how to stand up.  No one stopped.  I eventually stood up, retrieved my water bottle from about 10 metres further up the road and made a hysterical call to Husbando.  I then threw up!   Help arrived about 10 minutes later, but it was a long 10 minutes!  I still can't believe that no one thought that it might be nice to stop to help me!

I'm still a bit achey a week later, so have taken it easy.  I didn't miss parkrun though!  All things considered, I had a good run on Saturday, only 2 seconds slower than last week.  The weather was lovely, such a change from the constant drizzle that marked our 200th Basingstoke parkrun.

Today I went out for a longish run.  Only 6.3 miles, but plenty far enough considering all the aches and pains I am still suffering.  It was beautiful. Sunny and warm, but with a fresh breeze that made running a pure joy,  I took it very slowly.  I don't want to risk not being able to do the Olympic Run next Saturday!  I don't really care how slowly I do those 5 miles - it will be enough to have been part of it.

In other news, I have started contributing at the parkrunfan blog.  Only one blog entry by me there so far, but there'll be more soon.  I'm going to try hard  not to duplicate things too much - but a little repetition is inevitable I suppose.
Posted by MrsBridgewater at 20:13 No comments: