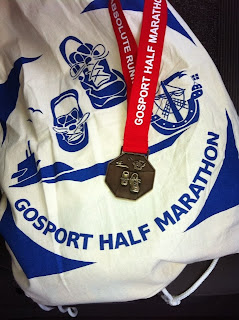 I had a lovely curry last night with some lovely friends.  We had been trying to get a date in the diary for months, so the fact that I was running the next day didn't really factor greatly when I booked the table.  I just decided that I wouldn't try anything new and I would not drink too much.  The food was great, the company was fun, I had a couple of beers and we got home fairly early so that I could get a good night's sleep.

I didn't sleep well.  I am normally very good at sleeping, so this was something of a surprise, but I didn't have to get up too early so it wasn't a big deal.  What was a bit more of a big deal was my rather uncomfortable stomach!

The journey down to Gosport was uneventful.  Parking was a bit more stressful as I searched the car for loose change to pay the hefty pay and display charge.  Soon I was making my way, via the toilets, to the race HQ.  I bumped into several friends along the way, sorted out timing chips, dropped off baggage and walked to the start.

I was still feeling a little bit delicate.  But, in for a penny (or about £14 in this case), in for a pound, and once lined up at the start line there is only really one way you can go.  I had no expectations of running a PB, I decided to enjoy my run and just see how it went.  The course isn't hugely interesting.  It is flat, that's true, but with a few exceptions it is a bit boring.  We had a couple of convoluted loops of the airfield which could have been mind numbing apart from the fact that the numerous switchbacks meant that we could see faster/slower runners coming past in the opposite direction.  I spent most of this time spotting friends and shouting encouragement when I saw them.

There were some lovely bits, running along the promenade with the beach to one side and jauntily coloured beach huts to one side was very memorable, and we were lucky to have a virtually wind free day.  I should imagine that it would have been a different story running into a headwind at 12 miles.  The marshals were unfailingly cheerful, and the on course support was good.  Overall it was a very well organised event with a pleasingly octagonal medal and a well filed, reusable goodie bag.

At around 8 miles I got chatting to a girl who was really struggling.  I ran with her briefly, encouraging her as best I could.  I decided that if I couldn't run a PB I would try to help other people make the most of their race.  There was another lad, who at about 13 miles was stumbling along saying 'I can't do this!'  I fell into step with him for a while, and bullied him into pulling his socks up!  I told him to concentrate on how far he had come, and how well he was doing.  He soon pulled ahead of me, and despite the fact that I had lost a few seconds by talking, talking, talking I was just so thrilled to see him cross the finish line with an exhausted smile on his face.  Both these runners sought me out afterwards to thank me for helping them finish their first half marathon.

I ran a good, evenly paced race.  In the final reckoning I finished in 1hr 53mins 05secs.  Less than a minute slower than my PB, which gives me great hope for next year.  It was also faster than my last half which I ran last month.  I'd felt much fitter and stronger then, and have run a full marathon since then.

I did a lot of thinking while I was running.  One set of thoughts were related to teaching and may result in a separate blog post if I get time, the other was about this running nonsense.  I think I have come as far as I can in terms of improvement by myself.  I think I need to join a running club.  I have resisted so far because I'm not sure how well I'll respond to being told what to do and beaded through drills!  I hated PE in school and I really hated PT when I was in the TA.  I was always the slightly uncoordinated one who couldn't keep up with everyone else, huffing and puffing at the back of the group and trying to find every possible excuse to get off games.  I guess I dread feeling like that again, but at the same time I know I have take that risk if I want to improve.

So, now I have to find a running club that has training nights I can get to and who are happy to have me.  Wish me luck!
Posted by MrsBridgewater at 21:08 2 comments: