It seemed like a good idea at the time.... 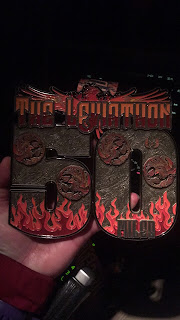 I have no idea what was going on in my head when I signed up to run a 50 mile ultra marathon on the Thames Tow Path.  I haven't run a marathon since June and since then the furthest I have run is 15 miles.  I am training for a marathon in November and somehow managed to convince myself that an ultra could comprise part of the training for this.  Oh, and the medals were pretty!  Phoenix are good at medals, but this time they have really excelled themselves.

Leviathon 50 had the added attraction that one could, should one so wish, drop down to the marathon distance on the day, while actually running.  What could possibly go wrong?  We've had weeks and weeks of perfect running weather, but suddenly the forecast had a little rain cloud over Saturday.  Just Saturday, Friday had been lovely, Sunday promised to be sunny and dry, so this little rain cloud couldn't be more than a bit of light drizzle could it?

I drove up to Walton On Thames in a light drizzle, that had cleared by the time I arrived, I was hopeful that it would remain so during the day.  I grabbed my number and a coffee from the Xcel Leisure Centre and listened to the run briefing.  I am always in awe of the people who get awards for multiple marathons - and today was no exception!  Walking to the start I chatted with other runners - one of the things that we talked about was the cost, 100 marathons (to join the 100 Marathon Club or to do 100 in 100 weeks) is going to cost in the region fo £4,000 in race entries alone!  I left my bag of spare clothes and snacks in the gazebo at the start and off we went.

There was no blue bridge on today's route (regulars of Rik's races will be in two minds as to whether this is a good thing!) as we went the other way.  The marathon distance was 4 out and back laps, the 50 mile route was 7 long laps and 1 short lap. I set off too fast, always a danger after a week where work got in the way of any significant running, and had to force myself to slow down as I knew that I was going to suffer later.  The weather stayed dry for the first two laps and then the heavens opened.  Miserable, cold, driving rain with a chilly wind coming off the river.  By the end of the marathon distance (that I clocked at 4hrs 27 mins) I was absolutely soaked, so paused for a change of running tops and to put on my waterproof.

I hate running in a waterproof, despite the fact that I shelled out a small fortune for a lovely goretex one, I can't bear the noise they make, and the fact that I end up feeling like I am a boil in the bag meal.  It says a lot about the weather that I kept in on for the rest of the race.  I also shoved a £10 note into the pocket as I had spied a cafe at the turnaround point and fancied a cup of tea.  I made a deal with myself that if I ran the entire 3.3 miles to the turnaround I could have a cup of tea.  To say that I had a sense of humour failure when I got there to find that they had closed would be a slight understatement.  I set off back along the river, only to spot a sign outside the Moseley Boat Club about their cafe upstairs.  Now, I didn't want to go all the way up a flight of stairs only to find that they didn't do take out cups, so I asked one of the club members who was doing something technical with a boat and was reassured that they did and told that I was obviously a bit of a nutter for running so far in the rain!

One large cup of tea (only £1.65) later I was enjoying a walk in the rain and thawing out my hands!  The large cup meant a longer walk break!  I decided to stop for a cup of tea here until they closed at 4pm. Throughout the race I was constantly doing mental arithmetic to make sure I could make the 12 hour cut off.  After the first couple of laps I had been running for 9mins and walking for 1min - with longer walking breaks to eat as I left the aid stations.  When I got to the stage when I worked out that 3 miles per hour would see me home before the cut off I felt so relieved.  I could just 'relax' and get on with it!

The path was getting very wet, the muddy bits were slippery and there were puddles the size of swimming pools, but one of the advantages of the appalling weather was that there was virtually no one else on the tow path!  Runners coming towards me were weaving, as though drunk, around the puddles.  The number of runners reduced dramatically as the day went on.  I think that only about 25 people did the 50 miles, and when you spread those out over 3.3 miles, it is possible to run for quite long periods of time without seeing anyone else.  I tried to acknowledge every runner I passed, lots of them were too focussed on what they were doing and/or what ever was playing on their iPods to respond, but to those who chatted for a while and offered words of encouragement I must say a huge thank you!  Likewise the marshals - standing in the rain and wind for hours at a time, making sure that we were all safe and encouraging us onwards - thank you!

As the hours went on I regretted forgetting my headphones.  I don't tend to listen to music or audio books during races, but the combination of aching legs, miserable rain and many, many miles meant that a distraction would have been very welcome.  It would have helped me displace my ear worm (a single line from The Schuyler Sisters from Hamilton) and made the miles pass a little more quickly.  As it was I put together a little plan that might just work to get our sixth formers running a half marathon sometime soon.  This will involve a lot of paperwork - but I hope that it works out!

At the end of the 7th lap I grabbed the last slice of cold pizza from my bag, got my head torch out, put the head torch on the table and ran off with out it!  Bother!  It was getting dark - it must have been  just after 6pm when I set off for this last 'short' lap, but by the time I'd realised I was not going to add the extra distance to go back and get it.  I ran the 'light' bits and walked the dark bits - it wasn't worth tripping over a tree route at this late stage.  But, a bit of mental maths told me that sub 10hrs might just be possible.  Due to the rain, it was difficult to see my watch, I walked as fast as I could, ran as fast as I could and hoped and prayed that it would be enough.  The finish involves running past the last aid station and doubling back to the finish - so I shouted out to ask if I was going to make sub 10 and was assure that I would.  In my mind I was sprinting but I probably looked more like this:

I did manage a sub 10hr - 9hrs 54mins which, given the lack of training and the awful weather, I am thrilled with - that's an average of just under 12 minutes per mile.  The medal is awesome, the organisation was brilliant, I cannot thank Rik and his team of marshals enough.  I even got to ring the PB gong!

I did manage to leave my favourite running top behind (I hope that I am reunited with it soon) and the  entire malt loaf that I lovingly buttered on Friday evening got forgotten about (how?  I'd been looking forward to this for days) and my feet and legs absolutely hate me, (I may regret having my tutor base on the second floor tomorrow morning) but the good things do outweigh these drawbacks.   Not sure I'll rush to do another 50mile race soon, but I am booked in to do Endure 24 again next year.  Surely I can go further than my 70 mile sticking point next year?
Posted by MrsBridgewater at 12:54 1 comment: