I've taken so long to run this race I've finished in a different age category! 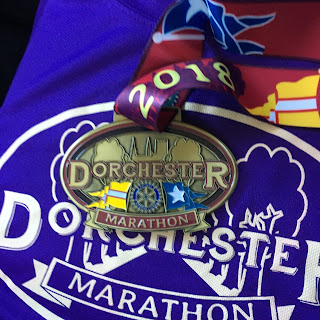 We drove down to Dorchester in rain so heavy that we couldn't hear the radio.  I snoozed in the back seat - I have never been a fan of early starts - only waking when we had to stop suddenly.  Our early start wasn't too early, which meant we arrived 15 minutes prior to the race briefing.  This is an excellent time to arrive, even though I would normally arrive much earlier, because it doesn't give you time to fret too much - just enough time for a quick run to the loo.  The weather was AWFUL!  The rain was coming down in stair rods so I left my sunglasses in the car and grabbed a hat instead.  And why would anyone cover themselves in suncream that was just going to be washed off in the rain?

There wasn't much time to chat with people at the start, but I did catch up with a few people I hadn't seen for a while.  At 8.15am, as the race brief started, and when it was too late to go back to the car, the sun started to shine.  I wasn't too worried, the last forecast I had seen said that it would rain for most of the day.  How wrong was that forecast?

I wasn't sure what I expected from this race.  I ran it last year, but I was much fitter then.  I has sort of decided to adopt a run/walk strategy,  so set off running for 9mins and then walking for 1min.  That was great(ish) for the first relatively flat half of the race.  We went though some very picturesque villages, past houses that looked as though they were straight out of Country Living magazine, it was hilly but it would have been fine if not for my dodgy guts!  No idea what was going on but I spent rather a lot of time dodging behind hedges.   I considered pulling out.  At the aid station at 15 miles I spent a long time hiding in the village hall (very nice loos!) considering whether it was sensible to carry on.  I may have cried a bit.  I may have needed a bit of TLC from the people there, but I decided  to carry on.

I was greatly helped by the company of 'Cupcake' from Itchin Spitfires - we'd been doing that leapfrogging thing for a while, but soon after 15 miles started chatting, deciding that we were having a bit of a shit time - who knew it was going to be so hot? - and what was necessary was a bit of common sense and just bloody finishing this thing.  We decided to walk the up hills, run the downhills and take the flat bits under consideration - we didn't need to think too hard about the flat bits as they were few and far between!  He'd been aiming for sub 5 hrs - but there was no way we were going to hit that goal!

The aid stations were great!  Portsmouth Joggers had one manned by blue haired mermaids, the love station was awesome - one of the best love stations, and there was a brilliant super hero aid station at around 17 miles.  All the aid stations were fantastic, many of them stocked with lots of great stuff to eat and always with friendly people to look after us all.  There were also a couple of unofficial aid stations - local residents who had decided that we all needed a drink/banana/spraying with water.

The hills in the second half were relentless, including the totally unnecessary entirely uphill mile 23 (or thereabouts - my frequent trips into the hedges seemed to have added considerably to my mileage) so we were walking rather more than we were running, but we were still, just about, capable of running. It was hot an humid, even when there was a breeze it was a warm and totally un refreshing one, but we were going to finish this marathon.  It felt as though we had been running for a very long time - days or weeks seemed to have passed since we had set out which led to the every so slightly hyperbolic comment that is the title of this blog post.

The 25 mile marker was a beautiful thing to behold!  'Not as nice as the 26 mile marker would be' grumbled the two people I was running with!  It was downhill from here, until the last 200m that were flat, so when we got close to the finish we went for it.  We may have looked like extras from a zombie movie, but in our minds we were sprinting!  Crossing the line was a huge relief, thank heavens we didn't have to run again!  Medals were collected - along with a t-shirt and a hug - all part of the WSR service!

It was my slowest road marathon - possibly my slowest ever marathon actually.  However considering I was going to pull out at 15 miles a finish is a win in my book! The race was well organised, the marshals were brilliant and the race village had a lovely atmosphere as everyone relaxed in the hot sunshine after the race.  I am hoping that I will soon stop looking like a lobster!
Posted by MrsBridgewater at 23:47 2 comments:

Wormwood Scrubs parkrun and a bit of family history.

I was supposed to be tail walking at Alice Holt today, but events conspired against me.  It ended up being easier to get to London than 9 miles up the road so I looked for volunteering opportunities in West London.  Wormwood Scrubs needed a tail walker and I needed to tail walk as I have a marathon tomorrow. 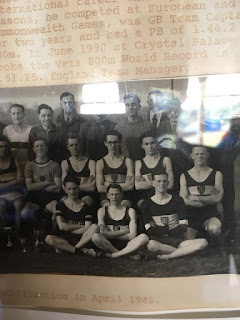 I spent a year living in Acton while I was a student and passed Wormwood Scrubs prison on my way too and from university on the tube but I had never noticed Wormwood Scrubs Park before.  My first impression was how big it was!  Then there was the added excitement of a pony on the loose.  The pony appeared to have been abandoned, but whoever left it in the park probably knew that there was a pony centre nearby and the pony was soon captured and taken off to the centre.

We gathered at the parkrun pop up flag thingy, chatted with regular Wormwood Scrubs runners and other visitors while we waited for 9am.  95 runners ran two laps of the park.  The route is all on grass, today the ground was hard packed but I should imagine it is fairly muddy in the winter.  It is also pretty flat.  A brisk walk with the occasional short jog kept me just behind the last runner.  That last runner ran every step of the way and managed a burst of speed as she approached the finish line - the lengths people will go to in order to avoid talking to me are quite extreme!  I think we finished in just under 42 minutes.

After the run we popped into the Thames Valley Harriers club house for coffee.  My father in law ran with Thames Valley Harriers in the 1940s/50s, Husbando mentioned this to one of the coaches who pointed him in the direction of some photos on the wall.  There are no names with this picture but the man in the glasses in the middle of the photo looks so like photos of my father in law, and the resemblance to Husbando is uncanny.  Originally I was planning to parkrun without Husbando.  He was working in London this weekend and didn't even have his barcode with him.  He decided that he had time to run while we were eating breakfast, so we had to ask the hotel to print off a barcode for him.  Had I gone alone I would not have remembered the TVH connection (if in fact I ever knew about it) and would have missed this little bit of family history.

Posted by MrsBridgewater at 21:01 No comments: