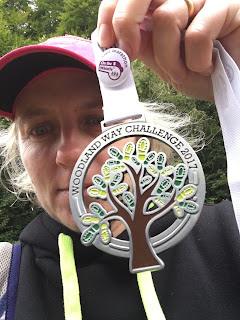 Embracing my TrainAsOne training programme did wonders for encouraging me to get out and run again.  I loved the variety - it got me out of the routine I had been in for a while and made me run honestly, by which I mean that I ran the distance the programme told me to run without stopping, rather than making excuses to stop and take photos!

I am not nearly back to where I was before I went away. In my mind I didn't need to worry as I hadn't entered any races until mid October... so it was something of a shock when a friend pointed out that I had entered an On The Whistle event.  In fact, on checking, it transpired that I had been so keen to do the Woodland Way Challenge that I had entered twice.  This was soon rectified - one of the entries was changed to a later event, and I didn't think much more about it.

I love On The Whistle events and not just because I love the people behind the name!  The events are small, low key and loads of my running family take part.  The out and back or looping nature means that you get to see people again and again - so if you don't know anyone at the start you will by the finish.

But today I wasn't feeling the love for going out and running 'a race.'  Technically this wasn't a race - it was a six hour challenge, I only needed to complete one of the 3.8 mile laps to get a medal, but at every other On The Whistle event I had clocked up at least a marathon distance.  I didn't think I could  run a marathon - not when I hadn't run more than 9.25 miles since Endure 24 back in early June.  I wondered if I could get my mum to write a note to say I was off PE - heck - I was pretty sure I could forge her signature.  I decided that I would run a half marathon, then come home and make some jam.  In a choice between lesson planning and jam making it is nearly always jam that wins!

Arriving at the Queen Elizabeth Country Park I realised that although I knew a lot of people, two of the On The Whistle regulars whose company I really enjoy were not there.  I don't see them often as they live the other side of the county - but we've nattered our way through many a mile.  To be honest, due to his speed I normally have to resort to throwing insults at RH as he passes me, but poor PJ is probably sick of my company after running with me at Endure24!    We assembled and waited for the whistle.

The first 2/3rds of a mile is uphill.  Not hugely steep, but nowhere near flat.  I made a decision that I would run it at least once without stopping or walking - so off I went.  It hasn't got any flatter since last year!  We were all pretty bunched up at the start but the hill soon ensured that we spread out a bit!  The route was lollipop shaped, along gravel and chalk paths through the woodland areas of QECP, the sun was shining and I should have been having a great time.  But it was such hard work.

During my first lap I was thrilled to see PJ running towards me.  He wasn't taking part in the event, but was running around the route just to check it was properly marked before going to spend the rest of the day doing something more constructive.  We stopped and had a bit of a chat.  When I shouted that 'seeing him had made my day' I wasn't lying.

Halfway through the second lap I felt a blister develop on my left foot.  I've never really been prone to running blisters.  I've had awful blisters from silly high heeled shoes - but not from trainers.  At the end of the lap I changed my trainers and taped up the blister, but it was still rather painful to run on.  I set off up the hill adopting a walk 40 run 50 strides strategy.  I caught up with a few runners this way, but felt very sorry for the poor person behind me who kept almost catching me up when I was walking, only for me to pull away as I started running.  I can't count and talk at the same time - so couldn't explain that I wasn't really waiting for her to be on my shoulder just to start running!

Mid way through lap 3 (fuelled by Haribos, fudge and cocktail sausages no doubt) I began to think I could probably run the 7 laps needed for a marathon.  Heck, I could probably walk a couple of laps and still make it in under 6hrs.  Thankfully it then began to rain and I decided running in the rain for 3+ more hours was not fun.  The rain didn't last long, but my mind was made up.  I had other things to do, and I wasn't so desperate to run a marathon that I was going to spend over 6hrs doing it on untrained legs.  I wanted to be able to walk tomorrow - meeting new parents at school while looking as though I need a walking stick is not likely to inspire confidence.  I was doing 4 laps and that was that!

Once that decision was made it seemed much easier.  I could put a bit of effort in as I wouldn't be running for too much longer.  The last downhill was glorious!  My legs weren't shredded the way they would be at the end of a marathon or an ultra and I could really run down to the finish.  I rang the bell and finished the race - clocking up 15.5 miles.  I hung around for a while to stuff my face with more Haribos and see some friends finish/wish them well as they continued on for another 3+hrs.

I came home and made plum jam! 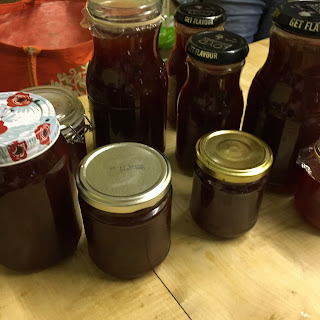 Back to school resolutions 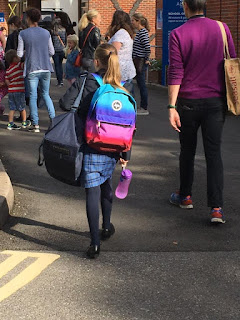 Back to school takes a while in this house.  We are 'multi schooled,' even if we had just one child we would have to tie up two school calendars as I can't see me teaching my own child, but currently we have four different schools to consider.  Five educational establishments if you consider the eldest at university - just as well my older daughter is taking a gap year, we won't have to contend with six different places until next year!   So the back to school madness started on Monday, but doesn't finish until tomorrow.  I'm not 100% sure when the university student goes back... but he is, at least in the right city!

This year has seen my youngest start secondary school.  She had her first day today and seems very happy.  For the first time ever, I am the last one to go back to work.  This meant that I could go with her and watch her march off, heavily laden with her back pack and PE kit, to embark on the next stage of her life.  I also got to pick up a very happy girl who had made new friends and is excited about going back tomorrow.  It hasn't been a big change for her - she has been at the same school since she was 2yrs and 4mths old, but there have been just enough differences to make it an occasion.

Tonight the two youngest were sitting at the kitchen table and one of them said 'Oh no - Mum's going back to work tomorrow!' and the other replied 'She'll be all stressy and tired in the evenings.'  I nearly cried.  I wanted to cry, I wanted to say 'I won't go back, I'll stay home.'  There is certainly enough to keep me occupied around the house and garden there, but I like my job.

I love my job.  I always knew that I would miss some things that my children did.  Sometimes a parents' evening for my students would clash with a school play at one of my children's schools.  Sometimes I'd end up sitting at a parents' evening, trying to remain resolutely positive and upbeat about my students' performance while worrying about what my children's teachers were telling Husband about them at their parent - teacher review....

I love my job.  But I wish it didn't take over so much of my life.  Maybe part time teaching is the long term solution, but at the moment finances dictate that we beed both the incomes.  So my resolution this school year is to work harder on getting the work-life balance right.  I will try to work more efficiently at school and not bring as much work home with me.  But more importantly I need to learn to leave emotional load at work.

It is either that or win the lottery.....

Posted by MrsBridgewater at 20:32 No comments: