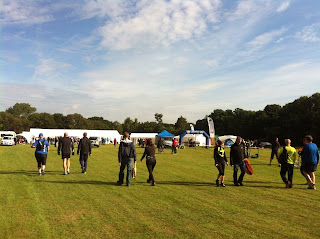 Until yesterday morning I was considering not going for a long run today.  My training plan said that I should run 15 miles, but I was tired and achey.  A new job  and marathon training will do that to you.  The new job is great, but I am still at the rabbit in the headlights stage, where lots of things seem to take longer than normal.  Until this weekend I  hadn't been to bed before midnight since the beginning of term.   Then, at parkrun yesterday morning, we talking about autumn marathons.  'You could do the Farnham Pilgrim tomorrow if you were feeling really keen,' said a friend.  I said, that would be nice but the Farnham Pilgrim wasn't until next week, and I knew that because I was signed up for the half.  Turns out that he was right and I was wrong.

I don't do trail running.  I like a nice bit of tarmac.  I don't mind hills, but running through mud, dodging puddles, avoiding tree roots is too much like bloody hard work if you ask me!  But... I'd paid £21 to enter the race, and I was supposed to run anyway, so scratching my head and trying to recall why I had signed up, I went to dig out my trail shoes.  My mood wasn't improved by the weather forecast.  Heavy rain and gales.  That made up my mind, this wasn't going to be a race, it was just going to be a run with a medal at the end.   I would wear 3/4 length running tights and a t shirt rather than a club vest and shorts, and take my 'phone with me so that I could stop and take pictures if the mood took me.

The weather this morning was lovely, but I didn't really take that on board until I arrived at the venue.  I got there early enough to see friends who were running the marathon off on their way.  The start area was well organised, and I met up with various friends and chatted and passed the time for an hour until it was time for the half marathon to start.  The first mile was downhill and on tarmac.  Lovely!  I knew that there were hills aplenty coming up - see my Garmin thingy for confirmation - so I didn't go hell for leather.

We were soon off road, and uphill!  For lots of stretches it was strictly single file, which was nice as it meant that you could just relax and run at the pace of the guy in front.  There were also stiles and gates, lots of them.  These involved standing in a queue, which was either quite nice because it gave me a chance to get my breath back after a hill, or a real nuisance because I'd just got into a nice rhythm and knew that it would be hard to get going again.  Also, I hate stiles!  Was jealous of the long legged men who seemed to jump effortlessly over them while I struggled.  Running through one village (ah tarmac!) we had the added obstacle of trying to pass a group of riders on skittish horses, and at another point we encountered a group of motorcyclists we had to weave our way around - it seemed that everyone was out to enjoy the sunshine today.

I'd been warned about a hill at 8 miles, that was steep and on sand.  8 miles came and went without much of a hill, but I did see an old friend who was marshalling and managed to lose a contact lens!  Running with only one eye functioning properly is interesting.  The blur is oddly distracting, and loss of 3D vision means that depth perception is non existent.  That's fine on lovely smooth tarmac, but a bit tricky on uneven trails.  This slowed me down a bit.

Then came The Hill.  I tried to run all the way up it, I really did.  But it was a fairly steep hill (between 9 and 10 miles on the Garmin trace I think) and it was on sand.  I really think that I might have been able to run all the way up the hill, albeit very slowly, had there not been people walking all around me. It was almost as though it was OK to walk if they were.  I didn't loose too much time, and I had time in the bank.  I had a time in mind that I would be happy with.  A friend, who is a much better runner than me, said she had run this race last year in 2hrs 24mins.  I wanted to do better than that time.  (She ran again this year, taking nearly 26mins off that time).   The views from the top of the hill may have been lovely, if I'd had two eyes to see them!

The downhills were steep and slippery, so no going full pelt to make up time.  The final 2 miles of the race were a steady, but not steep, uphill drag.  The last 3/4m being on tarmac.  I was amazed that I was overtaking people in the last 2 miles.  Running up the road through the village meant dodging some impatient drivers, one of them pulled right across the road forcing me to squeeze myself through an impossibly small gap - I bashed his 4x4 with my water bottle as I passed him. 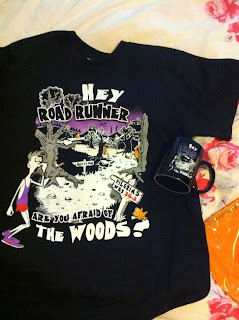 And then we were turning into the field we'd started from.  Not quite a sprint finish, but I did up the pace a bit.  As I crossed the line my name was called out - I do like that, makes me feel like a bit of superstar.  At the finish there were lots of people to place medals around our necks, so much nicer than having to dig around in a goody bag to find one.  There were soft drinks, and a vast array of cakes for finishers.  I bumped into the person who, I suddenly remembered, was responsible for me signing up for the race (doesn't take much - just wave an entry form in front of me), he was handing out cakes.
In addition to a fab medal (on a purple ribbon!) we also got a great t-shirt and mug.   I am still a Road Runner, I am afraid of the woods, and can't say I 'enjoyed' today's little run.  It was a brilliantly organised event though, there were loads of helpful, friendly marshals, more water (and cake) stations than I have ever seen at an event and the Start/Finish area was superbly organised with a great atmosphere.  The countryside is stunning, the entry price is reasonable, I got to see friends I haven't seen for a while.  All in all a good morning out - and it didn't rain until after I finished! 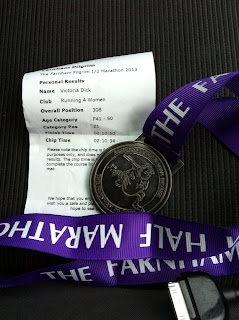 Posted by MrsBridgewater at 20:35 No comments: