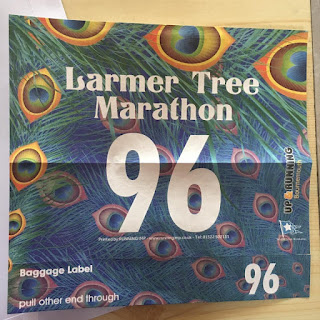 Today was a lesson in respecting the marathon distance.  I may have run a few now, but there is no place for becoming complacent about what is, by any stretch of the imagination, quite a long way to run.  I've had a few tough runs recently, culminating in the aptly named 'Plod' two weeks ago, but I was quite excited about today.  As excited as you can be when you are exhausted and overworked and still trying to sort out the house you moved into a few weeks ago.

I'd run the 20 mile race at Larmer Three Gardens last year.  And while I was running that I seem to remember thinking that it was silly to run 20 miles when there was a 26 mile option available, so that is what I signed up for, fool that I am.  The weather forecast was not promising, so we arrived with loads of layers, waterproofs. hats etc.  Numbers were collected.  Mine was so wrong it was almost right.

It is quite a long time since the last White Star Running event down in Bovington, so it was lovely to see all the regular characters.  We chatted away as we waited for the start.  I was on the look out for peacocks, while at the same time realising that the peacock leggings I was wearing were not the same, very comfortable, Tikiboo pair that I wore last year.  I have no idea where they were from, but they will not be worn again.  One of the many things you are told when you start training for marathons is that you should not wear something during a marathon that you have not road tested for a good few miles beforehand.  This oversight would come to bite me on the bum a few miles into the run.

The start was lovely, apart from the weather!  Damp and drizzly.  It was down hill and on tarmac, this was going to be ok.  I got to the first water station at about 6 miles feeling relatively confident and making fairly good time.  Within 2 miles that had all changed.  It was tough going, but not unrunable at this stage, the ground was either very slippery or very sticky.  At times it was like running over a huge tube of Prit Stick, it took lots of effort to even life feet off the ground.

By 8 miles I was walking along a totally flat path, sobbing.  Really sobbing, and just feeling a huge sense of despair.  And that was before I saw The Hill.  At least this was a reason to walk!  Or stagger...  From then on I think I did more walking than running.  To be fair, there were loads and loads of people walking.  It was hard to motivate myself to run when there were so many people walking all around me.  I had blisters on my insoles, from trainers that have never rubbed before and chaffing where no one ever wants chaffing from the evil leggings, which only added to my misery!  I chatted with lots of lovely people, who made the whole day bearable - bizarre conversations about conspiracy theories not withstanding. 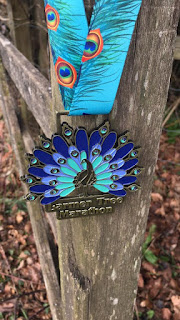 The route was varied, we ran though pretty villages, lovely woods and across fields with stunning views, the marshals and aid stations were supportive and enthusiastic.  The Love Station was fantastic as always - a much needed hug and dose of MTFU was administered here, along with handfuls of mini sausages, pretzels and jelly babies!  From here it was 'just' 6 long miles to the finish.  One hair raising descent and a long slog uphill were involved, but the end was in sight.. almost.  The trademark '400ish yards to go' sign came and went and all that was left was a nasty gravelly path, past a folly to the finish.  I managed to overtake a fair few people as my desperation to get this ordeal over and done with manifested itself.  I crossed the line and was given a medal and a hug, by one of the regular WSR team.  She has been at every event I have done, and always greets me with a smile and a hug- I really wish I knew her name!

After sitting down on a conveniently placed chair and getting my breath back, I went to get my lunch (included in the entry price) while the three of us who had travelled down together reassembled and rehydrated before the journey home.

Thank you to the team from WSR for an excellently organised event.  I promise to be in a better mood next time...