The longest f*cking half marathon in the World. 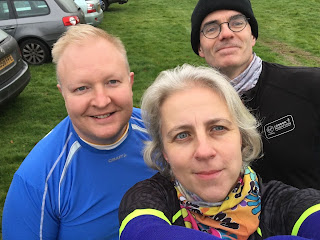 I've done some silly things in my time, you've met Husbando so you know this to be true!  To be fair today's outing didn't seem like a bad idea when I started planning it.  We need to go back about a year to set this in context.  I won a raffle!  I never, ever, win raffles, so really alarm bells should have started ringing back then, but win a raffle I did.  Andy from White Star Running drew my name out of a hat (or rather his dog, Bryce, snuffled around looking for a piece of cheese in a bucket and my name was the first one to fall to the floor).  My prize was 4 race entries and various other bits and pieces that I don't recall (and haven't yet bothered to collect!)   Now this put me in something of a quandary as I had already entered most of the White Star Races I wanted to do in 2017, so I put my thinking cap on... 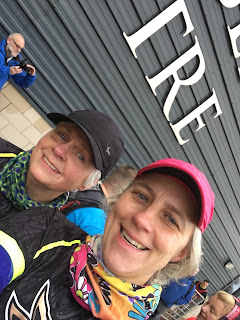 I knew that Bovington had not yet opened for entries and I'd thoroughly enjoyed last year's Bovington Marathon so decided that I would use all 4 tickets for the same race, and give the other three places to friends as Christmas presents.  When the race was announced the full marathon was on the Saturday and the half on the Sunday, so that meant an easy choice - Husbando was not going to take a day off work so close to Christmas, we'd all do the half.  Sorted.

In February another friend of mine, TG, started running and idly said that he needed a goal.  I said he should come and run the Bovington half with us - I'd get it for him as a Christmas present.  He seemed enthusiastic but today admitted that it was easier to commit to running a half marathon than to say no to me!   And to complete our merry little gang I decided to buy a place for SW, you'll remember him from blog posts about Tanzania, we no longer work at the same school so I don't see him as often as I'd like. 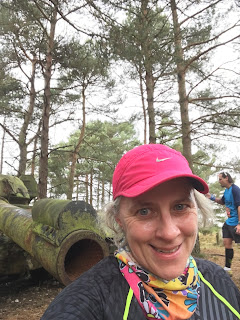 So, hardly a bad plan.  In fact, I thought, quite a nice plan.  What better way to celebrate the first weekend of the Christmas holiday?  Except that, being the first weekend of the holiday, the lurgy that had been festering away and that I had been holding at bay by sheer force of will and because I was too busy to be ill, decided to take advantage of me relaxing to develop into something more akin to actually being ill.  Having gone to bed at 8pm every night for a week and deciding that I was too ill to run parkrun yesterday I managed to convince myself that I would be fine to run a half marathon, in the mud and rain, on the Sunday.  After all, I've run marathons with the beginnings of whooping cough, a half marathon would be no problem.

The benefit of running the half was that we had a more leisurely start to the day.  We didn't have to leave until 7.30am, five of us travelling down in one car, meeting SW, his lovely fiance and Darwin the dog there.  We arrived, picked up our race numbers, had last minute wees, faffed with hats and gloves and made our way to the start.   After a brief race briefing we were off, I'd managed to get myself separated from everyone else at the start but was sure that I'd find them again soon.  I didn't.  MW, who had started slightly later than me did overtake me within the first few miles - when I was already struggling, we ran together for a while which was nice.  It was muddy and hilly but not too bad, I just couldn't breath properly, and had to stop to cough often.

At 7 miles in I texted my friends 'This was a mistake.  I feel awful.   Wait for me at the end. 7 miles in and I am dying.'  I thought that everyone was ahead of me.  I was already walking more than I was running, but at least I was half way through (WSR events often run a little long, so I'd budgeted for just over 14 miles for this race).  I plodded on, and on.  Just before 11 miles we came to a steep downhill section 'Oh lovely! The ski section!' said a cheerful voice behind me.  Soon after this I heard my name being called, I looked behind me and saw SW!  He'd been running with Husbando, TG and CW and had been behind me not in front of me - when he saw my message he decided to run on and catch me up.

It was great to 'run' with him and catch up on his news, but I could only run for very short sections by now.  We went on, and on, and on!  13.1 miles came and went.  We ran through rivers - as I picked my way carefully through one of them SW decided to act like the child he is and splashed right next to me - soaking me from waist to toe.  I called him a very rude name - the people around us seemed to think it was hilarious.  I, meanwhile, had soaking wet leggings and an uncomfortably moist gusset - SW stated that he often has that effect on the ladies!

At 14.5 miles we decided to 'dig deep' and run to the end.  Just after 15 miles we gave up on that idea.  When would this race ever end?  No time soon it seemed!  Just after 16 miles we crossed the road outside the tank museum - the end was nigh, now was the time to see what we had left and we did manage to run to the finish.  In my mind we looked like Mo Farah and Jo Pavey, but in reality we probably looked more like Richard Briars and Honor Blackman in 'Cockneys Vs Zombies.'  As we approached the finish line SW's fiance and Darwin were there to cheer us in - Darwin was very vocal - and then it was all over.  Thank god!  16.62 miles by my Garmin, 17 by some of the Strava feeds I saw. 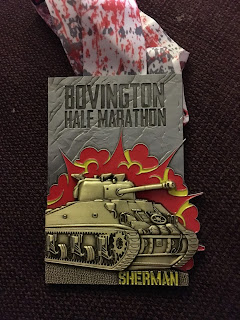 MW had finished long before and was near the finish with warm jumpers.  I grabbed a cup of tea and made my way back to the car to wait for the others, SW et al had to go on to get to a football match.  We saw the other three as they approached the finish - but I could not shout - my voice wasn't working at all!  TG did amazingly well.  It was a very long course and, while it did rain towards the end, it wasn't as cold as yesterday - had it been he could well have been in trouble.  I apologised to him, to all of them really, for forcing them to take part in such madness.

Distance aside, I believe some last minute re-routing was required, this was another great WSR event.  And had I been hale and healthy it would have been a very enjoyable day out.  I am now off to bed for about a month to see if I can get over this silly cold.

Posted by MrsBridgewater at 20:54 2 comments: