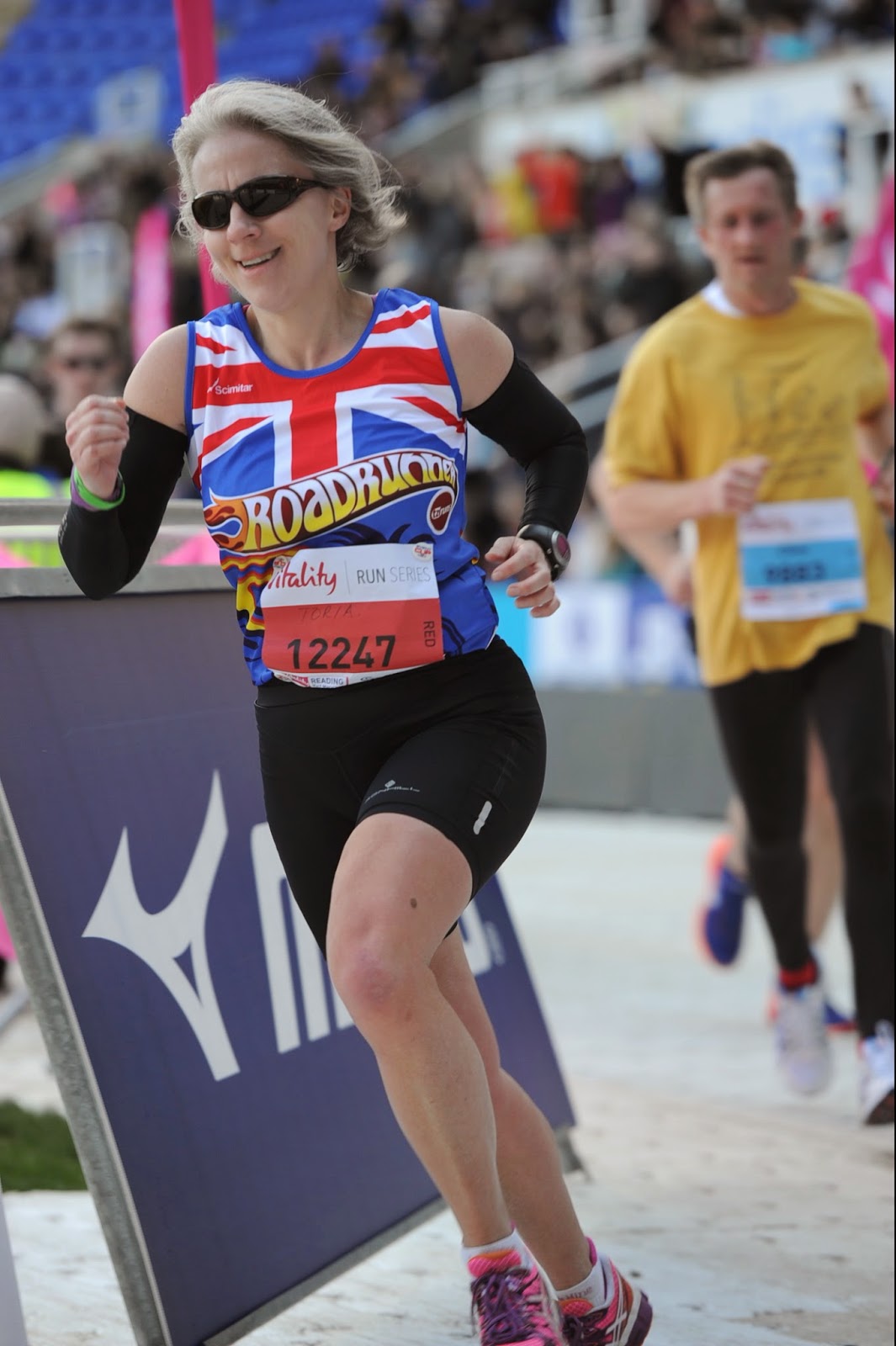 The sharp eyed among you will realise that I ran a race last weekend and did not blog about it.  Shock horror!  Had I lost the ability to type?  Was my internet connection down?  No, I just had a bit of a duff race and didn't feel that I could write about it.  Reading Half Marathon had been marketed as having a 'new route' which was 'fast and flat.'  It didn't seem that different to previous years in terms of hilliness, but I had started the race feeling a bit nauseous and as I ran I felt worse.  I threw up 4 times in 13.1 miles - classy!  By the time I finished I was dehydrated, and I swayed across the finish lines with my vision blurring.  Luckily a friend spotted me and grabbed hold of me so that I didn't add passing out at the finish to puking my guts up around Reading!  My stomach muscles ached and I was disappointed with my time.

The fact that I was disappointed is silly.  This time last year I would have been thrilled with a half marathon time of 1hr 50mins 58secs.  And a bit selfish!  I have friends who can't run because they are ill and injured - I can run, and the weather was beautiful.  I even got a fabulous race photo!

However since Reading whenever I have run, or even thought about running, I have felt sick.  Even running parkrun (about which I want to say a lot so will probably do another blog post) with Freddy yesterday made me feel a bit icky.  There is nothing wrong with me, it is all in my mind - but that doesn't make it any less annoying.  So that's why there was no post Reading blog. 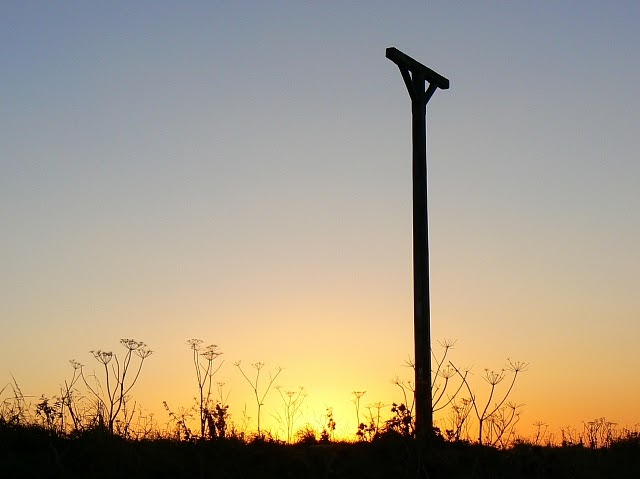 Fast forward to today.  In a fit of enthusiasm earlier in the year I entered the Combe Gibbet to Overton 16 mile cross country race.  "It'll be fun!" people told me.  So I signed up.  My record with cross country this year hasn't been great, I've only done two other races, G1 and G2 - and both of them have resulted in my hurting myself and swearing a lot.  Today, with the clocks going forward during the night, I was glad of an afternoon start.  I thought it might allow the weather to improve.  16 miles in the rain didn't really seem like fun.  We were bussed from Overton to Combe Gibbet, through chocolate box villages along winding roads and arrived at our starting point in a howling wind.  It was a struggle to walk up the hill from the car to the gibbet.  It was, to say the least a somewhat exposed location!  So exposed that a few of the boys, who didn't think to check the wind direction, ended up spraying themselves, and possibly their neighbours, when having a quick pre race pee.  It was funny to watch.

Thankfully we set off down the hill we had struggled up.  The wind was behind us and propelled us forward.  It was hilly but not too steep, the ground underfoot was varied.  We had been informed that the first 5 miles were wet, the second 5 were sticky and the last 5 were bone dry.  And it had, at last, stopped raining - or at least I think it had, the wind was so extreme that it was hard to notice anything else.  I wore a running jacket for the first few miles, then got too warm and tied it around my waist where it acted as an effective sail - sadly not always steering me in the direction I wished to travel.  I threw up twice before 7 miles.  Hmm.

Some of the paths were very uneven and slippery.  At 7.5miles I put my left foot down at a daft angle and it twisted under me.  This is the foot I damaged at the end of January.  It hurt.  It hurt a lot.  So much so that I thought I would have to quit.  I thought I would hobble on to the next marshal point and see how I felt.  I don't like quitting, so I was doing the maths in my head to see if I could make the cut off (get to 12 miles by 2hrs 30mins or be taken of the course).  I could, I thought, just.

I got to the next marshal point and found out that it was a mile and a half to the next one (on the other side of the A34 after going through an underpass).  My foot had eased off by some point by the time I got there and the ground here was smoother, so I though I'd carry on.  I was mostly walking at this point, but that was OK, this section was a long gradual hill and with the wind still blowing for NATO I was concentrating on staying upright.  I chatted with a few people as we walked/ran.  The weather was improving but the wind was here to stay!  I got to 12 miles well within the cut off time, and my foot was feeling a bit better.  Still painful, still sore but not agony.  I thought it was just about possible, if I could pick up the pace, to finish in 2hrs 40mins.  The last 4 miles were more downhill than uphill, but the downhill hurt my foot more.

I pushed on.  I was overtaking a lot of the people who had passed me back at 7.5miles - which was nice - and the last section was on road, which meant I didn't have to think about where I was putting my feet.  I ran as fast as I could to make sure I could get that sub 2.40.  As I ran into the finish field there were 2 men ahead of me running together, I picked up the pace and manage to finish between the two of them.  The man I chicked was Steven King - I don't think he was the author! 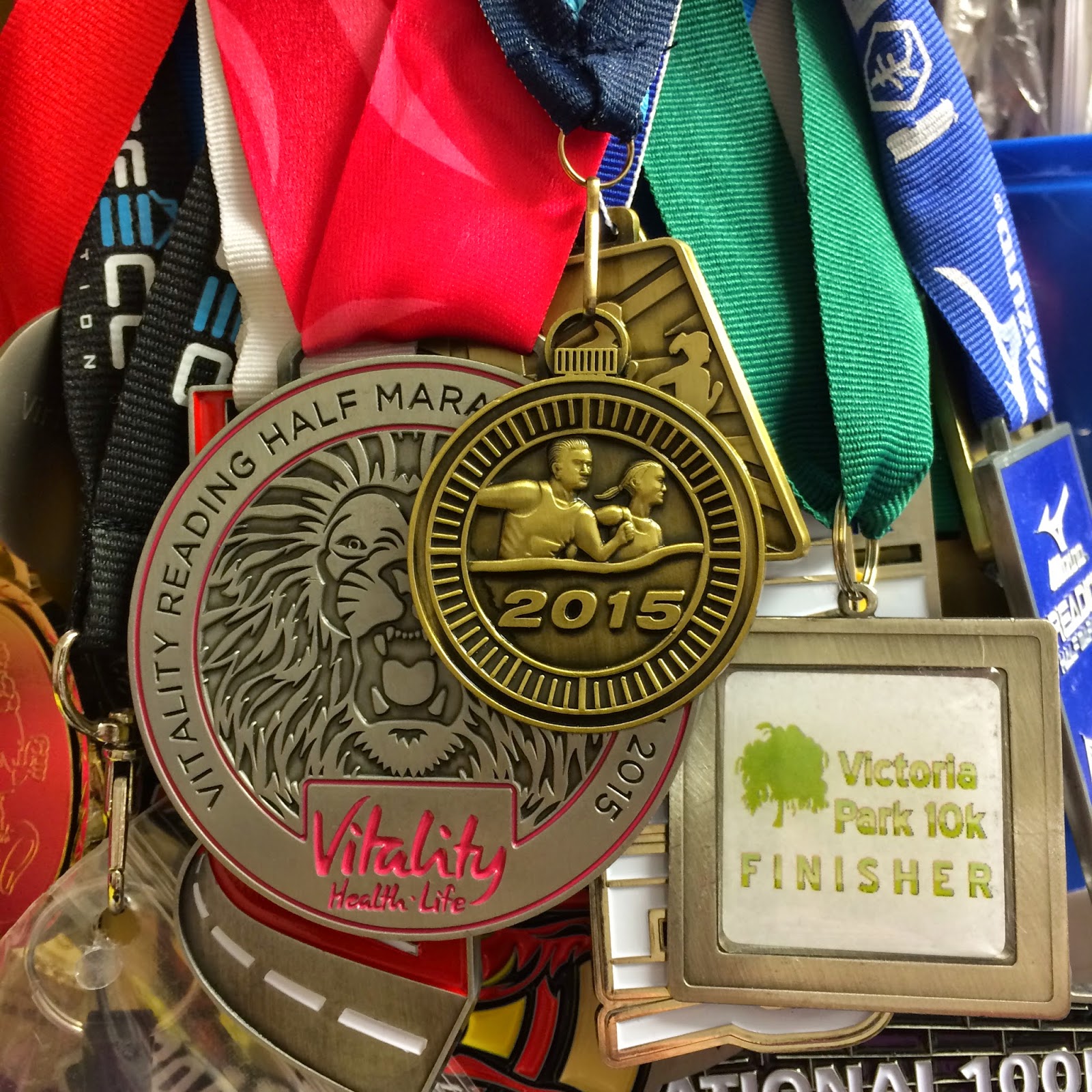 I crossed the line, collected my medal and swore my way across the field to a group of friends.  "If I ever talk about signing up for another f*cking cross country race you have my permission to f*cking shoot me!"  Apparently in the course of 30 minutes I uttered one sentence that did not contain any swearing.  I hope I was polite to the ladies serving tea and cakes!  But I had done it!  2hrs 39mins and (I think) 48 secs - nothing like cutting it fine!

Would I do this race again.  Hell no!  Would I recommend it to a friend - yes I would!  From the luxury coaches conveying us to the start to the tea and cakes at the end this was a brilliant little race.   I couldn't help but think what a lovely route this would be to walk along on a summer day.

Garmin link here - for anyone who wants a giggle at my comedy splits!


Posted by MrsBridgewater at 21:47 No comments: 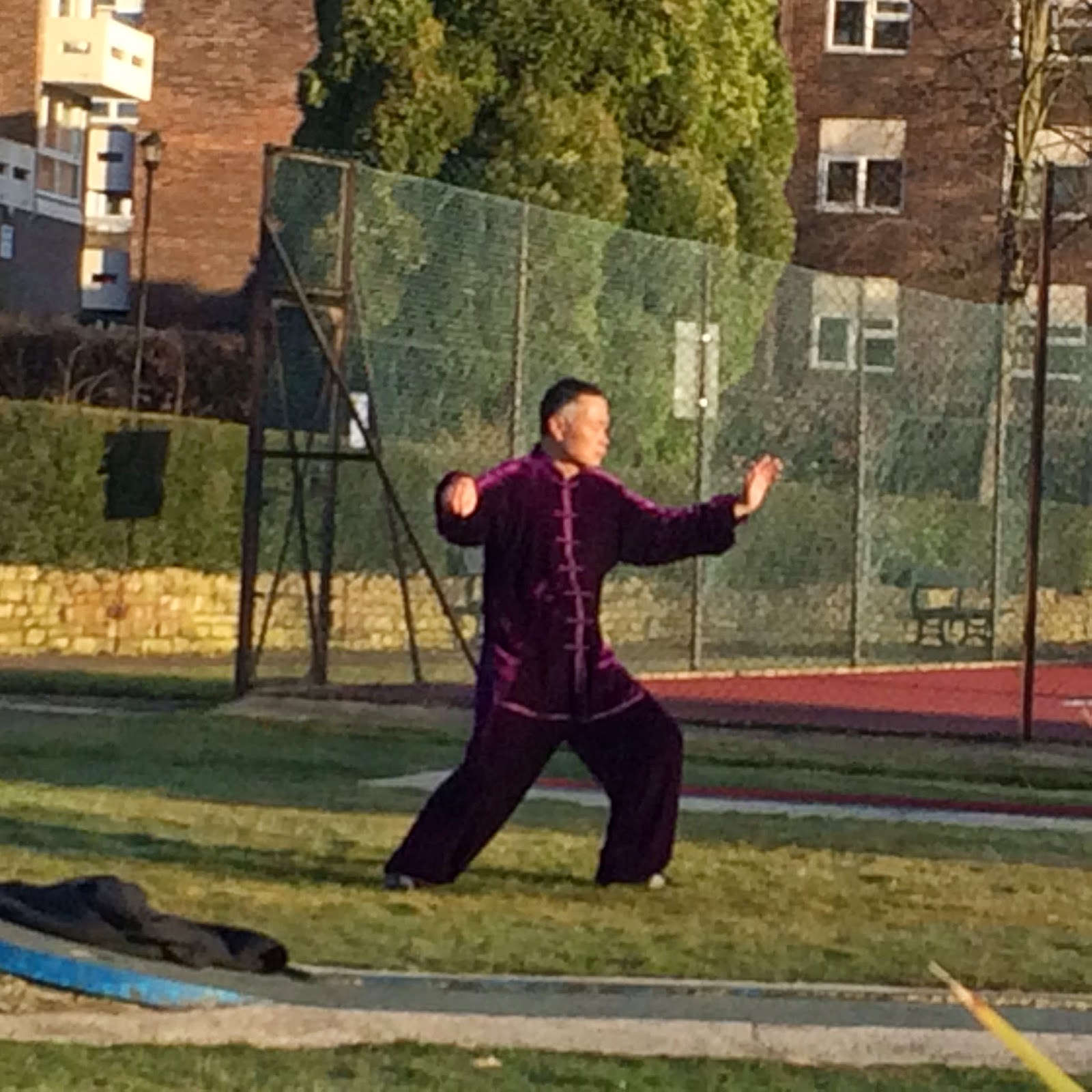 Now, living in deepest, darkest Hampshire means that one doesn't often see Tai Chi outside of a sports hall.  When we lived in London it seemed that alfresco Tai Chi  in Holland Park was de rigueur.  I was delighted to spot this gentleman in Woking Park this morning.  I was glad that I had arrived early and had a few moments to watch him.

The journey into Woking was easy, the race village opened at 7am and the road closures didn't come into force until 8am.  I parked easily, and followed the throng of lycra clad bodies to the venue.  I knew I'd arrived early as there was no queue for the loos!  The sun was shining and, while it was chilly, I decided that a vest top and shorts would suffice.  Having arrived early, I had no I had no problems checking my bag at the baggage storage in the leisure centre.  When I left the warmth of the leisure centre to make my way to the start the queues just to get in were huge.  I think many of them may have been late to the start. 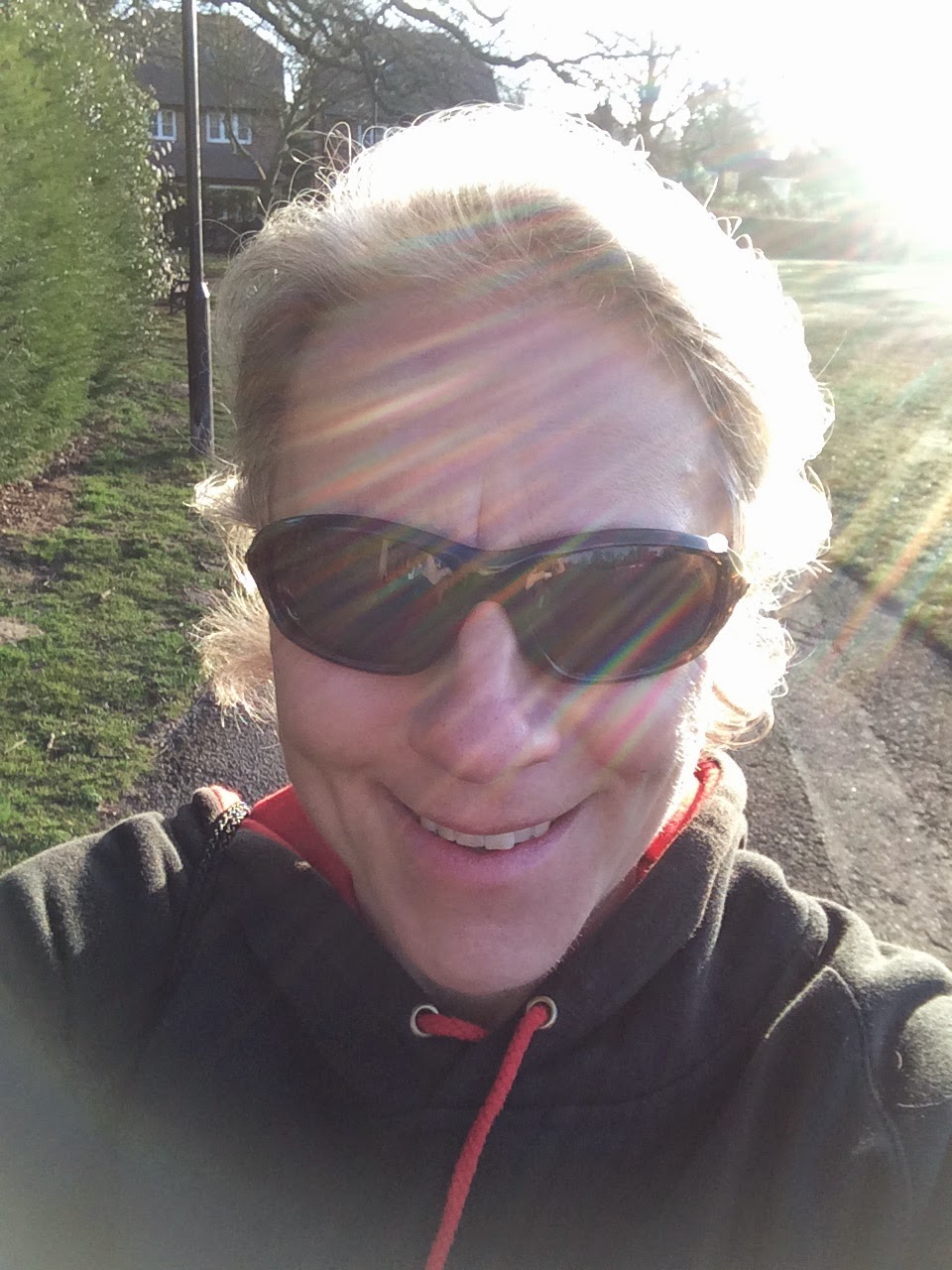 I chatted briefly with a much faster parkrun friend before he battled his way to the front starting pen and then spent a few minutes chatting with people around me before we were off.  As will all big races, it was crowded at the start, and a fair bit of weaving around people was required before I could get into a rhythm.   It may be different if you are one of the very fast runners at the front - but, as a middle of the road runner it is always a bit of a bun fight!  It was somewhat disconcerting to run towards the start and encounter photographers with tripods facing towards one - I wonder how many surprised faces will have been photographed?  There were also several traffic islands that were not well marked - it is really hard to see a kerb at ground level when running in a big group!

There was plenty of banter between runners, and there were lots of supporters dotted around the course to cheer the runners on.  On a switchback, at about 4 miles, I heard those words that every teacher dreads - especially when wearing lycra shorts - 'Hello Miss!'  I needn't have panicked too much - it was a colleague not a student who stormed past me and is probably blaming a brief conversation with me for missing out on a sub 1.40 time by 9 seconds! 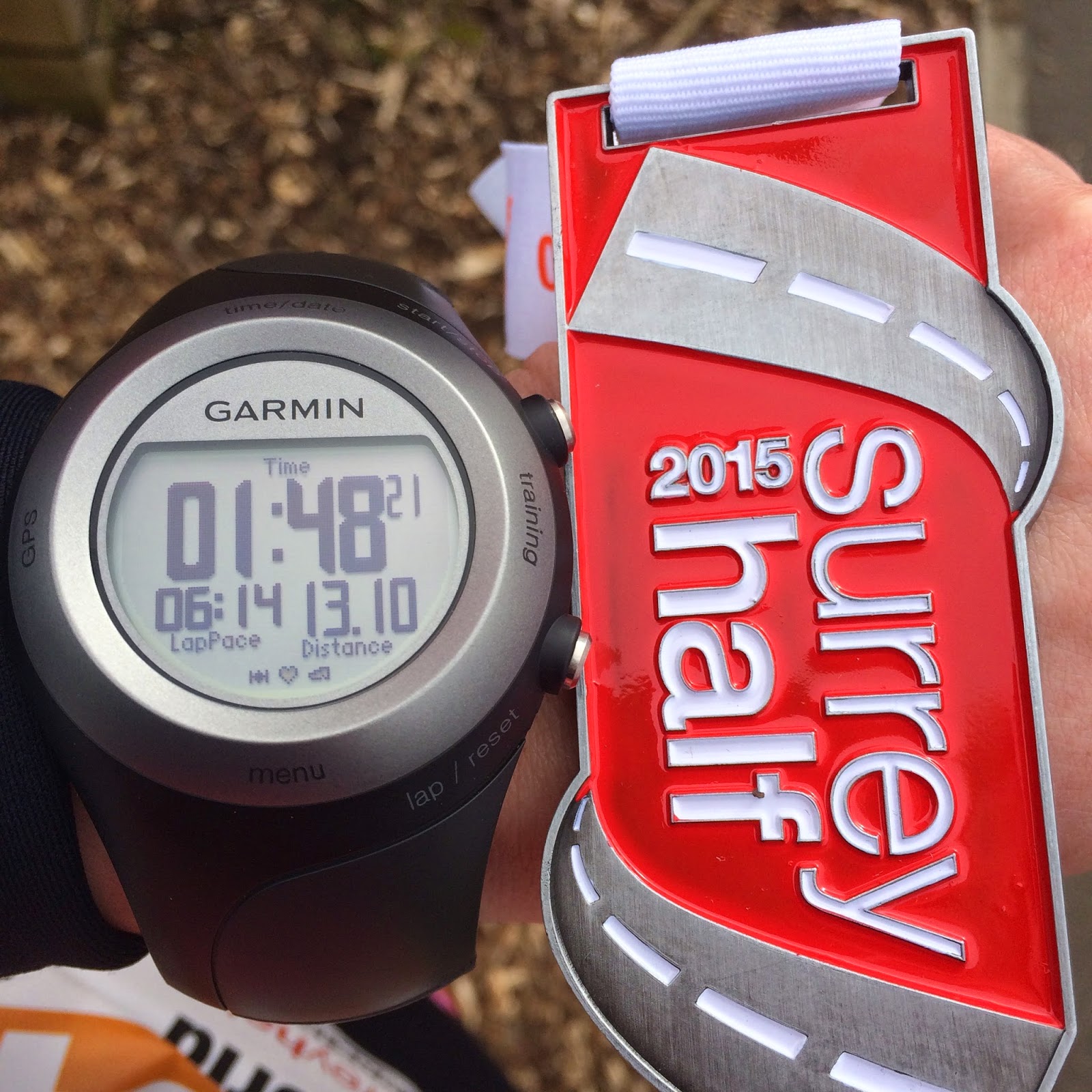 I was running fairly well until about half way.  I'd forgotten to strap my foot up and it was beginning to throb gently.  I eased off the pace.  This was, after all, supposed to be an expensive training run with a medal at the end!  I decided to run the rest of the race at, what I hope will be, my marathon pace.  9min/mile.  I didn't quite manage to slow down that much, but, poorly foot aside, I felt fairly comfortable.  The route was not hilly, but there were long gentle inclines to contend with.  The miles ticked by - rather quickly, the markers seemed to be placed just before my Garmin registered each mile.

And soon we were back to where we had started!  Running to the finish I heard my name being called out by a friend.  That gave me the spur I needed to think 'sod these well disguised speed bumps' and put on a final spurt of speed to get over the line.  While not a PB (by 4 mins) I am aware that I would have been beyond thrilled with this time last spring, and it is my third consecutive sub 1.50 half marathon.  Whether I can do better at Reading is another matter.  If I don't manage it then there is always Hackney  which I am running for UNICEF.    (I'll  be blogging about running for charity in the next few weeks - I just need to collect my thoughts!)

There was no goody bag as such - but that was no bad thing.  We could collect food (mostly nutty stuff) and a drink after being given our medals.  And goody bags tend to be filled with flyers for races that I either a) already know about and am signed up for or b) know about and don't want to run.  I grabbed a sports massage from Guildford Sports Clinic before collecting my bag and heading home - getting home took me as long as running the half!  All the roads I'd used to get there were still closed and the sat nav couldn't cope with me choosing which direction I thought looked hopeful! 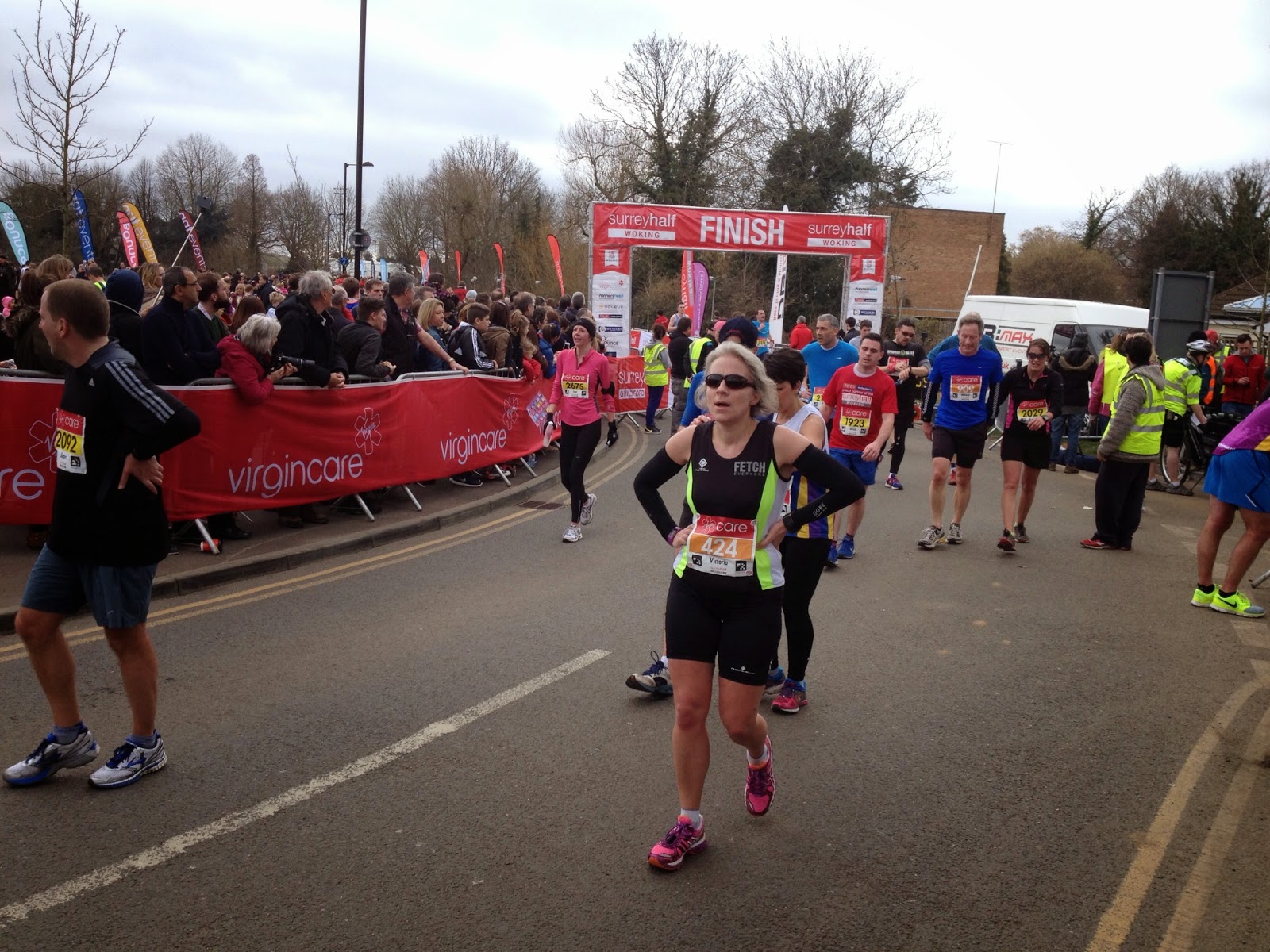 (Thanks to Nick for a picture of me looking just about finished!)
Posted by MrsBridgewater at 17:44 No comments: