I am a human hurdle! 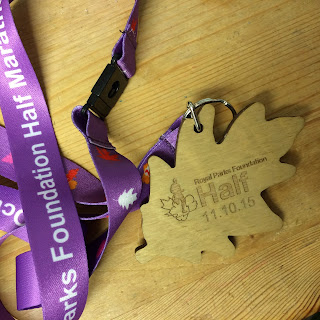 Another early start for another race!  We hitched a lift with Husbando and were in London and eating breakfast at Pret a Manger by 6.15am.  We were barely awake but we made our way safely to Hyde Park for my 5th consecutive Royal Parks Half Marathon.   The atmosphere in the race village was great, it seemed busier than in previous years and I do wonder if there were more runners this year.  The queues for the baggage tent were much longer than I remember in previous years, this meant I cut it fine getting to the start line - this had the knock on effect of meaning that I had no time to avail myself of the portaloos , so that was a bonus!

I'd met up with a couple of friends before the race, including another lady from the village who I hadn't known would be there, but I found myself on my own in the start pen.  I chatted with a French couple in their Paris Marathon finishers's t shirts and waited for 9am.   It was a little bit chilly, but the sky was clear and it looked as though we would have great running weather.

The course this year took a slightly different route, due to work on the cycle lanes on the Embankment, but the best bits of the 'non park' section were still there.  Running through Admiralty Arch and down the Mall in the sunshine is hard to beat.  Apparently the lovely people at UNICEF have a photo of me running through the Arch in the rain during my first Royal Parks Half.  I remember emailing them the photo - but can't find it anywhere on my computer!

From the first, my right quad was painful, so I didn't push it too hard.  I saw a parkrun friend between mile 3 and 4 (at Aldwych) and mentioned it to him as a reason why I would not be even trying to keep up with him (he finished in 1hr 34mins!) but I was happy pootling along at my own pace.  There were many more supporters than in previous years and the roar as we reentered Hyde Park was immense.  We weaved our way backwards and forwards through the park and it was all going well.  Yes my leg hurt, but it was nothing I couldn't put up with.  Then, shortly before 7 miles we turned a corner, I put my right foot down and my leg sort of crumpled underneath me.  A couple of runners hurdled over me. I am sure they had no option as stopping would have caused a pile up, but it was unnerving!  I pulled myself to the barrier and sat and sobbed.  I hadn't done any damage, but my leg was sore and I was a bit shocked at having gone to moving forward to flat on the ground in no time at all.  A couple of runners asked if I was OK.  I replied that I was fine, then told myself that I had to get up and finish - so I did just that.  Soon after I ran past the UNICEF supporters - such a boost to hear them all calling out to me, and a few minutes later I ran past a lady who had called out my name much earlier in the race - she said 'Hello again!' and instantly became my new best friend! 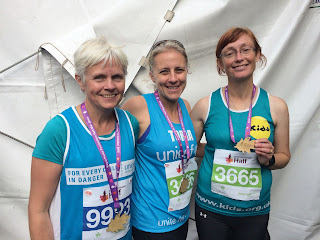 I ran slightly slower now because my leg hurt.  I listened in to conversations of those running around me and cheered as one of the runners managed to throw his water bottle over the heads of runners and into a bin!  The water bottles were given out without their 'sports caps' which seemed odd.  It meant that you couldn't easily carry an open bottle, so most people took a few sips and then dumped them, which seems a huge waste.   Suddenly we were nearly at the finish.  Such a contrast to the Two Tunnels Half a couple of weeks ago which seemed to go on and on and on.  We ran past the Albert Memorial towards the finish and I was overtaking people all the way.  There were people who were walking in the last 800m, which made for a few interesting manoeuvres as I hadn't anticipated them - but I crossed the finish line with a huge grin on my face.  It hadn't been *that* bad!  I'd finished and not in too slow a time (1hr 50mins 16 secs), my leg was sore but not painful anymore, the sun was shining, I had a new medal and a full goody bag and I was going to have lunch with Husbando and some friends! 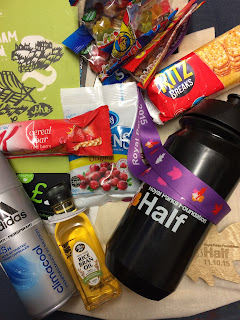 I waited for my friends at the UNICEF stand where I ate Haribos and got a massage while chatting to the people from UNICEF and the other runners.  I do love this race, but I think I lucked out when I chose to run it for UNICEF back in 2011.  The support they have given over the years is wonderful and it is lovely to be able to raise a bit of money for such a good cause.  I've said before, and will probably say it again, the fundraising is probably the hardest part.  If you feel at all inclined to make a difference to the lives of children in danger please click HERE!

I'll be back next year to do the whole thing over again - apart from the falling over I hope!  As half marathons go this one is really hard to beat in terms of atmosphere, organisation, scenery and PB potential.

Posted by MrsBridgewater at 20:15 No comments: