I can jump puddles...

... but I'm not very good at landings!
I've had a lovely couple of days in York, staying at the beautiful Middlethorpe Hall. Husbando was exhibiting his books at the York Bookfair, I was helping out and generally getting a bit of a break. Unbeknownst (isn't that a fabulous word?) to me, husbando had arranged to meet up with my lovely friend Andrya. Andrya now lives in Preston which means we don't see nearly enough of each other. We had a lovely day, lunch, mooching around the sales, catching up on gossip, that sort of thing.
I had a lovely run in the rain on Friday. Cold and miserable doesn't begin to describe it. After a very hot bath I took myself off to the Designer Outlet Mall for a little retail therapy. I've never been a huge fan of sales, outlet malls etc. I hate rifling through rails of clothes that are all mixed up, only to find that the one thing I vaguely fancy buying is only in a size 24! That said, I never give up hope, and on Friday was rewarded by a barginacious dress from Phase Eight and a selection of tops from Wolsey.
After a boozy early meal that evening we went to the cinema to see 'The King's Speech', easily the best film I have seen in a very long time. GO AND SEE IT NOW! Compelling viewing, beautifully acted with wonderful cinamatography.
We got home late on Saturday evening, today husbando is up in London at yet another bookfair, and I am supposed to be getting ready for my final teaching practice. I won't mention which school I am at here, in case I later say something about the school! I've been achieving simply amazing levels of procrastination. I've tidied my daughters' room, done the laundry, been to the supermarket, and been for a run.
The weather is beautiful. Blue skies, bright sunshine, such a lovely change from rain, drizzle, snow and grey skies. I set off on one of my favourite routes, I've been running in the town due to the grim weather, but wanted to see some green today.
It was not easy going, once I was off the main drag between the villages I had to tread carefully to avoid slipping. At one point (a mile and a quarter into my 6 mile run) I jumped up on the verge and ran along there because a car was approaching. I ran along the verge for a while and
then decided that, as the car had passed I should 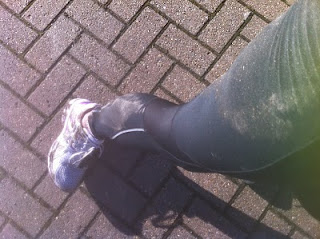 return to the road. There was a huge puddle, about 20' long and 4' wide, which looked very deep. No worries, I though, I'll just jump over it! Jumping over it was fine, landing was not! I landed on one foot (the one in the photo) which just carried on sliding. Luckily I slid away from the puddle so did not land in the puddle, but I did end up sliding across the road on my side! I took a few seconds to check that no one was there to see me, and then pondered how I would proceed. I took it cautiously for the rest of the run, knowing that I knew people in both the villages I would be running through, so if I needed too I would probably be able to get a lift home. My lovely, purple, Asics Kayanos are a little bit the worse for wear, as is my thigh! It always amazes me that a relatively minor fall like this can jar one's whole body. I ache all over now!
Posted by MrsBridgewater at 15:13