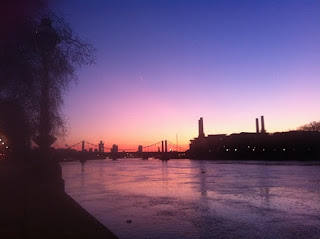 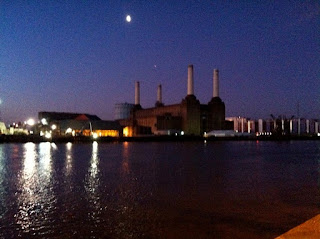 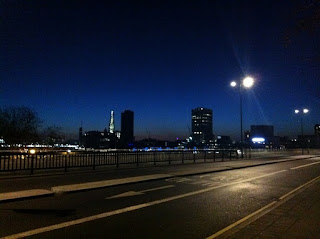 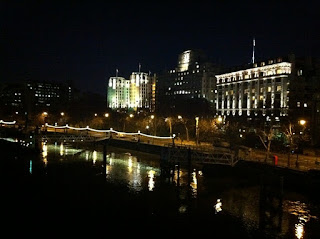 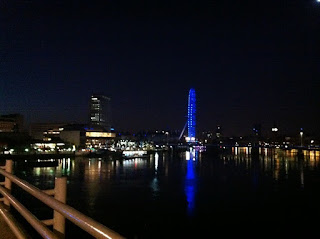 I got up extra early this morning to drive up to London with Husbando. When I say 'extra early' I mean extra early! We left home before 5am after a quick oat bar and cup of tea for breakfast. Husbando had a book fair to go to (hence the sparrow fart start to the day) and I quite fancied a bit of shopping, but wasn't prepared to give up my long Sunday run.
I spent a wee while on Saturday evening trying to plan a route, but despite having lived in London for a fair few years I ran in London, unless I was running for a bus! In the end I gave up trying to work out exactly where I was going to go and decide that I'd just go...
I set off from Russell Square and headed off down Southampton Row, and from there I took a leisurely run along The Embankment. I stopped to take photos on several occasions, I sometimes wish that I could run with a 'proper' camera as the sights I see are beautiful at times.
Four miles into my run, I remembered that I had wanted to run to St Paul's to see the Occupy St Paul's site. Too late by then as I had run in the opposite direction! As it was 6.30am (ish) on a Sunday morning I would probably only have seen a collection of tents. As I headed west along The Embankment the parks I had thought of running through were all closed - so I plodded along the pavement. It was so early that there weren't even any policemen outside the Houses of Parliament!
Traffic on my outward run was thin on the ground and I only saw two other runners on my way to Albert Bridge. I do love Albert Bridge, with its notice reminding troops to break step when marching over the bridge. It is a pretty bridge but it was fairly slippery in the early morning frost. I ran over the bridge and came back east through Battersea Park and back to the north side of the river via Chelsea Bridge. I've never been to Battersea Park before!
The last two miles were tough, I was tired and my blood sugar level was dropping through the floor. I saw far more runners on the way back, and they all looked super fit and deathly serious about their running! Only one nod and a smile from another runner - and none of them looked as though they were having fun.
Despite the tiredness and the hunger I really enjoyed my run. It was lovely to run somewhere different! The last time I was out and about on in that part of London at that hour of the morning I had been drinking all night in my student days! I ran 10 miles today in 1 hour 30 minutes.
In other news...
I've run just under 62 miles so far this year - not bad when you consider that I ran 14.7miles in total in January last year! I'm not running as fast as I'd like, but at least I am running! I continue to notch up pretty poor times at Basingstoke parkrun, but I bear in mind that there is always next week, or the week after! This Saturday's run was 'rather chilly!' Minus 3C saw runners finishing with frost in their hair! Never has a post run cup of coffee been more welcome than when it helps thaw out your frozen fingers!
Posted by MrsBridgewater at 20:45