It all started a few months ago, Ian Berry of TZruns mentioned that he was organising a second 'Kent Roadrunner Marathon' and had I thought about signing up.  "Yeah right," I thought, "I really want to run 17 laps !"  I told Ian that I'd run his marathon if he let me have bib number 69.  I'd never heard  of people demanding their own numbers and getting them, so thought I was on fairly safe ground.  How wrong was I?  Ian said yes, and I was signed up.  I wasn't even sure where the race was taking place until someone told me it was 'near Bluewater!'
I travelled down to Gravesend yesterday afternoon, with a brief detour to Bluewater to pick up things I'd forgotten to pack (hair brush, FitFlops), and checked in to a Premier Inn.  As I checked in I asked what time breakfast would be served, 8am!  Far too late for me when the race was due to start at 9am.  Dinner was eaten with friends (who were celebrating their wedding anniversary).  It was a huge amount of food, and after catching up with friends and meeting new people, I toddled off to bed at about 10.30pm.

Yesterday was surprisingly warm, and I was dreading a hot day today, but the sky was cloudy and the temperature was chilly as I arrived at the Cyclopark and parked my car close to the pavilion building before paying for parking, collecting my race number, timing chip and 16 wrist bands. The wrist bands were to save our poor addled brains having to remember how many laps we had run - a good plan as most runners come equipped with just 2 thumbs and 8 fingers so that counting beyond 10 would involve removing shoes and socks!  The system is quite simple, you start with 16, take one off every time you complete a lap and pass the start line, thus running your very last lap without a wrist band.  Simple really.

We assembled for the start, there were announcements for birthdays, 100th marathons and then we were off.  The first 9 miles were fabulous, if a little too fast, but then I developed a shooting pain in my right foot.  I thought it was a blister, so took of my shoe and had a look, but nothing there... It was agony to put my foot down, still, at least it slowed me down to a more manageable speed.  I was ok-ish until about 17.5 miles.  Then it all got too much, it hurt a lot, and the idea of running round and round the track again and again lost its appeal!  Passing the finish line was pure torture - the temptation to stop was huge.  I walked through the water station each time I passed it, I detoured to the loo 5 times, I stopped for a chat with a friend who was marshalling.  "Is it OK if I stop?" I asked, she told me to do another lap and see how I felt, walking if necessary.  So that's what I did.

Whilst I can't say I'm a convert to laps, they do have some interesting features.  You get lapped, and you lap others.  I was lapped by the first man at 4 miles into the race and the first woman after 6 miles.  It was good to see these speedy runners whizzing past, normally they are so far ahead that mere mortals like me don't get to see them.  Lapping other people was an unusual experience for me - and I lapped some people several times. It was a very friendly atmosphere, lots of banter between runners who knew each other well or had only just met.  My frequent loo stops confused people as I'd suddenly be behind them again and working to catch up!   17 laps also ensures that you become very familiar with every twist, turn and undulation!  A slope that you barely register on lap one becomes a mountain during the final few laps. 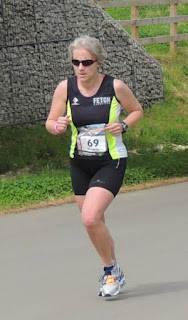 I'd set out today aiming for 4hrs 20mins.  By 17 miles in I didn't care how long it took, I was just going to finish this thing.  I couldn't do the necessary maths to work out how I was doing.  At the beginning of the penultimate lap I worked out that if I could do each of the remaining laps in about 15 minutes I could still get my PB.  So I walked to the water station, had a couple of cups of water and set off at a gentle trot!  I was so thrilled to get rid of my last wrist band that I threw it to some friends in the crowd. Shedding that bit of weight obviously worked and I picked up the pace.  Suddenly I was running at sub 9min/mile pace.  I caught up with a runner who'd left me behind ages ago and we ran together for a bit, before I ploughed on leaving him behind.  I got to the top of the last steepish hill and walked for about 100m, I couldn't run... but my pace still stayed below 9min/mile pace.  I started running again as I turned the corner to the uphill slope to the finish, I kept pushing on, the last quarter mile shows a pace just over 8min/mile.  I've never been happier to see a finish line.  The gun time was 4:16:17, my watch showed 4:16:00 but whatever it was it was a 6+ minute PB after the toughest run I have ever had.

The medal we were given is HUGE, ostentatious and heavy on a fabulous custom ribbon! I staggered back to the car with it round my neck, it really felt as though someone had moved my car... I'd parked close to the pavilion, but this walk to the car was taking ages!  Then a return walk to the pavilion with wallet to buy lunch and to pay for a massage.  It was lovely to sit around and chat with people I'd met during the run.

After lunch I said my goodbyes and thanks to the lovely race marshals and to Ian and made my way home.  I did have to pull into a layby for a snooze at one point, but got home safely in the end.  I'm looking forward to seeing the race photos - the photographers were so friendly and encouraging!  As for tonight - an early night beckons! 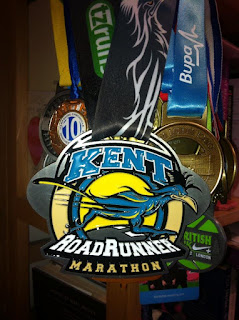