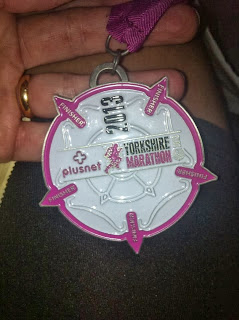 I've been to York lots of times, but I always seem to forget just how far away it is from my house in Hampshire.  This was definitely the case when entries for the inaugural York Marathon opened back in January.  Luckily I remembered soon enough that I would need to book a hotel room.  That was all done way back at the beginning of the year and then, what with changing jobs and a million and one other things to do, I put it to the back of my mind.  When you have five children going away overnight is not a simple matter.  Taking them with you makes any hotel stay rather pricy (especially as all the hotels in York seemed to have hiked up their prices for this weekend), you can't leave a 16 year old in charge of his siblings for that long, so arrangements must be made.  Our arrangements this time saw the two youngest going to stay with my mum (who we met at a service station on the M1 for the handover), the two oldest ones staying with friends, and the middle one coming with Husbando and I.

The journey up on Saturday afternoon was uneventful, and we checked in to a Travelodge near the University campus where the race was to start.  I'm a Premier Inn girl myself, but there was no availability so Travelodge it was.  The beds aren't as comfy in a Travelodge.  After a final carb load at Pizza Express we returned to the room for an early night.  This was a marathon where I'd actually be able to get a lie in as my alarm was set for 7.30am.

We got to the campus at about 8.30am.  It was somewhat confusing walking in as the signage seemed to be set up for the shuttle buses and drivers rather than pedestrians.  We walked through a warren of university buildings, along the way we found a very rare thing - a ladies' toilet with no queue!  Then through a few more warren like bits and we joined the baggage queue - possibly the longest queue I have ever been in and moving so slowly.  I did a rough calculation that there was no way I'd get to the baggage drop before the starting pens closed, luckily I had Husbando and middle child with me, so they could take my bag.  I said goodbye to them and then joined the masses at the start.

I bumped into two fellow Fetchies there - lovely to put faces to names.  I have yet to meet anyone wearing a 'Fetch' shirt who wasn't friendly and happy to chat.  The 9.30am start was a little delayed and took me a few minutes to get across the start line, but it was good to be moving!  The first stretch was down hill.  Quite a steep downhill, which was worrying because I knew we had to come back up that road at the finish.  I tried not to think about it.  We ran into the city centre, through the main shopping centre, passed Betty's Tearooms and York Minster before heading out into the countryside.

The support was amazing.  Not just in the city centre but in all the villages (it isn't every race where you get to high 5 a lady vicar who is standing outside her church in her Sunday best) and at random points on country lanes.  You'd be running along, hoping that you'd reach a point where you could die quietly around the next corner (or dip behind a hedge for a comfort break) only to find a group of people cheering!

This marathon was billed as being a flat marathon.  It is the hilliest 'flat' race around!  The hills were accompanied by unexpectedly dry weather, but it was very windy in places; especially as we ran up a hill past a garden centre called 'Breezy Knees Garden Centre!'  At 20 miles I was starting to wilt.  I had a brief walking break, but it was so hard start running again that I decided not to bother with that again. I did have to slow down to text Husbando so that he knew when to get to a spectator point, much hilarity ensued amongst spectators in the village at 23 miles about me texting while shuffling along.  I said I was calling for a taxi.

It was around this point that I realised I could get a PB if I pushed a bit.  I'd turned up at the start line thinking that this race was about just getting round.  That I'd be happy with 4hrs30mins.  I was only going through with it because I was doing it in Ali's memory and because it was the first.  I was frankly shocked.  I started to push myself a bit more, and was overtaking people all over the place, including people who'd overtaken me when I walked and when I had a 'comfort stop!'

At about 25.4miles I got to 'the hill.'  I was desperate now to get this bloody run over and done with, so I just kept on running,  I don't think my pace dropped at all in that mile, but I was overtaking people left, right and centre, which felt great!  And then we were at the top of the hill and it was about 0.3miles to go.  It was a gentle downhill, but my knees were tired and there was no way I was going to throw myself down the hill at full pace.  I'm glad I didn't as I might have missed seeing Husbando and my son in the crowd.  I did manage a fairly strong finish - concentrating on form as I crossed the line.  One lady near me did one better - crossing the line with a cartwheel!  I'd seen her do several cartwheels as we'd run around the route.  I have no idea how anyone could manage that after 26.2 miles - I can't do one at all!

I'd crossed the line in 4hrs 11mins 40secs.  A new PB!  We filtered through to the finish and collected our goodie bags (medals, tech t-shirt and various other bits and pieces) and I met up with Husbando for the LONG walk back to the car (parked at the Travelodge).

It was a good race with excellent support and beautiful scenery.  If it wasn't so far away (it took 6hrs to drive home) then I'd definitely consider doing it next year.
Posted by MrsBridgewater at 22:16