A weekend of runnning

On Saturday morning we set off to London nice and early so that Husbando could get to  his book fair .  We dropped small children off with various friends as we would be staying over night in the big, bad city and made our way into London along the A3.  This made Wimbledon Common parkrun a logical event for me to attend.  I had done very little research into what the parkrun was like, other than noting the postcode we should aim the sat nav towards, but in my mind I was thinking it would be similar to Bushy Park and Richmond parkruns in terms of the ground underfoot. 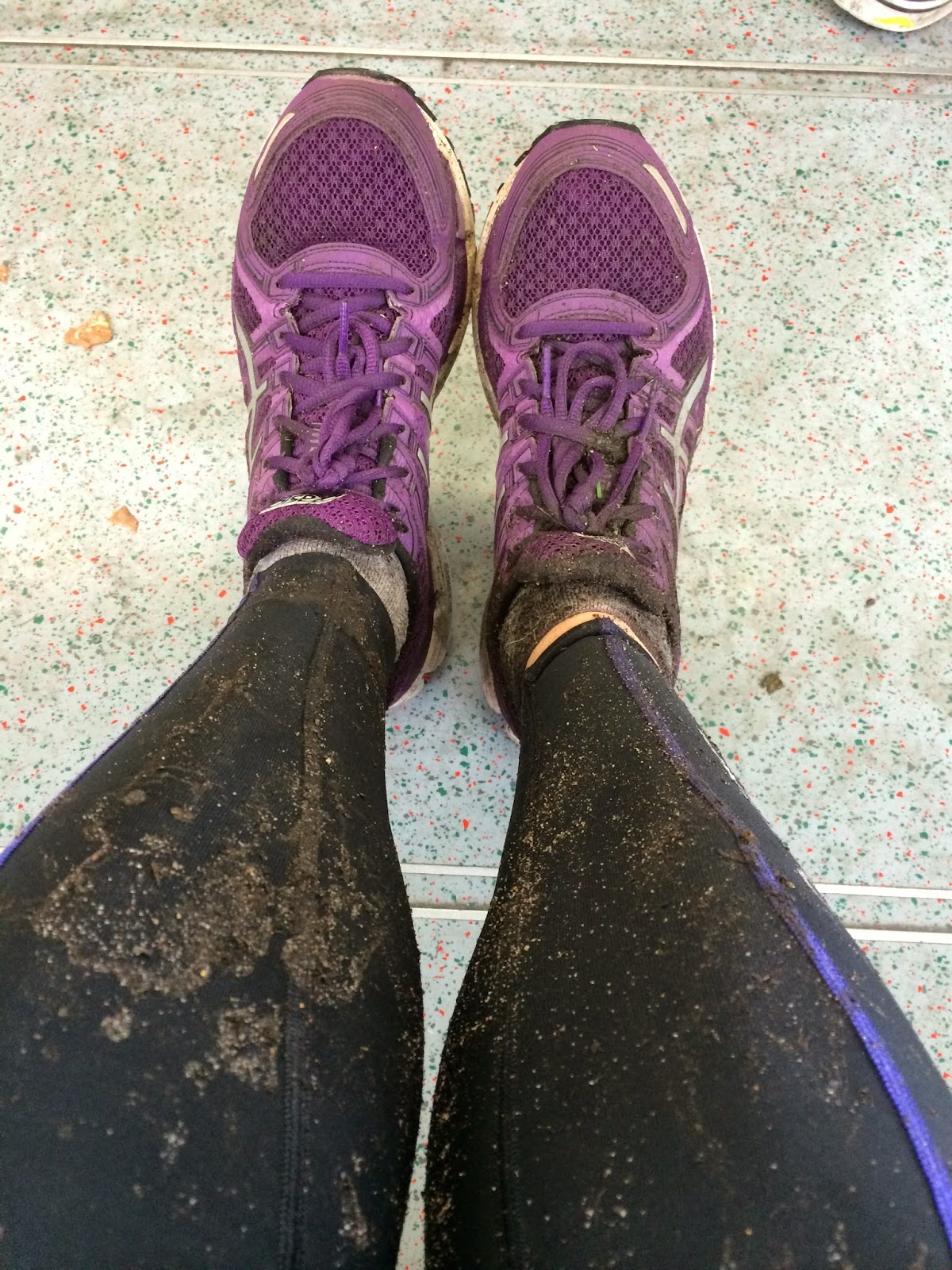 We got there nice and early, and Husbando dropped me off before heading into London.  I found the start and wielded a mallet to help get the poles for the finish funnel into the ground while sheltering under an umbrella.  I chatted with a few regulars and mentioned that I needed directions to the nearest bus stop or station after the run - only to be offered a lift.  The run briefing commenced with much talk of people being put off by the weather and 'jokes' (or so I thought) about snorkels and swimming costumes being necessary.  I picked my way around some sizeable puddles on the way to the start, but thought that it couldn't be too bad.  Anyway, once your feet are wet it is just as easy to go through puddles as it is to go around them.  As is often the case in a new parkrun, I found it hard to know where in the mass of runners I should start, and on Saturday I think I put myself too near the back as I spent the first hundred metres trying to get past people.   I soon settled into a rhythm though, or as much of one as the ground would allow.  We went from a rough path with big puddles to mud with big puddles and tree routes, to puddles and tree routes with a little bit of soggy mud around the edges.  It was great fun if you like that kind of thing.  For the record, I don't! Especially when I had been planning to remain 'parkrun fresh' until we checked into our hotel room later in the afternoon.  I was just thinking about this when I stepped in a puddle that was knee deep!  Sod's law said it had to be my weak right foot - but at least I was icing it instantly! I carried on, making a mental note to avoid that particular puddle on the second lap.  Not a fast time for me - 26.22, but I think to try and go faster in road shoes on that ground would have been suicidal!

The state of my clothing meant that I had to make my way to Sweatshop, armed with Husbando's credit card, to acquire new running tights and socks.  I had clean and dry trainers in my bag so avoided having to buy a new pair of those too.  Given the awful weather (well, it is a Bank Holiday weekend) I didn't think that I'd want to spend the rest of the day in shorts, and was beginning to think  might need capri length tights for Sunday too.

Our hotel was just off Southampton Row.  In fact Husbando proposed to my outside that building (which used to be a Barclays Bank) 21 years ago!  We checked in, tried to decide what we wanted to do that evening, went out for supper, came back to the room and I fell asleep at about 8.30pm.  At around 2am I was woken as two other guests were talking rather loudly as they passed our door.  I was convinced that having had as much sleep as I ever normally get in a night I would not be able to get to sleep again, but the next thing I knew was that Husbando was getting up to go to work!  I had the luxury of not needing to get up for another hour, so went back to sleep until 7.30am.   We had breakfast together and then he headed back to work, and I made my way to Green Park.

The weather was lovely.  I was very glad of this as it meant I could wear my shades.  I was almost in tears as I walked to the start.  It was my baby girl's eighth birthday and  I wasn't there.  I'd never been away from any of them for a birthday, and here I was making my way to a race I couldn't run as well as I wanted to because of poor training on my part and a painful ankle.  I knew that my daughter would be having a whale of a time - she was staying with her best friend, someone she rarely sees since she has moved away from our area and with whom she shares a birthday.  But I still missed her very much.

As I passed the statue of Eros in Piccadilly Circus I saw a 'Fetch' shirt was soon chatting away to the lovely Lully.  We bumped into another Fetchie, philthet, outside the Ritz but we failed to locate the other Fetchies.  I made my way to the UNICEF flag and said hello to the lovely people there.  I've run several races to raise money for them, and they are very supportive of their runners.  On the way to the start I saw some super speedy runners I know,  in their Basingstoke and Mid Hants Athletics Club strip making their way to the first starting pen (Red A, I was in Red D).  The race was started by Mo Farah - who had pulled out of running the race, this will be the only time that I can say that I left him standing on the start line! 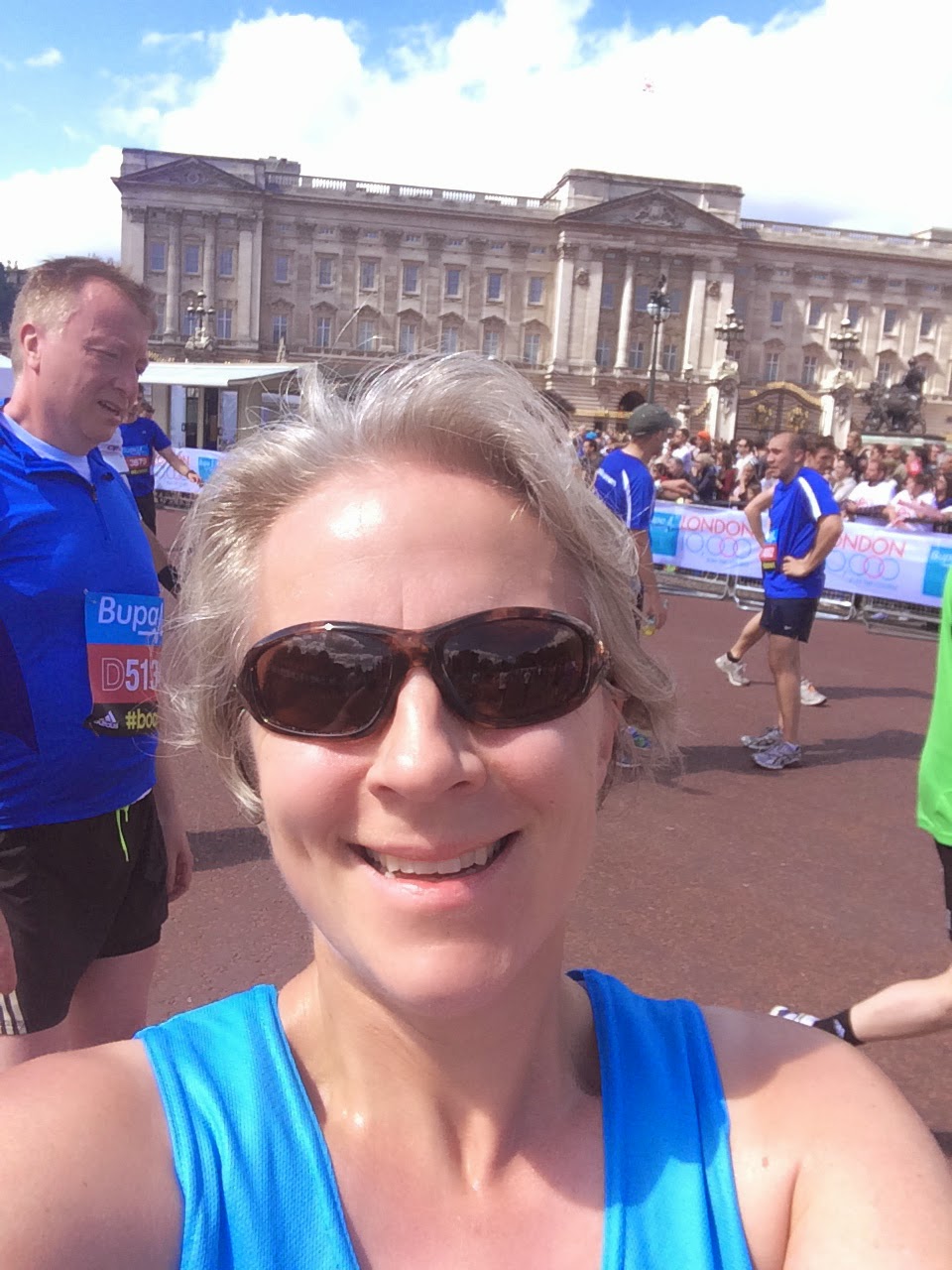 The first quarter mile was very crowded, but I wasn't worried, I wasn't aiming for a specific time. I just wanted to get around without damaging my ankle too much, and to try to enjoy myself.  There was just enough breeze to keep the heat down without feeling as though one was running in a wind tunnel, the crowds along The Embankment were vocal and encouraging.  Just as we approached the underpass the front runners were coming back in the opposite direction.  They had started 8 minutes ahead of us, but there were moving seriously quickly!  I grabbed a dinky bottle of water from the water station and carried on.  I slowed slightly as I scanned the runners passing in the opposite direction hoping to catch a  glimpse of people I knew, and wanting to shout encouragement.  I saw two or three and cheered them on. 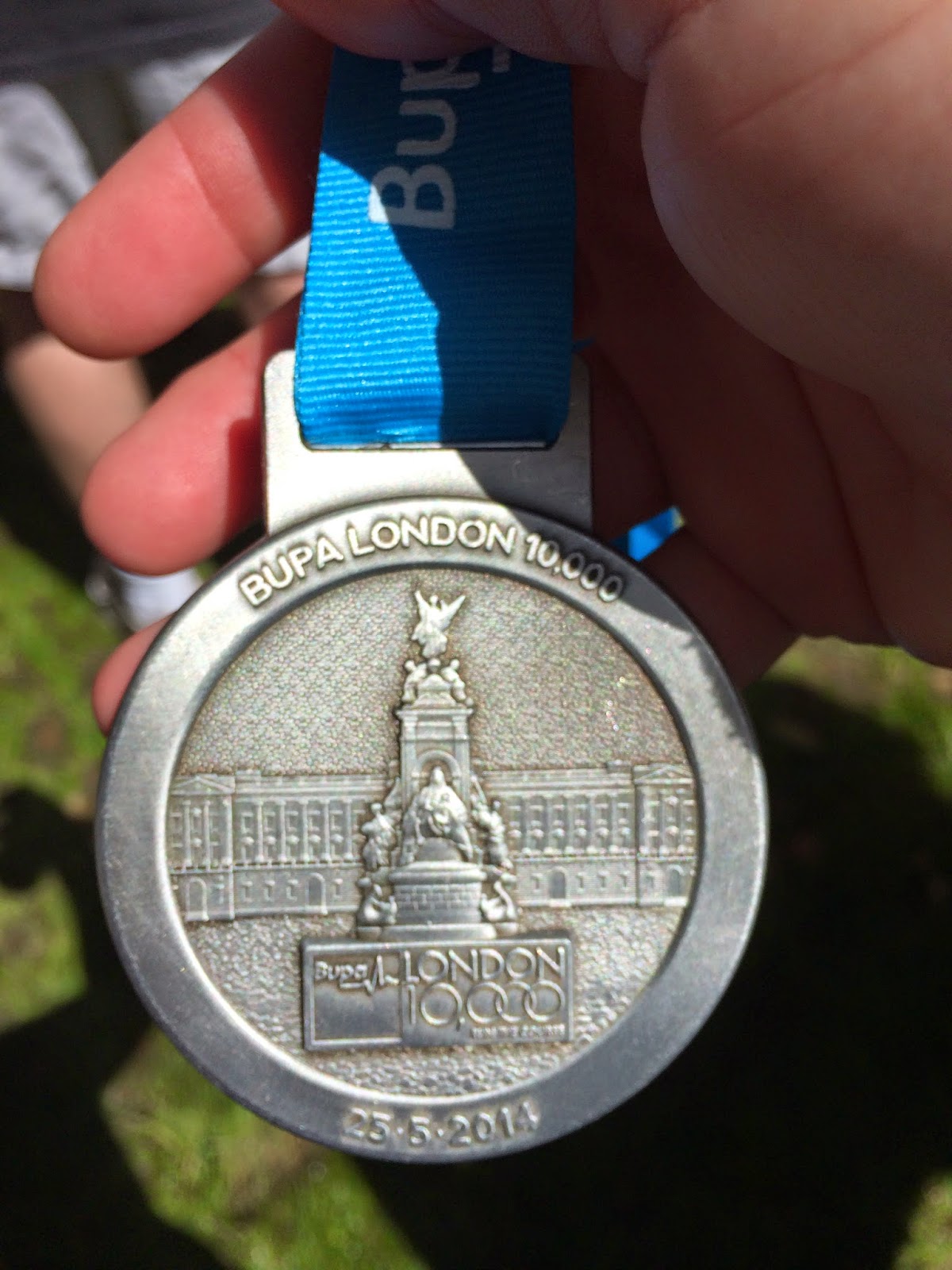 The supporters in The City are always a bit more sparse than along The Embankment and Birdcage Walk, which is actually something of a relief.  A chance to settle into a pace and concentrate on running rather than watching the crowds.  There was a band in Leadenhall Market, and another one near Blackfriars Underpass (I think) that was playing 'Tainted Love' as I ran past.  As I came back onto the Embankment a girl running in front of me was obviously struggling - I ran with her for a while reminding her to breath deeply, not to push too hard, but when she stopped to 'chuck her cookies' I checked that she was OK (ish) found a marshall to look after her, and then we parted company.  2 years ago, on a blisteringly hot day it was me throwing up due to sun stroke, then carrying on to run the rest of the race shivering as I felt so cold!    I wasn't watching my Garmin, and knew that I was way off PB pace, but when I hit the '800m to go' point I thought I would time how ling it took me to run 800m.  I've never timed myself over that distance and was curious.  It took me 3mins 51seconds.  If I'd been able to run a straight line rather than trying to run around people (and traffic signs) it might have been a bit faster.   I crossed the line in front of Buckingham Palace in glorious sunshine, feeling better about running than I have all month.  When I looked at my watch I saw that I'd run a respectable 52.31, and even with the time I'd slowed down and stopped to help the other runner, I'd managed a negative split. 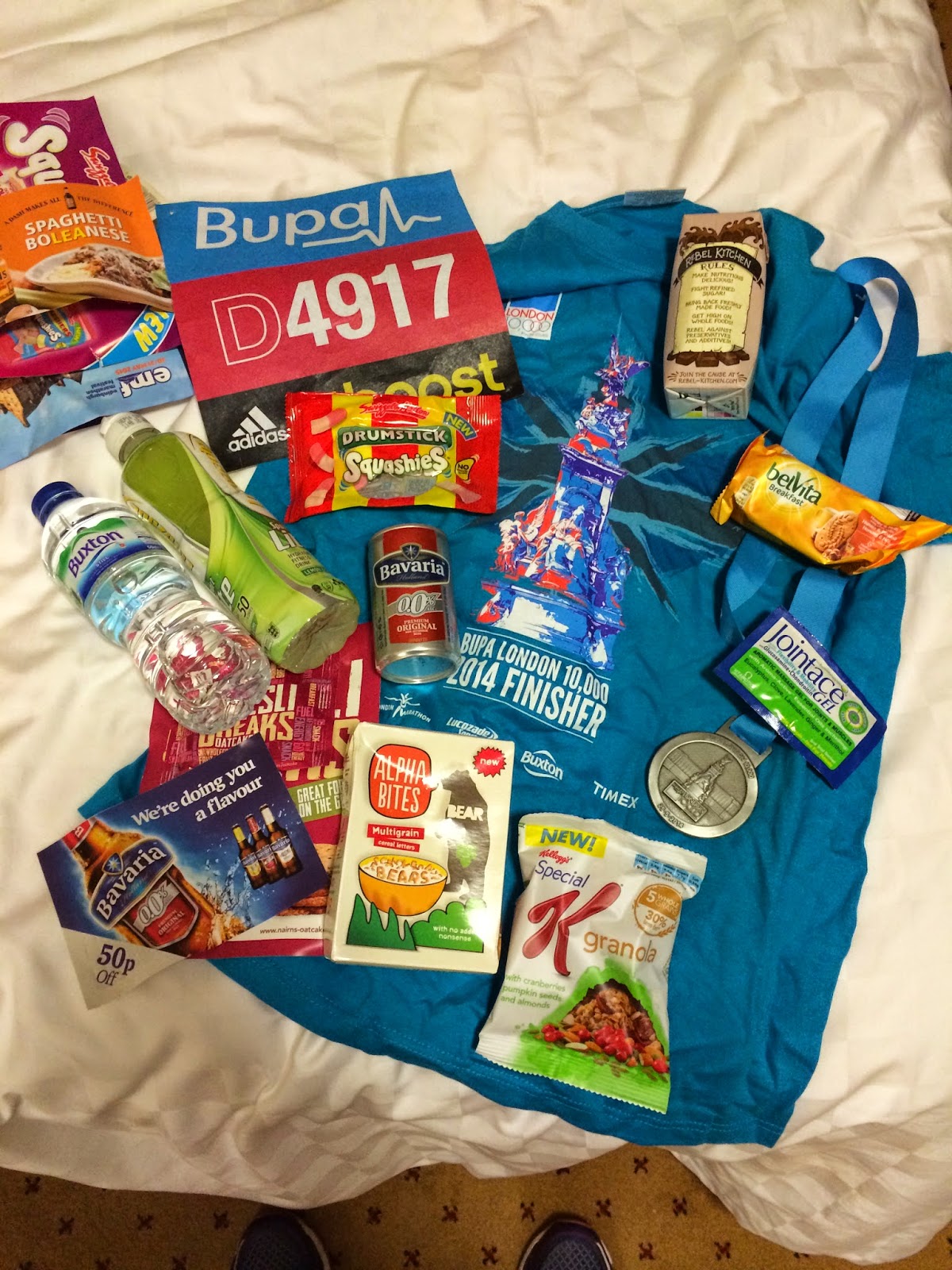 I didn't have as much time as I'd have liked afterwards to hang around and see other runners I knew - but I did say hello to a few people.  I had a hotel room to get back to and the bliss of a shower!  The goody bag was much better than in recent years - a nice tshirt, and enough samples of snacks and drinks to keep my children happy for a while.  This year's medal is lovely too - with the route on the reverse side.