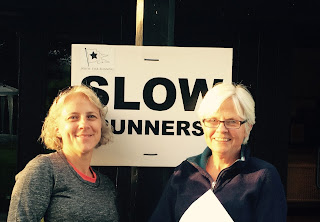 Anyone who has known me for more than five minutes will know that trail running and I do not get on.  I have a knack for finding every rabbit hole and sticking my foot down them with disastrous consequences.  It is still something of a mystery to me that I entered an off road marathon and not just any off road marathon but one that has been described by friends as 'tortuous!'  But I had entered the Giants Head Marathon and so found myself driving down to Dorset on Friday with a friend.  We had decided against camping in the race village because a) I am too old and soft and b) I had spent Friday on a sponsored walk with 800 teenagers and was in desperate need of a shower, but we made our way to the race HQ to pick up numbers and join the pasta and jacket potato party and partake of a couple of Dorset Knobs.   For a while it looked as though I may have escaped the upcoming ordeal as there was no race number for me.  Sadly all I needed to do was show proof that I had paid my entry fee and they made up another number. 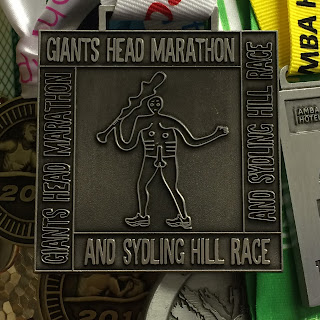 Due to a certain music festival  and my belated decision not to camp, getting a hotel room was neither easy nor cheap.   We ended up in a Travelodge near Yeovil so our race day planning had to factor in the 30 minute drive back to Sydling St Nicholas.  Arriving in the village we parked the car and made our way to the start area where I bumped into a friend I haven't seen for over a year and several other running friends, including the wonderful lady acting as sweeper for the day - she had a witch's broom with her.

After the safely briefing, during which we were reminded that this is a tough race but that it was a running event and that it was possible to walk the event before the cut off time, there was a brief interlude where a marriage proposal was made and accepted - in fancy dress naturally! 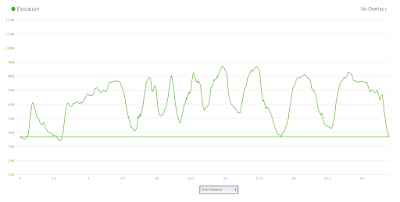 The moment of truth - we were off.  And then, within the first mile, we were walking.  There may have been one or two people who ran up that first hill, but I didn't see them.  I got about halfway up before I realised that my 'run' was barely any faster than the walkers around me and was using far more energy!  The second mile was lovely.  A gentle decent on reasonably even pathways (passed the naked farmer ringing his bell) that lulled me into a false sense of security.  I could put up with the vicious uphills if the payback was runnable downhill sections.  That was not to be.  And if I am totally honest, by 5 miles in I was ready to give up.  Brutal up hills followed by downhill sections so steep, and with conditions underfoot so unstable, that I found it impossible to do much more than mince gingerly down them!  I'm really bad at giving up though, so on I went.  The day was enlivened by the great company and the awesome aid stations.   It is quite possible that I put on weight as the food on offer at each station was so tempting.  Salt and vinegar crisps and watermelon slices are my new favourite race food.  I was very glad of the excellent provisions as I had forgotten to eat my second breakfast prior to the start!

The aid stations were either totally bereft of runners, in which case it would have been churlish to just grab and run rather than chatting with the lovely volunteers, or totally crowded with hungry runners, so a prolonged stop was in order to queue up, have a moan and/or a laugh about the insanity of what we were doing.  Either way, there were a fantastic boost both in terms of nutrition and morale. 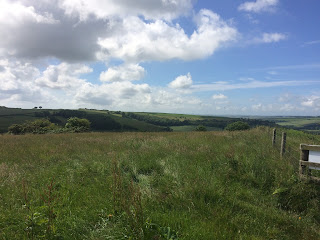 At around 8 miles a sign told up to 'Look right to see a 35 foot phallus' - that's not an offer a girl gets every day!  There were other points where a sign told us to 'Turn around and look at the view' (*) - the views were amazing.  The countryside just goes on and on and on.  But a lot of the time saw me with my head down watching where I was putting my feet!  I was determined not to injure myself as I wanted to be able to dance at a party my friends were having that evening!  Dorset rural is a lot more rural than Hampshire rural and I found the unevenness of the paths and the camber very hard to cope with.  In retrospect road shoes may have been a better choice than trail as they would have cushioned my feet more against jagged stones (of which there were plenty - more later!) Through one section a machete would have been handy - I have a lovely collection of scratches on my arms and nettle rash on my legs from that part, but at least it was flat so that was something!   Although, having said that, it did get to the stage where I'd look forward to an uphill so that I could walk for a while.

(* We also had signs telling us to 'Hurry up FFS,' 'Don't sweat on the flora and fauna,' and 'Run faster you fools!')

At the ante-penultimate aid station I bumped into a lovely friend I made while on a Chemistry course at the University of Southampton.  We ran together to just beyond the penultimate aid station - we actually ran the whole way with out having to walk up a hill or slow down for a killer downhill section!  We can't have been running terribly fast as we were chatting 19 to the dozen but it was probably my favourite section of the race.  We parted company soon after that and I pootled along on my own, chatting with other people as we walked/ran/hobbled and cursed!  The social side of this race made it just about bearable.   I had a lovely chat with an agnostic RE teacher from Taunton, caught up with a member of the 100 marathon club  I'd run with at the National 50/100k championships and Kent Roadrunner amongst other conversations with people who I'd never met before! 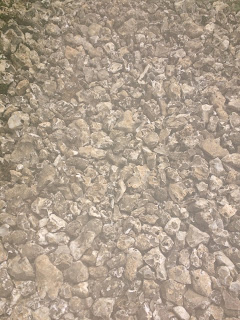 Each of those bits of stone is about 4-5" in diameter - they made up the path for at least a fifth of a mile.  Avoiding them would have involved battling through thistles that came up to my head - so I did what everyone else seemed to be doing - walking gingerly across this treacherous surface.  People complain about cobbles in Paris…. this was a whole different league, tired legs found it hard to walk on them, let alone run.
At 26.02 miles (by my Garmin which I know isn't the most accurate way of measuring distance) came the final aid station.  'How much further?' I asked, while stuffing my face with watermelon.  "3/4 of a mile all downhill," I was told.  I took this with a pinch of salt and although there was only a tiny hill left there was another mile to run. 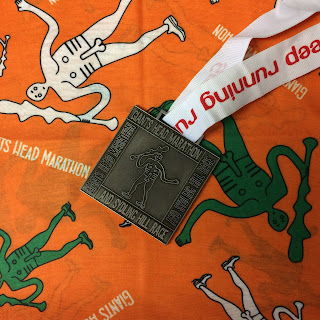 A 'FINISH' arch has never been more welcome.  The finish was on the village green and was the loveliest finish I have ever seen.  Helped by the glorious (sun burn inducing) weather which saw finishers and their families relaxing on the grass, there was a really summer fete atmosphere.  I slight downhill to the finish enabled me, I hope, to appear as though I am actually a runner as I threw myself through the finishing arch.  I did nearly knock over one of the volunteers handing out medals - but he was very gracious about that!  I was given a lovely buff by an adorable little girl.  Buffs are always useful and this one is certainly distinctive! Oh, and a tech t shirt with that fabulous image on the back!  I collapsed onto the grass to wait for my friends to finish. 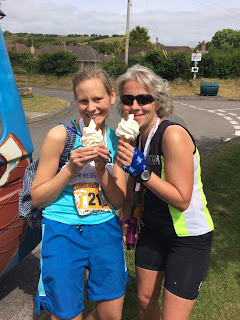 The ice cream van was doing a roaring trade so I joined the queue just after putting my name on the list for a free massage.  99's came in small, medium and large - we went for 'small' having seen the size of the enormous medium.  Even after running a marathon I would have struggled to eat that much ice cream!  It took us so long to eat the small ones that we missed our place in the massage queue and had to let people go in front of us.
After the race it was a mad dash back home as I had a party to go to in the evening.  I hadn't realised quite how far away we were going to be when I said that I'd be back in time.  We had a brief stop on en route as the idea of chips was all consuming and we talked ourselves into a sneaky McDonalds that no one need ever know about and I arrived home with half an hour to spare before leaving for the party.

I made it - just!  If ever there is a time to be grateful for not wearing make up it is in this sort of time pressured situation.  A shower, thrown on a dress, put on high heels and I was good to go.  An evening of food, drink, bumper cars, carousels and THREE HOURS of dancing in high heels followed.  I felt sure that all this dancing would mean that my muscles would be nicely loosened up and pain free this morning.  I was wrong.  Very wrong.  I may be able to walk normally again one day, but I'm not holding my breath!

All in all, an excellent day, but not one I have any desire to repeat.  I am glad to be able to say I completed the marathon but I will not be back again next year.  If you like trails then give it a go but don't expect a fast time!  Last year there were only 9 runners who finished in a faster time than my PB - and I am not a fast runner. 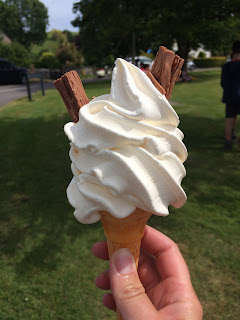