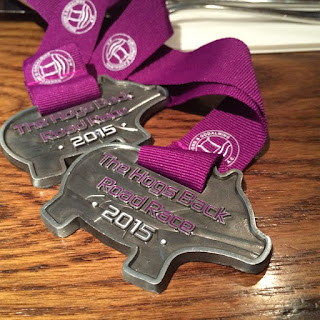 I like a race that is close to home.  It means that I get a bit of a lie in and reduces the stress involved when you don't know exactly where you are headed and are trusting to Google maps for a route and an estimated arrival time.  At 7am this morning I lay in bed thinking that this was the way to do it.  A nice mug of tea, provided by one of the children and no huge rush.  My friend was arriving at 7.45am and we knew that we would be at the venue before 8.15am.  This would give us oodles of time to pick up our numbers, queue for loos and get bored of waiting around for the race to start. 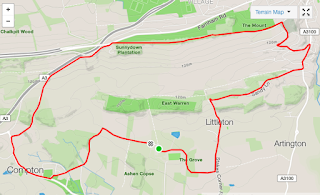 Ha!  The traffic gods had other ideas.  We got to within a mile of the race start by about 8.10am and ground to a halt.  There was a solid line of traffic and it didn't seem to be moving at all.  Yes, Loseley Park does have a long drive, but it also has several car parks.  It got to the point where I worked out we had travelled less than a quarter of a mile in 25 minutes - at this point I suggested that my friend walked to the start - she could queue up for the race numbers and if the worst came to pass at least one of us would be at the start.  I still can't really work out why it took us so long to drive that last short section.  If there had been no one there directing the cars I don't think it could have been slower!  As it was I just  sat in the car getting more and more anxious.  I don't do 'late!'  I rarely do on time.  I am normally early.  Very early.  It is just too stressful not being on time.

I parked just before 9am.  The race was due to start at 9am.  I leapt out of the car… or rather I tried to leap out of the car, but my back had gone into spasm, so I climbed out gingerly and made my way to the registration desk to join the very long queue.  Thankfully the organisers decided to delay the start by 10 minutes, which was just enough time to pick up numbers and run to the loo before heading to the wrong start area.  Call me unimaginative if you will, but a big, inflatable arch with START on it looked pretty much like the start to me.  Luckily one of the race organisers spotted the gathering runners and directed us to the real start.  One that didn't have a great big, inflatable arch with START on it!  We got there just in time to hear the start being announced.  It did not worry me that I was right at the back - it was chip timed so I knew I'd get my actual running time.  Ha!  Wrong - this was one of those races where there is no timing mat at the start, just at the finish.  Ah well, after 3 weeks spent coughing for NATO, including a couple of days where I was so ill that, not only did I not go to work, I also didn't even consider going for a run, I wasn't expecting to run a fabulous race.

The start of this Hog shaped race was a lovely, gentle downhill.  3/4 of a mile into the race we passed the 1km marker.  Even allowing for the notorious inaccuracy of Garmins, it struck me that if every kilometre was this this long it would be a very long 11.7km!  The first hill was short, but steep.   I will admit to walking the last 100m of the hill as I just couldn't get enough breath in to keep me going and was coughing like a 40 a day smoker!  This was followed by an ominous downhill, after all what goes down must go up.  This climb, which took us from Guildford up to the Hog's Back was 2 miles long!  A 2 mile climb in a race that is only just over 7 miles seems a little excessive! This climbing part of the Hog's Back Road also included just over a mile of muddy, puddly track.  There may have been views along the way, but if I wasn't looking at the floor the sky was grey and cloudy!  The marshals were lovely, encouraging and enthusiastic. 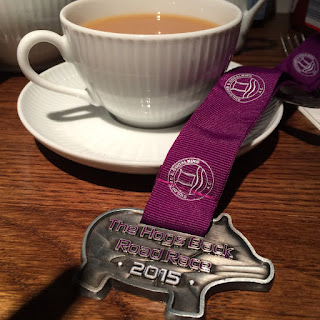 After that it was pretty much downhill all the way until the 3/4 mile - which was uphill again!  Not hugely steep, but obviously a bridge too far for some of the runners.  I overtook lots of people who had overtaken me earlier and at 11k I could see the finish!  It was a straight run on farm track down a slight incline.  I could not wait to finish - so put on a burst of speed.  I know I didn't work hard today. I have felt more exhausted at the end of a training run than I did today, but it is another race finished and a cute medal added to the collection.

The coffee van in the finish area could not cope with the volume of business, (and we are both getting old so found the music a bit loud!) so we retired to Cote for breakfast and fun playing with our medals.

This is a lovely little race, but the lack of organisation let it down.  We were lucky with the weather - although blowy the wind had died down significantly and it stayed dry.  I came home saying 'never again,' but predictably my feelings have softened somewhat.  If if doesn't clash with anything more appealing next year you will no doubt find me at the start line again! 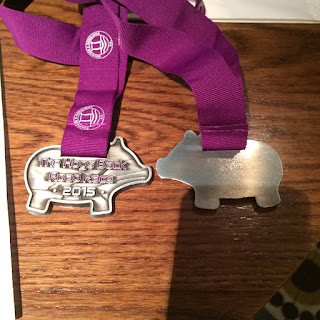