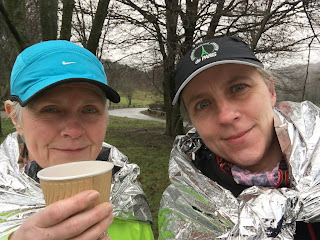 When I ran this route at the end of last year, in the dark and the rain, I distinctly remember ordering some dry weather.  What we got instead was almost constant rain for the whole of January.  And this morning was rainy too - so I looked out my rainy weather running gear, i.e. normal running gear plus a water proof jacket that I know will annoy me within about half a mile of starting running as I will a) overheat and b) the rustling noise will drive me nuts!

I dragged a friend along to share the joy with me.  We arrived in plenty of time, parked, looked at the weather and pondered our sanity.  But we were there and seemingly nothing better to do than run 10 hilly and muddy kilometres before lunch time!  This was the first Chilly Hilly race, and it was organised by a good running friend of mine who had assured me that the Rubix in the race title did not mean we had to complete a Krypton Factor style challenge before we were allowed to cross the finish line, it referred to one of the sponsors of the race. 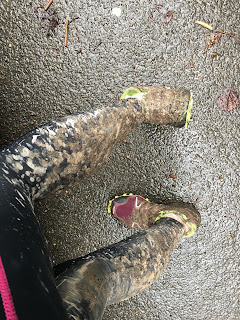 About 250 runners assembled at the start and were soon under starters orders.  In my memory, the start was a gentle downhill, but in actuality it was a slight upwards slope that very quickly became a fairly vertiginous climb.  Running the route in the dark had the benefit of one not being able to see just how much uphill there still was ahead, today the hills seemed to go on and on.  The 'paths' were challenging too.  So much thick, squelch, sucking mud that tried to pull shoes off with every step!  The downhill sections were no easy option either - one misplaced foot could spell disaster, or at the very least a bruised bum and a loss of dignity.  I kept repeating to myself that the first half was tougher than the second! 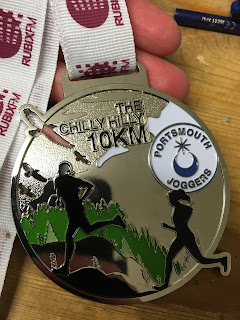 The marshals were friendly and encouraging - it can't have been much fun for them standing in the rain and wind, and there was only one point where I thought I might have gone wrong as I couldn't see anyone ahead of me!  At this point I somehow managed to lose a contact lenses which made depth perception something of a challenge, but I only had two more miles to go!  The camaraderie amongst the runners was great - chatting briefly as we slipped and sploshed around the course and soon we were nearly at the end.  A sharp left turn, down a steep hill and the finish was in sight.... but required a detour onto some rather lovely tarmac and virtually a full circuit of the finish area before we could cross the finish line. I threw my self across the line, just managing to bag a sub one hour time (59:59 -11th female) and hugged the race director before being handed my medal and a raffle ticket.

The chilli, provided by RKdia Catering, was excellent.  Just what was required on a cold wet day!  As was the plentiful tea from All About Tea.  We stood around and chatted with friends while we waited for the raffle to be drawn.  We didn't win, but that really didn't matter.  We'd had a lovely morning, running in a wonderful country park, in awful weather, and getting a fabulous medal too!  I will definitely be signing up again next year!  Well done to everyone involved and thank you!

Now there is just the matter of getting rid of all that mud! 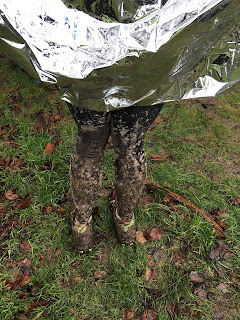 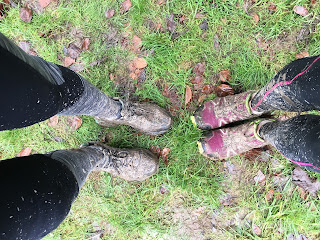 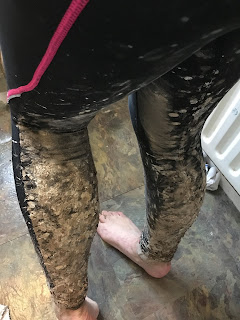