Another day, another race! 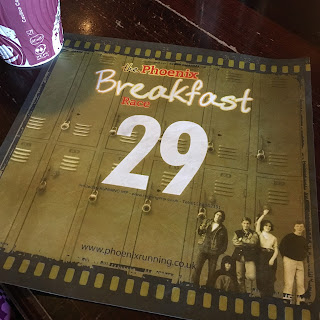 A couple of months ago I called to Husbando from my office 'Name your top 5 1980's films!'  Of course 'The Breakfast Club' was one of those mentioned.  It seems incredible that it was released, in America, 31 years ago today.  To celebrate the lovely people at Phoenix Running planned a themed race - Husbando and I were keen to sign up, but there was a problem.  Number 1 son has been away in Canada for 5 weeks and today was the day he was due back and it seemed churlish to make him negotiate trains and buses to get home.  We had a think, and a plot, and came up with a plan.  The Breakfast Race was a 6 hour timed event consisting of 3.25 mile out and back laps.  In order to 'finish' this race one need only complete one lap.  So the plan was that Husbando would drop me at the start, drive down to Heathrow, pick up our son and then pick me up.  I would run until I saw them at the start/finish area or until I dropped.

The race HQ took up residence inside The Weir Hotel - very sensible given how chilly it was out this morning.  Lots of tea and coffee was drunk, and it was nice to catch up with a running friend I haven't seen for a while.  Lots of people there had run 3 marathons in the last 3 days and were planning to complete another marathon today.  I felt quite wimpy only having run 20 miles the day before!  After a brief pre-race brief (basically - if you can't see the river you are lost, find the river again and then carry on!) we were off.  My legs were not happy about being made to move at more than a staggering pace!  There was a lot of mud on the first part of the course - it got worse every time we passed that section as more feet churned it up.  With the river on my right, the sun shining brightly and the wind behind me it was quite pleasant.  We ran under Walton Bridge - a very attractive bridge and on to the turn around point, coming back we had the wind in our faces - this was not so pleasant, but it was great to see other runners - lots of people I haven't been in touch with since I came off Facebook who I realise I miss quite a bit!  I tried to explain that I wouldn't be there for long due to the 'airport thing!' I regret that I couldn't chat more. 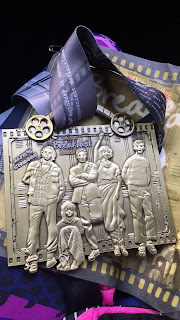 While I was resigned to the fact I might only get one lap done, I really wanted to run at least two, so I tried to run quite fast.  It certainly felt fast, but it wasn't really.  At the end of the first lap there was no sign of Husbando and the prodigal son, so I set off again.  This time the lorry that had virtually blocked the path by The Swan pub had gone, to be replaced by a man feeding loads of swans - they hissed at me (the swans, not the man!) as I passed.  Like dogs, swans seem to know I am nervous around them!  Coming back felt much harder this time.  I'd already seen the sights 3 time, the wind was stronger and my legs were so tired.  I told myself that if I had to do another lap I'd run out and walk back.  The beauty of a 6 hour challenge event is that you can pretty much do what you want within that time limit! I suspect, had the flight been delayed, I'd have stopped for a quick lunch at a pub along the way before carrying on!

I was thrilled to see Husbando and child at the end of my second lap - and not only because it meant I could stop running!   I'd been running for 58 minutes - more than enough after yesterday in my book and was rewarded with a big hug from my boy and a huge medal from the race director (which reels that spin!)

I can't run Phoenix Running events on a regular basis, as they are often on weekdays.  This was my first run with them.  I wish I could have stayed for longer (a marathon is still a marathon however long it takes), and I will certainly be back again.  Well organised, small and friendly events are such a treat to take part in!