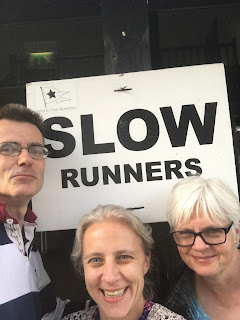 This is the race I said I'd never do again.  It was the first trail marathon I had ever run and I swore it would be my last.  So why was I back in Sidling St Nicholas?  Because I seem to be suffering a case of runner's amnesia!  I travelled down with my running partner in crime from last year and Husbando.    Husbando had been swayed by the promise of a nice B&B and I had neglected to mention that he would be in a village with virtually no mobile phone coverage and no wifi.

Friday night traffic meant we just made it to the village hall in time for our pre-ordered meals cooked by the lovely ladies from the WI .  One of the ladies came over and chatted to us - she remembered us from last year - and told us that she and her husband would be out on the course to support us in the morning.  We collected our numbers, had a look at the finish area and checked into our B&B at The Grey Hound pub, drank some beer, ate some chips and went to bed.   We were all of 2 minutes' walk from the race HQ, so popping out for a WI breakfast and back for a last minute wee before the race the next morning meant that we could avoid the dreaded portaloos! Husbando had entered the Sydling Hill Run rather than the marathon, so he came down with us to the start and took our jumpers back to the room.  After a race brief we all gathered on the race began. 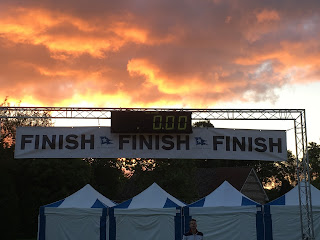 I had no real 'plan' for this race. I was still tired from Endure 24, and my legs had felt heavy and sluggish on every run I had done since then.  But, at Giant's Head it really isn't about the time.  No one is going to use this race to get a good for age place in the London Marathon.  As with last year we were all walking within the first mile - that concrete hill has not got any easier! 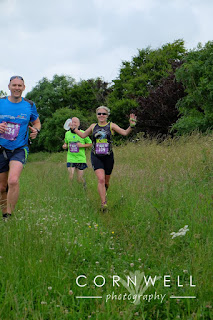 The hills were, as always, hugely challenging.  This year however the ground underfoot seemed even more challenging.  We've had more rain this year which meant that the vegetation was much more rampant.  The long grass sapped energy, nettles and brambles attacked bare legs and the stoney paths were ankle twistingly treacherous.  But it was such fun!  As someone who hates meeting new people, it always amazes me how happily I will chat to total strangers when out running.  Between chatting with other runners, looking down to check that my foot wasn't about to go down a rabbit hole the miles ticked by.  We ran past the Cerne Abbas Giant, and I stopped for a few seconds to chat with a friend who had come along to take photos.  We were 8 miles in and, although it was tough, I was feeling good.  I was running the downhill sections and the (very few) flat sections and using the hills as walk breaks.  It was humid and warm, but there was the odd cool breeze to cool us down.  The aid stations were plentiful, well stocked and the marshals running them were so friendly and encouraging.

Even though I had run the race last year, there were vast sections that I just did not remember having seen before.  There was far more road than I remembered.  It was predominantly downhill which was a blessing, but very hard on the knees in trail shoes.  Some of the off road downhill sections were too steep for me to run down with anything like my normal enthusiasm for a downhill!  Soon my knees were complaining big time, and I began looking forward to hills so that I could walk for a while.  All around me people were adopting the same strategy so I didn't feel bad about it, and by the later stages of the race I would not have been able to run the hills even if I'd wanted to! The views from the tops of the hills were amazing - when I remembered to lift my eyes from the 6' in front of me to have a look.

The World Famous Love Station was a sight for sore eyes - a chance to have a laugh and a joke, some cider or prosecco as well as the normal aid station fare of coke, squash, water, cake, crisps, sausages, jelly babies and water melon.  The Love Station also meant that we were almost, nearly, there.  Except I could not remember how long the race was.  Yes, I know it was a marathon, but this was a White Star Running marathon, and they do like to make sure you get value for money.  Was it 27 miles or 28?  I had no idea.  I looked at my watch and tried to work out whether I could beat my time from last year or not.  I tried to remember how many hills we had to go - couldn't remember that either!  I chatted with another runner who had run a similar time to me last year - he though that we could do it easily, I wasn't so sure. 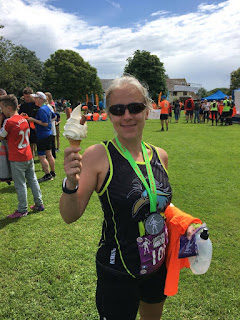 We got an incentive to run faster soon though.  The black, threatening clouds decided to dump their contents on us.  We were running up a slight incline on and exposed ridge.  The wind was blowing and the rain and hail were coming at us sideways.  It hurt when the rain hit my bare skin and rain and hail in my ear was deeply unpleasant!  We got to the last aid station (the one at 26.4 miles!) and they were hanging on to the frame of the gazebo to stop it blowing away!  We played an impromptu game of sardines as we tried to work out how many runners, marshals and food tables we could fit in one small gazebo.  The rain didn't look like it was going to stop and I was getting cold - because I was soaked to the skin and it was very windy - so I decided to plough on.  Just a downhill and an uphill and then another downhill to go.  The rain was very localised and reasonably short lived, other runners had no idea that there had been rain at all! 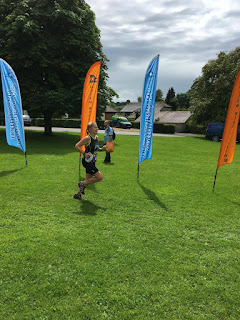 Running into the village and onto the green makes for one of the nicest race finishes ever!  So many people cheering the finishers over the line where we were all presented with our medals, t-shirts and buffs.  I crossed the line in 5hrs and 26 minutes - a 13 minute improvement on last year.  I was thrilled! Husbando was waiting for me - and bought me a small ice cream.  I am glad he didn't go for a medium or large as I think it may well have been bigger than me!  While I'd been running he had done the Sydling Hill Run, marketed as 10-ish km, and had come 11th so he was very pleased with himself.  I think he may even consider doing the marathon next year.   We cheered finishers home for a while before popping back to the pub to grab a shower.  We still managed to get back to the finish area to cheer the very excellent 'sweeper' over the line.  It is a measure of how tough this race is that there was only 1 person who finished in under 4 hours (and I think he only just got under the 4 hour mark).  I remember feeling a bit disappointed with my time last year, but this year I was very happy. 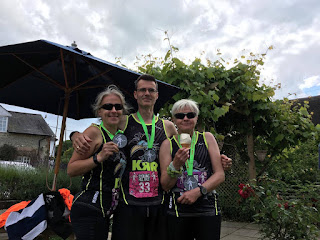 The evening was great fun.  Although drinking three and a half pints of beer after a marathon but before eating anything is probably not the most sensible idea I've ever had!  We ate chilli and rhubarb crumble prepared by the WI, chatted with friends, met new people and drank some more.  Some people did dancing - but I wasn't quite tipsy enough for that!  We had a slight Epipen emergency on the way back to our room.  Not mine, but I recognise an Epipen from about 50 paces and saw a young man at the side of the road with one.  Ambulances take a long time to get to rural Dorset villages - but eventually it got there and I hope he is now OK!

After a good night's sleep we got up and into our running kit (clean set) again for yet another race.  This one was a short one though.  The Sydling Bell Race was organised to raise money for the village church - a really lovely way to say thank you to the people on the village.  It had a 'Le Mans start' in that we were separated from our running shoes so had to dash to find them as soon as the race started.  We then ran up to the top of a hill, did a task (in my case star jumps and push ups) claimed our cow bell medal  and ran back down the hill to the finish.  Reader, I will be honest - I did not run the whole way!  It may only have been 2.5 miles, but there was no way I was running up the steep bits of the hill!  It took me 27 minutes from the start (including finding my shoes and queueing for my task) and I was quite happy with that!

It was an amazing running weekend!  I really do feel as though I've had a little holiday away from the real world.  I can't thank Andy from White Star Running and his band of helpers enough for everything that they did to make it such a success.   I just hope I get to do it all again next year.  And if I do, I must try to remember that the marathon is 27.2 miles long! 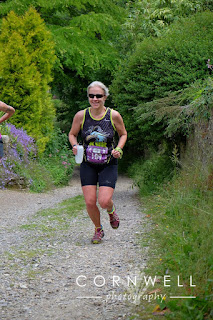 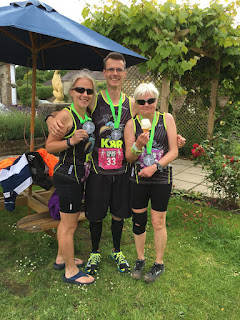