I approached this marathon feeling poorly prepared.  I hadn't run more than about 13 miles since the Giant's Head Marathon, but I knew that I was capable of plodding around within the generous cut off time.  Then I got a cough.  About a week and a half ago I started coughing.  A nasty, dry cough with accompanying tickley throat.  I didn't feel too bad most days, although I had absolutely no desire to run, but the nights were awful.  Some days, however, I have been feeling really grim.  Thursday last week saw me barely able to get out of bed all day.  There was no way I wanted to run at all - let alone run a marathon!

So, why did I turn up for the Salisbury 5,4,3,2,1 marathon?  Was it because it raised money for a good cause?  Or that I might get to hug a fireman?  Did it have something to do with the promise of beautiful scenery?  No, it was purely because a friend was celebrating running her 100th marathon and I wanted to be there with her.

Getting to the start was nice and easy - park in the field opposite the fire station, pick up race number from the fire station - simples!  The race started right next to the car park, so I left my bag in there rather than faffing around with the bag storage.  Not too much walking around involved, which was a good thing because, having done a parkrun the day before to test the legs after a week off running, my quads were trying to tell me that they'd already done a marathon!

Because we were celebrating a 100th marathon there was a theme for the day.  We were all to wear tartan - for a lot of us this meant kilts!  Luckily, cheap, shortish kilts available on Amazon, so it wasn't an expensive option, but it was a rather warm option!  Possibly ok for a midwinter run, but yesterday it was rather warm.  The best thing about my kilt was that it was purple.   That is probably the only good thing about it really!  The flappiness of it annoyed me, as did the chaffiness as it rubbed away around my waist (it was a bit too big for me), but at least it was purple! 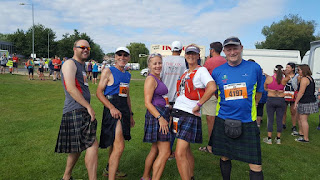 As we gathered for the start we posed for silly photos, there are some photos somewhere of us a load of kilt wearing maniacs in front of a fire engine... and yes I did get to hug a fire man!  The ultra race (50k) set off at 9.30am and we left at 10am.  This late start meant that I didn't have to get up at sparrow fart to get there, but is did make me giggle a bit.  We had all received comprehensive pre-race information packs, which included information about precautions to take when running in hot weather.  One of the sensible, and obvious pieces of advice was to run early in the day... 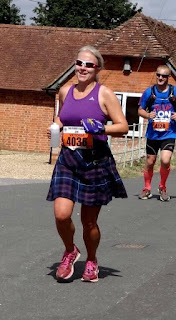 It was already warm by 10am.  But hey ho, in for a penny, in for 26.2(ish - more of that later) miles!  I decided not to run with a group.  I had low expectations, speedwise, for this race but I didn't want to feel pressurised to run at someone else's pace.  My only aim was to get round in 'about 6hrs.'  This would be a massive personal worst for me - but it was designed to make me take it easy.  I also like the serendipity of falling into and out of conversations with all sorts of people along the way.

My plan was to walk the hills and run the flats and downhills.  And there were quite a lot of hills, so I did quite a lot of walking.  My chest hurt, my legs hurt, the kilt was annoying me, my key was making a clicking noise in my back pocket.  I was properly grumpy for a lot of the time!  As I ran along I kept thinking 'on my next walk break I will sort that key out and take this kilt off.'  However, as they didn't annoy me when walking I forgot until I started running again - oops!

The water stations were fairly frequent and the marshals were friendly.  I saw lots of familiar faces on my way around and I was not adverse to stopping for a chat with people I recognised at the side of the route.  Anything that stopped me having to run, I also had a chat with all the volunteers at the water stations too.  There were some long old hills, which was great - more opportunities for walking.  There was some stunning scenery, some challenging sections that were tricky underfoot and a bit more road than I had anticipated in a trail marathon.  We ran past the very beautiful Longford Castle and through the surrounding estate - a really stunning part of the route, the views from Combe Bissett Down were also breathtaking - the photos on that link do not do it justice.

Despite the beautiful surroundings and the lovely marshals I was definitely not having a good time.  The smiles were definitely only for the camera!  I began to think that this would be my first ever DNF.  I mean, what was the point in this running lark?  I'd just keep going for another mile and see how it went.  As I crossed one of the stiles, while I had one leg on the stile and one in the air, an impatient runner barged across the stile.  How lovely for him to have such long legs that he can bound across the stile, but such a shame that he had no manners at all.  And then I was at 13 miles (according to the markers and 13.5 miles according to my Garmin) so that was half way as near as dammit, and it may have taken me just over two and a half hours but I was now sure that I would at least finish....  even though I knew I would be even slower in the second half.  My legs hurt, my chest hurt, my voice was not working and it was only going to get harder.   Lots of people around me seemed to be having a tough time too.  Lots and lots of runners  were walking - that made me feel slightly better about shuffling along.

At some point the mile markers disappeared.  I think it was at around 21 miles.  Several people had said that the marathon was 'slightly long' but that the 50k was spot on.  I thought, from my earlier Garmin to mile marker comparisons that we were looking at about 26.8miles.  We ran down from the racecourse and back into Salisbury, along the river bank and up to the Cathedral.  The cathedral grounds were very busy with lots of tourists (and maybe even some worshippers - it being Sunday!) so there was a fair bit of weaving around and avoiding small children and dogs and pushchairs and then I was out into Salisbury city centre... with absolutely no idea which direction I was supposed to be going it.  There were loads of people - but they were all 'civilians' - I couldn't see a high viz jacket or a sign anywhere, and I couldn't see any other runners.  I was convinced I was lost and stood looking around for what seemed like an eternity.  Suddenly someone came up to me and pointed me in the right direction - he'd done the half earlier in the day.    At this point my watch said I was over the 26 mile point, but I had no idea how far I still had to go.  Was it half a mile?  In which case I should maybe muster a bit of a shuffle (to call it running would be optimistic).  I was grumpier than grumpy by now.  I just wanted this to be OVER!

I crossed a road and the marshall said that there was 200m left to run.  I didn't believe her (sorry!) but as I turned to the left and there, at last was the finish line!   My watch said that it had taken me 5hrs36mins to run 27.2 miles, so not quite a personal worst for a marathon.

There is a reason that they tell you not to run when you are ill.  It makes everything so much harder.  Today I am paying the price, my legs hurt, I'm coughing up a storm and I am exhausted, but marathon number 15 is done!

I wouldn't have missed my friend's 100th marathon for the world though.  So much laughter, lots of cake, beer and champagne.  There was also pizza later on and a chance for a good chinwag and to meet new people before hobbling home.  Thank you so much for asking me to come along - and good luck for the next 100....