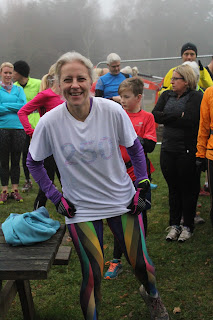 I heard about parkrun over 6 years ago, but didn't consider going along for at least 6 months because, although I'd been running for a couple of years, I did not consider myself to be 'a runner!'  I didn't want to be the slow one, plodding around at the back with everyone else tapping their feet as they waited for me to finish.  I can't remember what happened to make me change my mind but, on 21st May 2011, I took the plunge and found myself, barcode in hand, in War Memorial Park with a load of strangers.  This was A BIG STEP for me.  I am quite uncomfortable in situations that are new and that involve lots of people I don't know.  I need not have worried.  Everyone was very friendly and I wasn't last.  It was the first time I had ever run a timed 5k and I surprised myself by being able to finish in just under 25 minutes.  I ran, got my barcode scanned and drove home.

But I came back the next week and did it again.  By July, I was turning up almost every Saturday and had probably turned into something of a parkrun bore, telling everyone I could about this amazing parkrun thing.  I volunteered a few times, which was good as it meant that I got to know some of the other regulars - this meant I had enough confidence to brave going along for the post run coffee.  This involved meeting more and more parkrunners, and hearing about (and subsequently entering) lots of races I would not have even have heard of without parkrun. 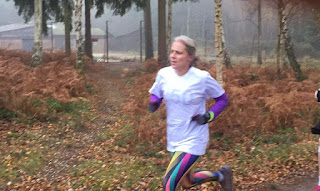 It is quite amazing how quickly parkrun became such a integral part of my life, and how many of my friends seem to have decided that it is easier to go to parkrun than to listen to me extol its virtues!  I've visited 51 different parkruns, mainly because they were near where I happened to be on a Saturday morning, and made loads of new friends.  Obviously I've missed a few Saturdays when I've been involved in Saturday races, have had to work on Saturday or been injured, and several runs have been given up in exchange for volunteering at parkrun, but in the main, if it was 9am on a Saturday, I was to be found in a park getting ready for a 5k!

Which brings me to this morning.  Although my 'home run' is Basingstoke, Husbando struggles to get to that venue as he has to work on Saturday. Alice Holt he can do and make it to work afterwards.  Alice Holt also has a lovely large gazebo for setting out cakes, a cafe and nice loos, and I was involved (a little bit!) in setting it up four years ago - so I decided that it would be the venue for my 250th parkrun.  I set up an 'event' on Facebook and sent out some invitations, thinking that a few people might be interested in coming along, especially if I bribed them with cake and fizz!  A friend I'd met via parkrun sent me a message saying that he was coming along and coincidently running his 100th parkrun - so double the celebration!  I stayed up late baking and icing cakes and arrived at Alice Holt fairly early.  As I laid out the cakes I saw a constant stream of familiar faces emerging from the mist - people I hadn't seen for ages and ages and who had travelled for miles and miles just to run 5k with me!  Some people hadn't even come to run - they'd just got out of bed early on a very chilly Saturday morning to come and watch the rest of us run!

Having run 249 parkruns without ever having forgotten a barcode, my 250th nearly had to be delayed - I realised that my barcodes were not in my pocket (I keep all 7 on a treasury tag and they have vanished).  Panic stations ensued!  Could I get home and back and still run?  Could I ask Husbando to give up his run and go home and print out spares?  Would he know how to do that without a tutorial?  Then I remembered that I am a parkrunner, and a parkrunner always has spare barcodes somewhere in every car.  Crisis averted with a mad dash to the car and a rummage round to find a tatty ziplock bag which had the required barcodes.

After setting a new Alice Holt PB last week, and with a 6 hour challenge tomorrow, I knew that I wasn't going to set any records today.  And I wanted to enjoy my run, not end up gasping for every drop of oxygen I could find at the end of the run.  Husbando and I had a nice, chatty run.  It felt so much easier than last week, but I was 44 seconds slower.

It was wonderful to chat to so many people afterwards, I am really touched that so many people came to help me celebrate.  I really do love my parkrun family.  Huge thanks to PSH, whose love child parkrun is, to all the event directors, run directors and volunteers who make the many, many parkruns across the globe happen every week.  I'll see you in a park (somewhere) next parkrun day! 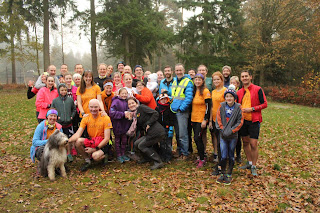 P.S.  Is it wrong that I am wondering if the second 250 parkruns will take more or less time to achieve than the first?
Posted by MrsBridgewater at 15:48