Of knock knees and beautiful bling 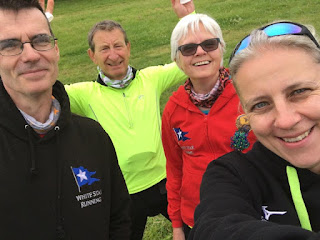 It was the first Sunday of the half term break.  This was a break that I had been looking forward to for what seemed like a millennium.  I was so tired  towards the end of  the half term that the temptation to fall asleep while standing up in front of a class was hard to resist.  So why was the alarm ringing at 4.30am on a Sunday?  Because I had decided that I'd rather sleep in my own bed than travel down and stay in a B&B.  It didn't seem like such a good idea as Husbando and I blearily got ourselves organised and into the car and, picking up friends on the way, set off towards Dorchester.

We'd all pretty much decided that we needed a McDonalds breakfast an a coffee for breakfast, and we knew exactly where we would stop.  The disappointment we felt when the McDs at Ferndown was closed for renovations was huge.  How could this be?  Did they not know we were depending on them? How would we manage now? We were starving!  Husbando had taken the car to be valeted the day before, so there wasn't even the chance of finding a lost chocolate bar or packet of crushed mini cheddars under one of the seats.  There was nothing for it but to head on into the wilds of Dorset and hope that there would be food available somewhere!

Our detour to the (closed) McD's had cost us a few minutes. Minutes that meant that we arrived on the outskirts of Dorchester just after 7am.... which was the time that all the road closures kicked in and we were told that the signs had 'been up all week' and that 'closed means closed.'  After a couple of false starts, a look at the map and the race instructions, we decided that the only way to get to the race start was to just drive through the road closure signs - much to the annoyance of the people setting it up!  Luckily we had plenty of time - I do hate cutting things fine!

We arrived at the 'Athlete's Village', parked the car, faffed about a bit, grabbed a coffee and, thank goodness, a bacon roll!  As is normal at a White Star Running event, there were lots of familiar faces to greet and chat to, we picked up out yellow ribbons to wear as a mark of respect to all those affected by the events in Manchester last week  and pretty soon it was time for the two of us running the marathon to say goodbye to our other halves (aka, throw our hoodies at them for them to stow in the car) and head to the start line.

Standing near the back of the 700+ strong field of runners, I have to admit I didn't hear a word of Andy's run briefing, but the Town Crier, in full costume, stood on a cherry picker and sent us off with a rousing speech.  My plan was... well I really don't know what it was.  Suck it an see?  The weather was hot and humid, but overcast at the start and for the first 5 or 6 miles I was having a great time.  It was very pretty, lovely villages (mostly with a name that included 'piddle' or 'puddle' but 'Tincleton' was my favourite name), gentle undulations and great scenery! I began to think I would be on for a reasonable time.  But then my knee went wonky.  It had been a bit 'owy' on the previous day, but I'd put that down to pre-marathon jitters.  Suddenly my right knee felt as though it wanted to bend the wrong way.   Should I stop?  Probably.  Did I stop?  Well, what do you think? 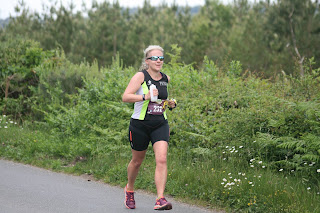 I decided to run until I got to 13 miles and then run/walk the rest of the way.  I saw a few familiar faces as I plodded around.  I played leapfrog with several runners, especially when I was running 9mins walking then walking a minute, but soon people weren't catching me up anymore even when I was walking - even though I stopped to chat at every aid station and the love station.  Lord Badger got upset because I 'molested' him (his words for a big sweaty hug) and didn't hang around for a badge!  To be honest it almost hurt my knee more to walk than to run, but my hamstring was tightening up (to support my knee) when I was running! In fact, the whole right side of my body was tensing up so much that even my hand was aching! 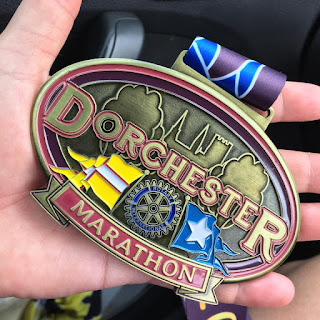 At 23 miles there came a totally unnecessary and rather rude hill.  It was about a mile long.  Not overly steep, and really quite runnable in normal conditions.   But I felt as though the right hand side of my body was ever so slightly broken and did I mention it was hot?  Very hot, sunny and unpleasantly humid.  At this point I fell into step with some other runners who had decided not to run up the hill - so it seemed rude to run when they were walking.   The 24 mile marker (yes, mile marker at a WSR event!) was a very welcome site.  I knew that I was suffering but that 'no more than 4 more miles' was more than achievable!  I refused to be lulled into a false sense of security by believing that this would be a traditional marathon distance, but low and behold, as I ran downhill and past the 26 mile marker I could see (and hear!) the finish. I overtook a few people who had been just ahead of me for most of the race, and then had to really push it to the finish to make sure they didn't come back past me, the finish was great - the last 100m was lined with supporters.  Someone called out my name (or rather a variant of it that was used on the parkrun show - I didn't see who it was, but thank you!  And Husbando was sitting on a wall by the gate to the finish area to see me home.  I picked up the pace and lengthened my stride (my last .3 of a mile was sub 8min/mile pace) and threw my aching body over the finish line.  The WSR team gave me my rather super medal and lovely t-shirt and I hobbled back to meet my friends.  My time was 'Ok - considering.'  Husbando had run the half marathon and had an awful race.  He'd hurt his knee 4 weeks earlier, and decided to switch from the full to the half for his reason.  He'd run the first 6.5 miles in 44 minutes, and then taken 1hr45 mins to complete the rest - his knee just locked up totally.  To counter this our little group also had a massive PB - a time of 3hrs51mins which was also his first sub 4hr marathon.
All in all it was a excellent race, well organises, great race village, awesome aid station and wonderful route.  Can we do it all again next year please?