While I was in Africa, Husbando and I discussed going away for a few days when I got back.  Much debate followed.  He mentioned Tromso, I fancied Snowdonia then Husbando countered with Amsterdam.  Amsterdam came with the added appeal of a book market on Fridays so that he could possibly do some business.  So flights and a hotel were booked, a guide book was bought (and swiftly misplaced) and we sat back and waited.

We'd booked to stay for 2 nights, but we aimed to make the most of our time by arriving early and leaving late.  This meant a 2.30am alarm call so that we could make a 6am flight and arrived at Schiphol at about 8am.  After checking in at the Amsterdam Hilton (that's right the one where John and Yoko stayed in bed for a week - you can stay in their room and even book it for wedding ceremonies) and grabbing a quick breakfast in the Executive Lounge we hit the internet and booked our first trip - because a tour round a brewery is what everyone needs at 9.30am on a Wednesday morning. 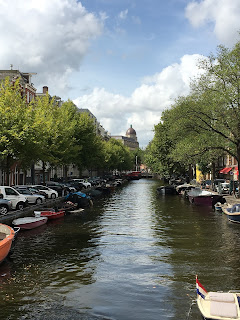 Now I have to admit that I somehow always thought that Heineken was a German beer.  I have no idea why I thought that, but it may have had something to do with their advertising campaigns in the 1980s.  I was happy to be educated and to get to drink beer on the stunning roof terrace overlooking Amsterdam.  One of the things we could just about spy, and had passed on our way to the brewery, was a major engineering project - in need of more city centre parking they have decided to drain part of one of the canals and build a 2 story carpark underneath it before replacing the water.

The first afternoon saw us traipsing around the Rijksmuseum - Husbando loved it, I thought it was OK, but then I am the sort of philistine who wanders around the National Portrait Gallery trying to work out which modern day celebrities the portraits most closely resemble.  In the evening we split up.  Husbando took himself off to the casino and I went to the Anne Frank House.  I am probably the only person on the planet who hasn't read the diary, and there were bits of her story of which I was unaware.  I had no idea that her father had survived, and I was totally poleaxed by the site of the pencil marks on the wall indicating how the girls had grown.  We have those same marks on the door to our kitchen.

Thursday saw two mad English people pounding the streets in the 1928 Olympic Village and around the Olympic stadium.  We discovered that the Amsterdam Marathon starts and finishes in the Olympic stadium - so that one might be on the cards for next year.  After that, it was on to the Van Gogh museum.  We'd pre-booked our tickets so avoiding a HUGE queue.  I am always blown away by his paintings and this was no exception, but we also learnt so much more about his life.  I can't recommend this place highly enough.

After all this culture we needed more alcohol.  The House of Bols had been recommended - so off we went.  Now I thought that Bols only made that disgusting Advocat that used to appear every Christmas - but they make a whole range of vividly coloured liqueurs as well as genever and gin which makes for some interesting cocktails!

Friday was spent meeting friends who have moved to Amsterdam and mooching around the Spui Book Market.  I will admit that I found this less than exciting (the book bit not the meeting friends bit - who doesn't like beers in the sunshine at 10am in the morning?)  and took myself off the the Begijnhof - these houses around a tranquil garden were built as a sactuary for the Begijntjes, a Catholic sisterhood who lived like nuns, although they took no monastic vows.  I sat and read my book and wrote some postcards.

The rest of our time was spent wandering around, popping in and out of shops and cafes and just enjoying the beautiful architecture.  Even the modern building seem to have a really strong design element and the glimpses we saw into people's homes seemed to show a love of books and art.  Amsterdam feels like the real world only a little bit nicer!  There is plenty that we didn't get to do, but that's find - it means we'll have to go back!