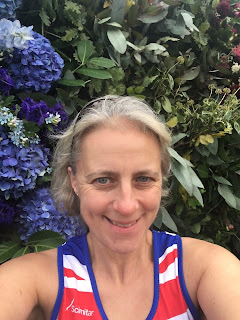 This race defies my law of threes.  In general I have found that revisiting any race for a third time greatly reduces my enjoyment of the event.  This has happened at several races - I won't name them here as it isn't the race organisers' fault it is just one of those things.  But the Royal Parks Half defies this rule.  I've run it every year since it was my first half marathon back in 2011 and have loved it every year.

This year I was approaching it with trepidation.  I have something wrong with my leg.  I'm not sure what.  It just fails to work properly sometimes, normally after I have been sitting down for a while.  The other evening I stood up and could not walk across the sitting room - I think it may be a trapped nerve and I will need to get it sorted at some point soon.  This, added to my general lack of fitness, meant that I didn't hold out much hope for this race.  But deferrals aren't possible and the ballot is quite hard to get into so I thought that I might as well pitch up.  And it was the 10th anniversary of this race. 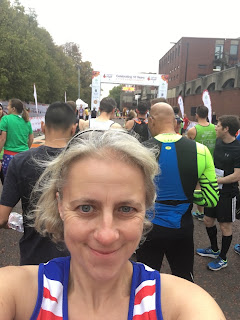 So, up early to get a lift into London with Husbando.  We left the house at 4.45am, which left plenty of time for a second breakfast when we got into London, plenty of time for pre race faffing around before heading to Hyde Park.  This race has grown a lot since I first ran it and there were long queues for loos and the baggage drop, but I had loads of time.  I had enough time to buy a packet of Shot Blocks to replace the ones I'd left on the kitchen table.  I was looking around for familiar faces.  I didn't see anyone I knew - which is quite unusual!  I didn't even spot the one person I knew who was running the race.

I made my way to my starting pen with a target of 2hrs in my mind.  Scarily near the front.  Just the super fast runners in the tiny pen in front of us.  This may not have been the wisest idea in terms of race strategy - but there wasn't much I could really do about that!  We set off a couple of minutes after 9am - just as the Sun decided to poke out from the clouds.

About 30 seconds later I needed the loo!  I tried to convince myself that it was psychological - because I never need to pee during races - and ran past the first set of loos.  By the time I got to Buckingham Palace I knew that I really did need a wee, thankfully there were loos at the Horseguards end of Birdcage walk!  It was a double blessing, because that minute meant I was with slightly slower runners and was not quite so tempted to try to keep pace with them. 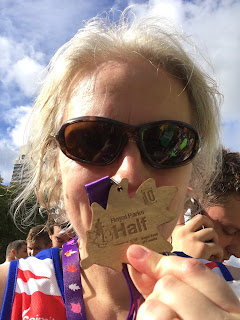 The route took us down Whitehall, as we drew level with Downing Street there was a sign saying 'U-turn ahead.'  It is a measure of the youth of all those around me that I had to explain the irony of this! It was a very much younger crowd than I encounter at most races!   And it was a crowd!  It was always busy but most of the runners were good natured and there was very little jostling.   After a quick jog around the Alwych, Trafalgar Square and up Pall Mall we were back in Hyde Park.  The wall of noise here was phenomenal!  This is always a well supported section of the race, but it was even louder than normal, and the support in the park was much better than in previous years where there has been a dead zone around the 11 mile point.  The support more than mitigated the aggravation caused by people trying to cross the path of the runners with toddlers, buggies, dogs etc. 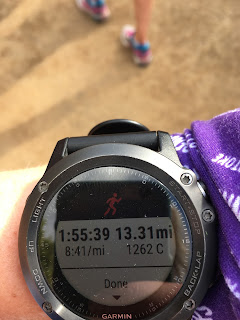 If I wanted to hit my 2hr target I had to run 9 minute miles.  I was doing that. In fact I was doing a bit better than that, but my goodness it was really hard work.  I haven't run many races entirely on 'road' for a long time, and my undertrained legs really felt the impact.  I think I worked harder for this race than I have in any race in a very long time.  The course is pretty flat, but there were a few welcome downhills, which means there must have been corresponding uphills but I didn't notice those!  Unusually for me I ran pretty consistently - and was overtaking people in the second half who had over taken me in the early stages.  Nevertheless,  I was really glad to turn the final corner and run past the Albert Memorial towards the finish line.

My finish time is over 10 minutes slower than my PB, but I don't think my legs could have taken me any faster today.  My Garmin tells me that my recovery time is 67hours!  I started this recovery after I had collected my bag from the bag tent... I was waiting for a friend who had started in a later pen, so I took advantage of the sunny weather, plonked my back pack on the ground to use as a pillow and had a snooze in the sunshine before we met up for a well earned lunch and a glass of wine.   The lovely waiter gave us free coffees!

I've already registered my interest for next year's race.... 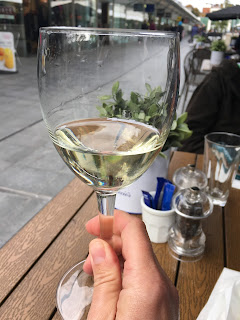