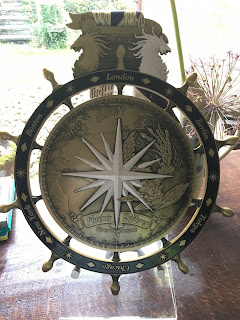 This weekend last year saw me running around Wasing Park at Endure24.  I wasn't having a great time.  My friend wasn't having a great time, having to stop running after 20 miles.  Somehow we managed to talk each other into entering again this year... and then when injury and illness got in the way and we both decided to be sensible and grown up and defer, which I was absolutely fine with.  Honestly.  I was looking forward to a weekend of not running, I wasn't going to feel at all jealous when I saw the updates on Facebook, Twitter and Instagram.  Not at all.

And then a few things happened.  I completed my 12 marathons in 12 months challenge some time ago, but hadn't run at any Phoenix Running events for a while so hadn't been able to collect my certificate and medal, and ten extra places were announced in the Phoenix Explorer marathon.  Just ten places, and demand would be huge because the medal was going to be very special - so a ballot was organised - and I got a place!  At least I wouldn't be sitting around doing nothing while all my friends were running. 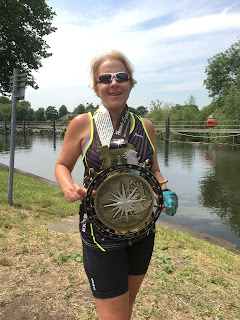 And what a day it was!  We had World Record Holding twins (the most marathons run by twins) and a couple of  milestone marathons announced before we started our race, but other than that it was the shortest race briefing ever!  I did almost miss the briefing though -the last time I'd run a Phoenix event at Walton On Thames registration and the briefing had been down on the tow path.  I was happily chatting with a couple of people, wondering where every one was, down by the river having not read my race instructions at all!

The marathon was 4 out and backs, each of just over 6 miles, from Walton towards Hampton Court.  I decided, fearful of the wheels coming off the bus again as they had at Dorchester, that I would just aim to get around without feeling the need to cry at any point.  I chatted with various people at the start but have to admit that I was feeling a bit 'peopled out!'  I was more than happy to plod along (run 9 minutes, walk 1 for as long as I could) with my own thoughts for company.  I dropped in and out of conversations with other runners and there were faces I looked forward to seeing as they came running towards me on the out and backs and was more than happy to stop for a chat at the aid stations at either end of the route but for the most part I was happy on my own. 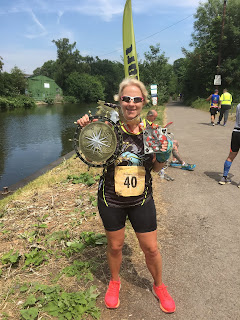 I watched the rowers going up and down the river, saw ducklings with their parents, avoided getting run over by bikes and tripping up young children.  I even managed to put on a bit of a sprint in order to avoid a dog that thought my legs looked tasty.  The conditions for the first half of the marathon were ideal - nice and cool with a light breeze, but it soon got rather warm and sunny.  I was enjoying the run, but was aware that my pace had slipped.  I didn't really care - because I was still going to finish faster than I had at Dorchester!

Despite the fact that I was enjoying the run, I was very glad to get to the finish - the tow path is a mixture of hard packed gravel and tarmac, in the dry conditions it felt as hard as a road marathon and my knees were feeling a bit achey towards the end, I managed to pick up the pace at the very end to ensure I finished under 4hrs45mins.  Then it was bling time! And when I say 'bling time' I mean "BLING TIME!"  The medal is epic.  It weighs in at 3.66kg and comes with a custom build stand.  The ribbon has the names of the 120 runners entered in the race when it was first launched, it is the World's biggest finishers medal.  I beg all race directors not to seek to break this record as carrying it back to the car was rather tricky!    I also collected my 12 in 12 medal.  Rik normally does these presentations before the race, but on this occasion there were so many to be awarded it would have delayed the start (and possibly felt a bit like a production line or a school speech day with prizes for everyone) so he awarded them as we crossed the finish line - which made it feel a bit more special.

Thanks for a great day out.  I was still a little jealous of all the Endure24 posts, but I will be back there next year.  In the meantime, I have at least one more Phoenix Marathon this year - The Remembrance Day Marathon which means I'll get to see this route in the winter too, and I have Giants Head Marathon in a couple of weeks.  It seems that I am back up and running again!