Two half marathons and a parkrun.

Uh oh!  Phoenix have a new venue.... Double uh oh!  The venue is at a vineyard... triple and quadruple uh oh!  I get to add a second medal to my LOTR 'one ring' collection and it starts late enough to allow me to run Mole Valley parkrun  first.  And then one final 'uh oh' - there is also a race on Sunday which would add a third ring medal....

So you know what I did don't you?  I signed up for both races and decided to run the parkrun too.  A yellow weather warning didn't put paid to the plans so Husbando and I set off bright and early, or at least early, on Saturday.

Mole Valley parkrun is held at Denbies Wine Estate near Dorking.  As such it has excellent parking, very luxurious toilets, a huge cafe and a gift shop.  It also, being a vineyard, has undulations!  Still, we met up with friends, debated what to wear (hats or sunglasses/rain jackets or not) as the weather was very unpredictable.  The course is one lap, mostly up hill during the first half and down hill for the second.  I ran with a friend and we chatted all the way around so that I wasn't too tempted to run too fast.  I knew that certain bits of the parkrun course were the same as the route we would be running later, so I mentally noted which bits I would walk!  Huge thanks to all the volunteers and marshals!

After the run we had a cup of tea and a chat before getting ourselves to the start line for a second time.  Husbando and I ran the first half of the first lap together, but I wanted to take it easy so we sort of went our separate ways.  The route was fabulous, but during the first lap, I really wasn't having fun.  The wind, alternating rain and hot sunshine, did not make for a good time as far as I was concerned.  I was considering quitting after one lap and sitting in the cafe to wait for Husbando, but when I got to the aid station I thought that I might as well carry on for at least one more lap.

The aid station was well stocked, the team there had done sterling work filling up our water cups in our numbered cup holders.  Husbando was a few places ahead of me but I don't think he realised I was so close behind him.  I don't normally help myself to goodies from the aid station - preferring to eat my own - but today I really like the look of some lovely, glossy pretzels.  So I grabbed some, popped one in my mouth and immediately my lips and tongue reacted.  Peanut butter pretzels!  Who knew they were a thing?  Certainly not this nut allergy sufferer!  I spat the pretzel out instantly (apologies to anyone standing near me), grabbed my water to rinse my mouth out, ran to the car to get a handful of antihistamines and inhaled them.  My eyes were itchy - but my breathing felt OK(ish).  I was a bit shaken up - it is a very long time since I have made such a stupid mistake.  The RD checked that I was OK - I assured him I was, and that I wanted to go on.  I grabbed my epi pen and told him that he should feel free to stab me if he felt the need!  By the time I got to the first marshal point the marshal there (who is Mr White Star Running!) was aware of the situation and planning a marathon in my memory - I think we decided it should be called The Corpseathon and feature tombstone medals! 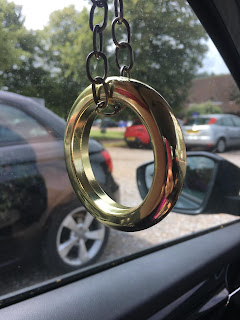 I spent the next 3 laps alternating between looking at the scenery and checking to see if I was getting any more blotchy.  The scenery was amazing, even if the weather was less than ideal and soon I was on my last lap.  Laps seem to pass much more quickly than out and backs!  A half marathon done in 2hrs 20mins is one of my slower runs, but not too bad considering the hills, the weather and the nuts! And the medal is great!

After a quick gin purchase in the gift shop (rude not to really) we drove on up to London to meet my youngest from the train and to check into a hotel as Husbando had a book fair on the Sunday.  We had afternoon tea in the executive lounge of the hotel.  I tried to remember that running 16+ miles doesn't mean I can eat endless scones with jam and clotted cream - but may have had more than one.....

We had an early night, and then got up early (Husbando likes to be at the fair before 7am and I had a train to catch.  I walked to Waterloo Station and then from Walton On Thames station to the Exel Leisure centre (about 3 miles in total) wondering how on Earth I would be able to run when walking seemed to be a bit of a chore.  I grabbed a coffee and chatted while we waited for the start only slightly disheartened to learn that we were running the dreaded 'blue bridge of doom' route! 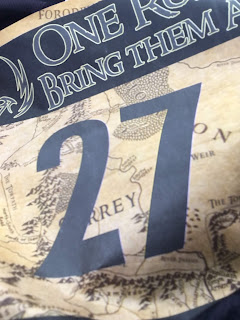 I needn't have worried about being able to run. Today was one of those days when everything just worked!  I had hoped that I would be able to keep my pace below 10min/mile - but actually ran 8.39min/mile and could happily have carried on running for the entire 6 hours.  As it was I knew I'd have to stop after 4 laps (half marathon) as I needed to get back to the hotel and shower before we had to check out, so I just settled for enjoying the sunshine, ignoring the rather blustery wind and chatting with people.  I didn't eat any of the peanut based snacks.... 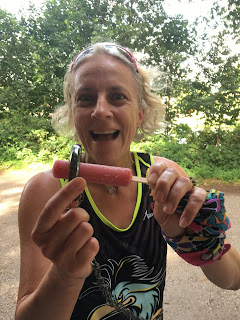 As I got to the end of my 4 laps Rik was handing out ice lollies and promoting an 'ice lolly selfie' competition.  As I got the medal at the same time as the ice lolly my photo had to combine the two.  Oh, and I finished today's half marathon 25 minutes faster than yesterday's!  1:54:07!

Thank you to Rik and his band of happy marshals, thanks again to the whole Mole Valley parkrun team - it has been a great weekend!