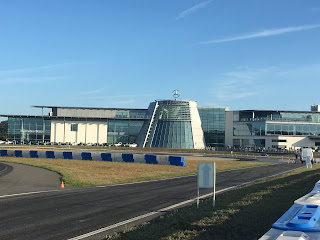 If you have known me for any length of time you will be aware that I do not like to be late.  In fact I consider 5 minutes early to be a bit too close for comfort, so when I booked a 10k race at Brooklands I made sure I knew exactly how I would get there.  We were staying up in London on Saturday evening, but I knew I could get the 7.11am train from Waterloo to Weybridge and the Transport for London website told me that the underground would easily get me to the station on time.  Happy days!  I'd booked at 10k race, my first chip timed 10k since 2015, because my training plan said I only needed to run 10k and fortunately RunThrough Events were holding a Running Grand Prix at Mercedes Benz World.

Panic began to set in when I turned up at the tube station to find it still locked... as was the next nearest station.  I found a cab - not too many around at 6.20am on a Sunday morning and paid a small fortune to be sped to Waterloo.  At least I wasn't going to miss the train.

It was a beautifully clear morning, but very chilly.  I was beginning to regret my choice of shorts and a vest top.  A brisk walk from the station along paths clearly signposted by the event team, took the edge off the chill and as long as I stayed in the sunshine it was bearable!  Race number collected, it was just a matter of waiting for my race to start.  Most unusually I didn't see a single person I recognised amongst the waiting runners. 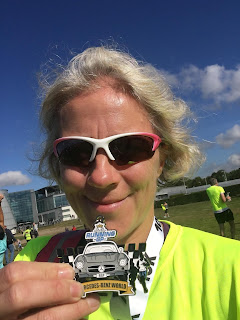 The half marathon race started half an hour before the 10k.  Watching the runners make their way around the track made it clear that this was quite a convoluted route!  They would be running 4 (and a bit) laps, with the 10k and 5k aces completing two and one lap respectively.  There were lots of 180 degree turns and many tight turns, it was quite hard to maintain a constant pace.  This was exacerbated when the 5k runners joined in too.  I spent a lot of time weaving around other runners.  At one point a marshal called 'keep right, faster runner coming through' so I moved over, only to realise that I was the faster runner he was referring to!  I hit 3 miles in 22minutes 36 but had no idea if I could keep up the pace for another lap.  I kept looking for the water station - noticing it only after I had run past it (it was on the outside edge of a curve we were running around) so had to double back a little to grab a bottle.  I was somewhat dehydrated, possibly due to attending a 50th birthday party the previous evening, but I probably didn't really need the water!

At about 7.5k into the race I heard a lady running up behind me.  She was breathing heavily, as she came along side me we chatted for a little while - but I was speeding up, I'd been coasting along quite easily and I thought that I might just be able to get a PB if I picked up the pace.  Until last night I'd thought my PB was 49minutes, but on investigation I discovered a flukey 47:59 back in 2015.  I had no idea if I could do it, my mental calculations were not helped by the fact that I stupidly got it into my head that 10k is 6.1k, could I do this?  I was overtaking people who had overtaken me earlier in the race and felt very comfortable.   I thought I might be amongst the top twenty females to finish, and my watch said 47:11 - so definitely a PB!

Needing to get back into London so that I could have a shower and then check out of our hotel room meant that I couldn't investigate the Brooklands Museum or Mercedes Benz World, but it looks well worth a visit.  I just collected my medal, my t-shirt, a flap jack (yummy), a couple of energy bar things and a banana and headed back to the train.  I could hardly believe the official results!  8th female, 1st in my age category and 47th overall out of a field of 311!  It does make me wonder if I could run a 46:XX 10k.

In fact a couple of conversations recently make me wonder how fast I could run if I a)trained properly and b) pushed myself a bit harder on the day!  JB says he doesn't enjoy racing as it is just hard work, Husbando's face every time I saw him at a recent half marathon, was a picture of misery.  When I run I want to have fun, chat to people, thank the marshals and so on.  I think I am a little bit scared of pushing too hard because, well, it might hurt and it might not make all that much difference!  Maybe I should join a local running club so that I can run with people of a similar ability regularly... 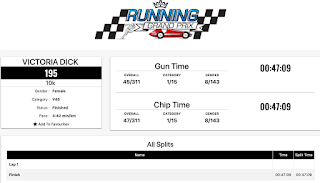