The return of parkrun and city centre races!

I missed the last parkrun before the global pause.  I decided to go to a yoga and brunch thing with a friend, it was lovely, I came away feeling relaxed - that may have had something to do with drinking Bucks Fizz with brunch.  I was on 389 parkruns at 99 different venues, and had big plans to run my 100th different venue the following week.  I'd told lots of friends and I was rather excited about reaching this milestone.  Obviously my plans changed.  There have been several glimmers of hope for a restart since last October, and earlier easing of rules meant that we could meet up in small groups to run, but it wasn't the same as parkrun.  There is something about parkrun that elevates it from just 'a 5k run in a nice place' to a real force for social good.

When I learnt that parkrun would return on 24th July I had a dilemma.  I wanted get my 100th run out of the way.  We were due to go to London (more of that later) so could started to look around for a suitable parkrun that didn't make us stray too far from our route.  I didn't want to make a big deal of it though for a couple of reasons: it wouldn't  be fair to the event team if the crowd that turned up for my 250th descended on a parkrun, and I didn't want people to feel that they ought to come and support me when they really weren't happy about travelling or mixing with people unnecessarily.  So I told the group I ran with regularly on Saturday morning and baked a cake. 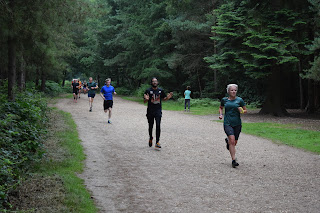 We arrived at Blackpark parkrun with plenty of time to spare, parked and made our way to the starting area.  What amazed me was how utterly normal and thoroughly wonderful it felt at the same time.  I may have forgotten (it's my age!) that we weren't supposed to hug people - but there were friends there I hadn't seen for however long this damned pandemic has been going on!  It was also a lovely treat to run a single lap parkrun.  The run brief was short and to the point, just enough to welcome us all back, remind us of the basic rules and to get us on our way.  The parkrun weather fairies worked their magic and it didn't start to rain until we had finished our teas, coffees and cakes and were on our way and I'd finally, in the company of the people who had helped me hold on to the last remains of sanity during lockdown,  done my Cowell Club run and we were on our way up to London.

After checking into the hotel, having a quick shower and a bite to eat it was time for a little retail therapy before dinner and a movie and an early(ish) night because I had a race, a real, live actual race in the centre of that there London Town.  The race was the ASICS London 10k.  I had totally forgotten that I had entered the race (probably way back in 2019) until an envelope with a race number inside it arrived.  There was information about the time I would need to arrive, but no date on the envelope - even when I had worked out what the race was it had taken me a while to find the date on the organiser's website!  It only dawned on me as I walked to the start, thankfully very close to our hotel, and witnessed the somewhat shambolic organisation, that this was a rebranding of the old British 10k - a race I think I said I would never do again. 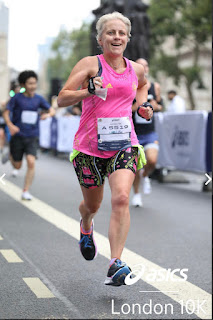 After not taking it terribly easy at parkrun on the Saturday I was a little concerned about a 10k, but decided to just enjoy it.  It felt good to be lining up with a lot of other runners and a slight downhill start made for a speedy start despite the warm and humid conditions.  The route was a short, sharp dash around the West End and Parliament Square which ended with us running up Whitehall.  As we left Parliament Square there was a sign that said '0.1 to go' which I naturally assumed meant 0.1km to go.  A mere 100metres!  I picked up the pace - only to turn the corner and see that the finish gantry was all the way up Whitehall!

I finished in 48mins 28secs - about 2 minutes slower than my PB, but much faster than I thought I would run after such a long break from races.  The race photos and videos were free, which is lovely, but the video did reveal that I needed to upgrade my sports bras!  A tech t shirt  (that actually fits) in a canvas goody bag was a nice upgrade from the cotton t-shirt that could double as a tent in plastic carrier bag that I'd been given at the old version of this race.

The following week was busy, one night in Manchester, catching up with our two oldest children, two nights in Leeds while Husbando did a book fair and I mainly sat in cafes and read books to try to avoid the rain! We knew we wanted to do a parkrun, but were unsure where we would end up.  In the end we discounted parkruns that would involve getting the car out of the hotel carpark and walked to Cross Flatts parkrun, it was an interesting walk through Holbeck - who knew that sex workers plied their trade at 8.30am on a Saturday morning?  The parkrun was one of the most welcoming ones I have ever been to. Lots of interesting chats with other runners, including one girl who had moved to the area just before the lockdown, her home was so close that she could see the start of parkrun from her window but she had never run parkrun here before (she was in Wales last week) and is moving this week so this is her one chance to run it!  The parkrun is not flat!  And the long uphill section is particularly sapping - especially on the second lap.   The hill isn't terribly steep - but it just goes on and on... Thankfully there was an enthusiastic marshal half way up the hill!

Saturday evening saw us back in London.  We had the London Landmarks Half Marathon to look forward to.  On a whim, having not got a place in the ballot, I applied for places that were released on a first come first served basis a couple of months ago and got them.  I seem to remember it was not cheap.  I'd put down a predicted pace a little slower than my PB, and so Husbando and I found ourselves in the first 'Lightening' wave.  Our hotel was close to the start, so we didn't need to leave a bag on the baggage busses  just turning up 'race ready.'  I bumped into a headteacher I know from Twitter - nice to put a face to a name, and we had a lovely conversation with twins Debs and Linda who have raised huge amounts of money for Cancer Research running in memory of their brother.  I showed Debs the 'rabbit ears' technique for tying her laces (and I am claiming that this was instrumental in her subsequent PB!) 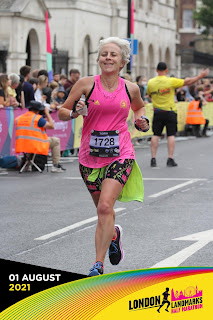 The atmosphere at the start was amazing.  Again I had no idea how this race would pan out.  We decided that it should be a 'training run with a medal' and then I set off far faster than I would like - just the excitement of being with so many other runners!  The route took us on a really bendy route through the West End and the City, we went over Waterloo Bridge - a bridge I have walked over so many times without knowing that it used to be referred to as the 'Ladies' Bridge' because it was built by women in WW2.  We overtook Bagpuss on the bridge - and had a chat with other runners about whether it could be the real Bagpuss as running is far too energetic for a saggy, baggy cat - even if Emily does love him!  We also overtook a 'guide dog' - I am really hoping that there were several people in guide dog outfits, otherwise I overtook the same person three times.

Despite going off a bit too fast we managed to maintain the pace fairly well until about 9 or 10 miles.  In common with lots of races in built up areas, my Garmin was wildly out of sync with the mile markers, by 9 miles it was about three quarters of a mile out, and I lost the plot a bit.  I was trying to work out how far I had left to run, what pace I was actually running (as opposed to what pace my watch said I was running) and I really couldn't do the maths!  I'd also not taken any nutrition with me (no mini malt loaf in my pocket that day) and there was only water available - so my energy levels were beginning to drop.  I wouldn't normally take anything with me on a training run - but I also wouldn't run as fast.  My pace dropped and I told Husbando to go on without me.  I changed down a gear, gave myself a bit of a talking too and settled into a slightly slower pace. As we passed the 13 mile marker my Garmin was reading just sort of 14 miles, but I didn't care - I was on target for a sub 1.50 finish - way off my PB but not bad for a training run, and I didn't feel too tired at the end.  (Official finish time 1.48.37).

The support on the course was amazing! It did feel as though I was on a running tour of all the places I used to work in (Chancery Lane, Holborn, Poultry, Cheapside, to name but a few) and we were very lucky with the weather, it was warm and humid but the rain held off until later in the day.  I really do think that this is the best city half marathon I have ever taken part in - all the best bits of the London Marathon (atomsphere, supporters and sights) without the boring bits!   I'll definitely try to get a place again next year.