How to feel really old! 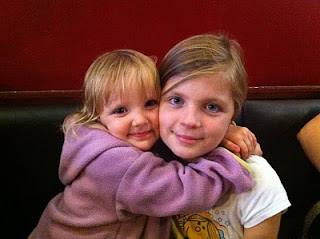 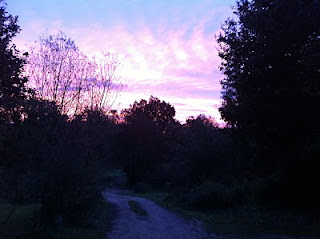 Got up very early today to pick up eldest son from a sleepover in a nearby village. I needed him home to babysit for his younger brothers while I took the girls up to London. I was rewarded by a beautiful sunrise. The iPhone camera doesn't really do it justice, but let's just say that red sky at morning really is a sailor's warning - it was rainy all day!
Once in London we had a lovely stroll through Harrods, much squealing of delight by a 4 year old let loose in the toy department. She was particularly thrilled to meet Tinkerbell in Christmas World! 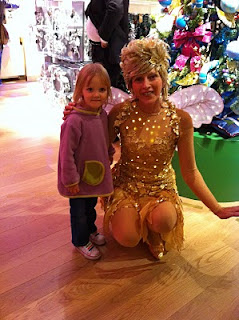 After a cup of tea for me, juice and dough nuts for the girls, I allowed me to be persuaded to go to Abercrombie & Fitch. I began to wonder about the so called 'dire economic climate' when we had to queue for about 15 minutes to get into the store! We walked past the same naked hottie posing for photos with the teenage, female customers and entered into a living hell! Dark, hot, really crowded, loud music and smelling like my teenage son's bedroom after he has applied liberal amounts of aftershave!
We eventually found an overpriced hoodie that madam liked, and went to find a cashier. I was stunned at the length of the queues. Teenagers were throwing piles of vasty expensive clothing at the cashiers. I would think twice about spending so much money on a sweatshirt for me. (This was a belated birthday trip for my older daughter, so she had birthday money to spend). Where do teenagers get so much money from? We queued for longer than I would consider queueing for a ride at Disneyland! The difference being that at Disney they tell you how long the queue will be and you can choose whether to join it or not, today we'd invested so much time in queueing and had no idea how long it would be until we got to the front, so we just waited and waited! Still, the birthday girl is happy with her purchase, and I will never go back in there again!
Posted by MrsBridgewater at 18:54