Anyone for ice skating? 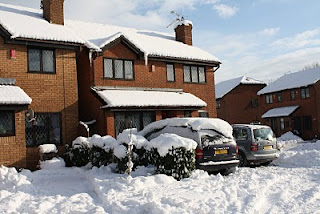 The trouble with writing something that purports to be running blog is that, when one is not running it is difficult to justify a blog entry! My children broke up in stages, the 4 younger ones, who cannot really be left home alone, finished a week before the big, supposedly responsible one. This, and a madly hectic social life, for the children rather than me, meant the I barely had a chance to run. The last time I ran outside was on 12th December!
Then, just when the child-who-is-old-enough-to-babysit-if-I-bribe-him-enough finished school, the snow hit! The photo was taken during a brief sunny spell. Since then we have had more snow, a wee bit of thawing then refreezing, resulting in very icy road and pavement conditions. I've seen some nifty looking snow chains for shoes that might help, but in common with the local council I put off buying such useful devices as we 'never get weather like this!' Cabin fever sets in if I don't get a good run every few days. I also eat more when not exercising as I get fed up and eat to cheer myself up - this is A BAD THING! I know as I snaffle down the Mars Bar from my secret stash of French Mars Bars (they are nicer than English Mars Bars and slightly smaller so therefore they are a diet food) that I don't need the calories, I know that I am just eating because if I am eating I can ignore, for a few seconds, the mountain of laundry that needs sorting, but I eat the thing anyway. And I don't really enjoy it. That's the really sad thing!
Anyway, today I decided enough is enough, and drove cautiously to the gym. I arrived just at the start of a short spinning class (20 mins spin, followed by 30 minutes of something requiring co-ordination in the studio), so I joined that. It was a good kick start, giving me the impetus to work out indoors. I followed this with a 5k run on the dreaded treadmill. Not too bad tonight as I listened to 'The Archers' whilst running - how rock'n'roll am I?! It isn't the same as being outside. I don't get the same sense of escape and I think that knowing I can hit the stop button at anytime takes the edge off the whole thing. If you are 4 miles from home and want to stop you can't, unless you want to 'phone home and ask for a lift (and I'd have to be in a really bad way to do that) you just have to keep plodding on! I normally find that, after another mile I have gotten over the 'oh my god I can't move another step' feeling and have started to enjoy the run again.
So, children are now all off school. Nativities and carol concerts have been enjoyed, pre Christmas traditions (Olympia for the horse show, visits to Santa) have been observed, a couple of shows (Armstrong & Miller and Tim Minchin) have been enjoyed. All that now remains is a bit of last minute wrapping, which will be tricky when my fingers are crossed that we won't have too much more snow before Friday because we want to go and see Mickey Mouse!
Posted by MrsBridgewater at 20:23