What is it with me and losing things in France? 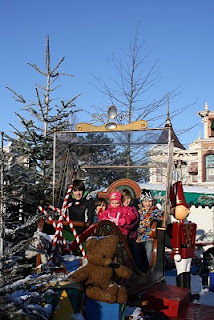 'That was the best Christmas ever!'

Not just my words, but those of all the family!
We left home at about 3pm on Christmas Eve and drove down to Maisons Laffitte to stay in Cerys & Paul's house, while they were back in England staying with their families. We didn't bring presents with us, as there would be no room in the car if we did, but Santa managed to arrange stocking presents for the children. Arriving late in the evening, the children put on their traditional new pair of PJs (from Father Christmas) and went to bed. Luckily they were all tired and didn't take long to drop off. They did wake early. Very early! I normally have to wake my children up, but they woke up at 6am French time! That is 5am UK time and far too early for me to be civil to anyone - even though Cerys had left the caffeinated ground coffee easily accessible! We managed to put them off until 7am, and then they all piled in to open their stocking presents. Sonic screwdrivers, watches, autobiographies (Keith Richards) and toothbrushes were all well received.
After a quick breakfast followed by topping up the oil in the car (pesky warning lights) we set off for Disney. I've never seen the roads as empty - it is normally stop start traffic until about 15km before you get there. I noticed that the small boulangeries, tabacs and cafés were open - even though it was only 8.30am!
Disney was chilly, about minus 4c, when we arrived, and didn't seem to get much warmer during the day. We realised that various children had forgotten their gloves, so headed into a shop to buy some more. I'd just paid and we did the normal count up of children when we realised Esmé was missing. I wasn't worried, as normally when one can't find a child they are engrossed in something on the other side of a display and you locate them a minute or so later. This didn't happen. We scooted around looking for her, having told the other 4 to stay in one place and not to move on pain of death! We started shouting her name, but still couldn't find her. We asked to speak to someone about a missing child and were asked how long she had been missing for - I said 'about 15 minutes' they told me they would file a report when she had been missing for 30! I tried to have a hissy fit in broken French, he tried to calm me down in broken English. I was torn between getting this man to do his job and running round the park looking for a small girl in a pink ski coat, and believe me there must have been hundreds of small girls in bright pink ski jackets!
Eventually, after half an hour, he took me to 'Lost Children' to fill in a report. No one would believe that she had a 'Pink hat with a pig on it!' They made pig noises at me and asked if I was sure, I said yes, and then remembered my camera and showed them a picture taken just as we arrived showing madam with her Peppa Pig hat! Forms were filled, 'phone numbers exchanged so that they could 'phone me 'if they found her' and I could 'phone them 'if' we found her! I wasn't mad on the use of the word 'if' or the suggestion that I go off and enjoy my day until she turned up again!
Luckily, just as I was finishing this process, as with all things French a lot of paperwork was involved, and about 45/50 minutes after we had first noticed she was gone, Joshua spotted her. She was chatting away to a French lady and walking back towards the shop. She'd gone out of the shop, all the way up to find the Slinky Dog ride (how did she remember how to get there? The last time she was there was September!) and then back again. She was quite bemused when I burst into tears and kept hugging her! She was very pleased with herself and had enjoyed her adventure!
The rest of the day was great fun! Lots of rides, minimal queues, and all of us knackered by about 3pm! We left Disney, stopped at a boulangerie in Maisons Laffitte to pick up some bread, and went 'home' to make supper! Pasta may not be a traditional choice for Christmas dinner, but we've had it before (by popular demand) and will probably have it again! This was followed by Doctor Who, and reasonably early nights all round!
Boxing Day followed a similar pattern, with unwrapping of presents replaced by packing of car! Disney was busier, but not excessively so. It was much colder, minus 6c when we arrived! We didn't do as much today, picking and choosing rides where we wouldn't have to wait too long and which would offer some warmth!
We are back home in England now, and will open presents tomorrow. It has been a lovely Christmas, very different to normal, but very nice all the same. We are hugely grateful to Cerys and Paul for letting us use their house as a base! I can't believe how stress free the whole weekend was (well, apart from losing Esmé!) It was far more relaxed than a weekend at home!
Posted by MrsBridgewater at 23:16