A few days in the Dordogne 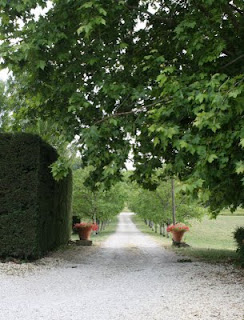 This is the sight that began my morning runs on Saturday and Sunday! I was staying at a lovely B&B as I needed to be in Gageac-et-Rouillac at 2.30pm on Saturday for the wedding of an old friend to his lovely young bride. Given that his roots are in God's own county and the bride's parents are Oxfordshire residents, it was a long way from home until you factor in the fact that the groom's parents own a gorgeous property in the area.
This was my first trip to the Dordogne, and I fell in love with the area! Stunning views across the valley, beautiful weather, and hospitable hosts! A group of us were staying at the B&B for the weekend, which made a great weekend extra special. Meeting up with old friends I hadn't seen for too long and making new friends. I am grateful to the kindness everyone showed me. I was travelling alone and decided not to hire a car - so was reliant on friends for lifts. The wedding, and the festivities that accompanied it were wonderful! Much laughter, a few tears, plenty of Champagne and excellent food, lots of dancing.
Because I tried to eat my own weight every day and despite drinking far more of the fantastic local wines than is healthy (and I do mean local, at our B&B we drank wine from the vineyards we could see from the window, and in the Salle des Fetes the vineyard was just over the road) I decided a run on both mornings was a necessity as much as a pleasure.
Breakfast wasn't served until 9am and while this gave me ample time for a run it meant that I was running on an empty stomach! I wasn't organised enough to have any pre run snacks in my room. A combination of low energy levels, a hangover, a big hill and, on the second morning, a twisted ankle following a trip the night before, meant that my runs were slow. At least I made the effort! And I was rewarded with some spectacular views.
I haven't been running today. I figured that I'd give my ankle a rest. To be honest, if I'd been in a fit state to realise that I'd hurt it yesterday morning I wouldn't have run then either, but I was about a mile and a half out before I realised that this wasn't just cold muscles protesting, and then I put two and two together and remembered that I'd gone over on that ankle as I'd clambered into the car the night before!
Plans this week include housework, I want to have a massive clear out of all the accumulated clutter. I have minimalist dreams and a pack rat mentality and we are running out of space. I will see how my ankle feels tomorrow and make decisions about running based on that.
Posted by MrsBridgewater at 18:49