An up and down week!

This has been a strange week, with very little running.
On Tuesday I managed a 6.2 mile run, up Brockham Hill and back down through the edge of town. It was also the day I found out that I had an interview for a new job. As is the nature of job application/interview procedures in the teaching very little time passes between being asked for interview and the actual interview. I received the 'phone call at Tuesday lunchtime asking me to attend interview at 8.30am on Thursday 9th June! When you consider that the deadline for applications was 10th June I thought that the school was even speedier than normal! The rest of Tuesday and most of Wednesday were spent planning, scrapping and re planning the dreaded interview lesson. Teaching an unknown group of pupils in an unfamiliar space is daunting, especially when one teaches a practical subject like science! Nothing goes to plan, everything takes longer than anticipated. I'd learnt from my one previous teaching interview though, and ditched group practical work in favour of some interesting little demos (that I got pupils to help with) and group tasks. It seemed to work, and although I spent Thursday late afternoon and early evening jumping every time the 'phone rang and decided not to go for a run because answering the 'phone and heavy breathing to a head teacher is not a good thing, I got the job! I start in September!
Friday saw me up at 5am to take husbando and a car full of books up to London for the bookfairs. I also managed to find a few moments to set up a Facebook page for the shop, what he does with it is up to him!
My older daughter did her first Parkrun on Saturday. She did very well, considering she shouldn't really be running because she has a sore throat, and she had to stop for a nose bleed mid run! Bad mummy wasn't there to help her! I felt as though I was running very slowly, but was only about 30 secs slower than last time. She finished in 35mins. I know she can run it faster than that - and she is looking forward to running it again and getting a better time.
Saturday also brought the disappointing news that my oldest son has not got into the school we were looking at for him. His maths paper seems to have been the sticking point. We are gutted for him. He had been asking his maths teacher to help him catch up on the work he missed when he was so ill (off school for a term and a half), and she was as much use as a chocolate teapot! She'd say to us that he had to tell her what he had missed! We said that he didn't know what he had missed as he wasn't there, and she had the cheek to say that she had no way of knowing what had been covered in the classes she taught in that time frame! To say I was gobsmacked is an understatement! However, onwards and upwards.... we are looking at another school, it is very small, and delivers very individualised education. I was lucky enough to spend a couple of days there when I was looking for a placement school, and remember thinking how great it would be for my biggest boy. I truly believe that he needs to move schools. He is demoralised, bullied and under motivated where he is now. He comes home nearly every day to tell us that he has had yet another substitute teacher who has taught them nothing, that he has been picked on again and that only he and one other boy contribute in Mrs M's lesson - the rest just muck about. And this is the teacher who is so unaware of who my son is that she wrote a school report that bears no resemblance to him - and which she could not substantiate when called upon to do so. The comment 'I have 32 children in that class, I can't be expected to know who they all are!' should never cross a teacher's lips in front of parents!
Today seems to mark the end of the drought we have been enjoying in the South East. It really has been weather for ducks today! I normally get up early on a Sunday morning to get my long run out of the way, but there is no fun in getting up
at sparrow fart if it is ghastly weather outside, so 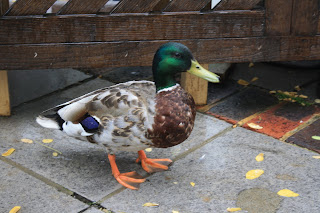 I rolled over and had an extra hour in bed instead, thinking that it was bound to clear up later. I was wrong. We took the children to Wisley to meet up with some friends who were visiting from Texas. My oldest son came under duress. I told him that not coming was not an option, and that under no circumstances was he to enjoy himself at any time! Our children and the visiting children had a whale of a time. They were fairly unbearable while we were having coffee (eight children waiting for grownups to drink coffee can be like that!), but once we finished coffee and they could run about they were fine! We made excellent use of the lovely glass houses, the children played hide and seek and tag, and while they may have annoyed some of the other visitors they had a blast! It was 3.30pm before we got home - not bad for a day out to a garden in the rain!
When it was obvious that the weather was not going to improve I decided I'd just have to get on with it. I set off up Brockham Hill but only got about halfway up before deciding that running uphill in a river was not a good idea! Passing cars didn't seem to understand that if you drive at full speed through puddles you will soak the poor runner cowering at the side of the road. Rude words were shouted at cars as they went past! I came down the hill and decided to stick to pavements. I must have looked like a drunkard as I weaved my way around puddles! It really was miserable. I don't mind a bit of rain, but is was very wet, and the wind was bitter. I only stuck it out for 5.6 miles. I was disappointed as I'd been looking forward to a lovely long run. Ah well, tomorrow is another week...
Posted by MrsBridgewater at 22:12