I am a marathon runner! 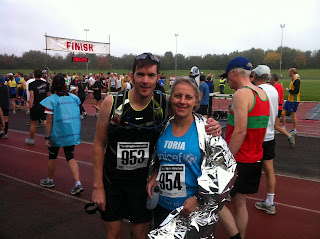 This morning I had a lie in, compared to last week, but I was still out of bed  by 6am.  A quick cup of tea and a bowl of porridge while checking emails  before I collected my carefully organised kit and jumped into the car.  I'd left my race number on the keyboard last night so that there was no way I'd forget it, which is logical, until I moved it to send an email.  I'd only got 5 miles from home before I remembered and headed back.  No matter, I arrived at my friend's house at the right time, and was welcomed by his gorgeous little boy who had made us paper flowers for luck!

The Abingdon Marathon starts (and finishes) on a track.  It is a smallish race, with only about 1,000 runners.  I had a couple of hopes for the race, one was to finish in a higher position than my race number.  Looking around the assembling runners I began to doubt that this would be possible.  Very fit and fast looking people were running around the track to warm up, while I huddled under my space blanket!

The race started promptly and we were off.  My aim was to run 10 minute miles, in the hope of coming in at around 4 hours and 20 minutes.  As this was my first marathon, I also accepted that things might not go to plan, and that four and a half hours would be acceptable and, if I'm honest, I'd be happy to finish before the course cut off of 5 hours.

Running conditions were lovely.  Cool and cloudy.  I had only done one short run since last weekend, and I was raring to go.  10 minute miles were proving impossible to maintain.  At about 1 mile in, Rohan came up behind me and told me that I was running at 8.40 minute mile pace.  I knew this, but I couldn't make my legs go any slower.  I needed a hill or something to slow me down.  I ran the first 5k in a respectable parkrun pace, and the first 10k was a season's best time for me.  Oops.  This was not the plan!  I walked through all the water stations in an attempt to slow myself down, and fall back down the field a bit to be running with slower runners.  It worked a bit.

Around 10 miles I started to get very bored and wondered whether I could be bothered to finish, my foot was sore, but no more so than normal.  With a few notable exceptions (the Fetcheveryone fetchpoint being one of them) there was very little on course support.  The marshals were plentiful and excellent, but compared to big London races, it was lonely out there!  I ran 3 or 4 mile stretches on my own.  As the roads weren't closed MP3 players weren't allowed so I sang a bit in my head to keep myself going.  I also did some tricky maths problems to pass the time.

The fetchpoint at mile 12 was a huge boost.  I still felt great, but bored, bored, bored!  Here though I got to meet people I've only chatted to online, and two lovely people I don't see often enough!  I was so thrilled to see Colin that I ran across the road to give him a hug. He lifted me clean off the ground!  I also dallied a bit to chat to the lovely Elaine.  You'd be hard pushed to find two nicer people to bump into during a marathon.   I carried on invigorated, and remotivated, but slower.  Which was no bad thing.

I don't really remember when it started to feel like hard work.  I do know that I was getting slower and slower, looking forward to the water stations as an excuse to slow down, but it was progressively harder to get going again.  At one point I was desperate for a loo.  There were no loos.  I was on an industrial estate, so had to look around for a suitable bush!  Not the high point of my day, especially when I suddenly thought that the industrial park might have more CCTV cameras than the leafy lanes of Hampshire!  The marshals were excellent, encouraging us every step of the way.  Even if they did say, at 22 miles, the finish was 'just around the corner!'

At 25 miles my Garmin battery died.  It was fully charged at the start.  Clearly I need to run faster or get my Garmin serviced.  I hadn't checked my watch for a while so I had no clear idea of what sort of time I was on for.  All I could do was listen to my legs - which were screaming!   My feet had been perfectly dry until I came into the park, where we had to run through a big muddy puddle!  The cold water felt lovely after the initial shock.

The race ended with a partial lap round the track.  As I passed the '200m to go' sign I decided that I was not content to shuffle over the line and pushed hard for home - a moment that was caught on camera by Colin: 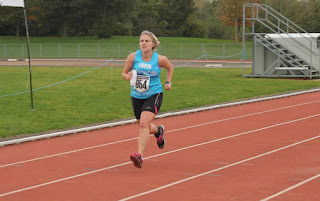 I finished in 4hrs 23 minutes and 8 seconds, which I am reasonably happy with.  Definite room for improvement, but I feel I can run better and faster if I do this again.

After the race we collected goodie bags, t-shirts and medals (see below) and had to walk up stairs to exit the track.  At the top of the stairs we were given tea and biscuits, which were very welcome.  The next task was to walk down stairs, carrying a polystyrene cup of tea, biscuit, bag, t-shirt, medal and (in my case) a water bottle!  I think running a marathon was easier than that!

Meeting up with super speedy friends afterwards, it was reassuring to see the that they too were walking strangely!  We managed to navigate our way to a Pizza Express we had passed during our run where we discussed our war stories and demolished pizzas!

So now I can say that I have run a marathon.  Would I do it again?  Yes!  But I would do it differently. I need to work on getting the pacing right so that I can enjoy the latter stages more.  I am so glad I did do it though!  If anyone wants to sponsor me retrospectively for this (I am fundraising for UNICEF) please follow this link! 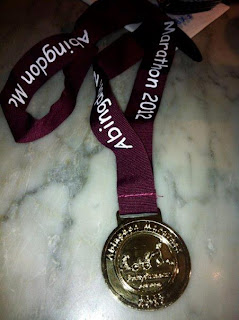