Sunday in the park with Toria 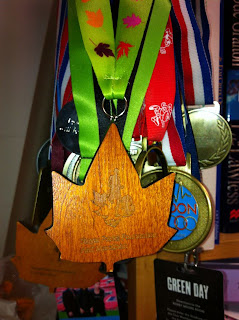 There was frost on the car when number one son and I left the house just before 7am this morning, but the clear skies boded well for a pleasant day ahead.  We had a clear run up to London, with the music being supplied by my son.  He has excellent taste in music, so we had an eclectic mix of old favourites and up to the minute music I hadn't heard before.  We were only driving because trains on Sunday don't start early enough to get into London, rather than try to find a parking space near Hyde Park we dumped the car at Hammersmith and took the tube in to Knightsbridge.

The park was heaving!  It seemed far busier than last year and despite the fact that it was raining last year and sunny this, it was very muddy in the race village.  Despite this, and horrendous queues for the loos, the organisation was great.  We checked our bags, arranged where we would meet up and I toddled off to the start of the half while my son went to wait for the start of the Pulse 3K.

My aim was to treat this as a training run with the added benefit of a medal and a goody bag (and the Royal Parks Half do the best goody bag I've ever had). I should have moved back a starting pen and not started with the 1hr 50min pace runner!  I ran the first 3 miles faster than any parkrun I have run since injuring my foot!

Then disaster struck.  My stomach started to cramp - I needed to find a loo, and I needed to find one pretty fast!  Luckily there were some convenient public loos on the Embankment with the coin operated barriers left open for the day.  There was the inevitable queue, but these loos were much nicer than the port-a-loos at the start of the race.  Sadly this was not the last comfort break I would need to make.  As we turned into The Mall I ducked into the Mall Galleries and cheekily asked to use their facilities, and there were two more stops needed in the park.

The running itself was tough.  My splits weren't great, I'd gone off far too fast and that dodgy tummy wasn't helping.  I was breaking in new(ish) trainers for the marathon and my feet did feel a bit odd.  They are the same make and model as last time, but it felt as though there was a seam across the ball of my foot.   Support on this run is generally great.  Lots of charities and lots of relatives cheering like mad, but there is a 'dead zone' in miles 9 through 11, which is made up of several, long, straight paths through the park.  This was tough last year, but was soul destroying this year.  To try to overcome my misery, I decided to talk to other people who looked like they were struggling even more than I was.  It worked, a bit!  After the race another UNICEF runner came up to me and said that me saying, as we went down a slight incline 'Let the hill do the work, you haven't got far to go!' really spurred him on when he was about to start walking.

My son, having completed his race 'in about 12 minutes', used the Royal Parks Half App to find out where I was and managed to see me in the final 800m.  With the end in sight, I did manage to up the pace a bit, running the final 450m in 8.12 minute mile pace.  My overall time was 2hrs 02mins and 57 secs - nearly 10 minutes slower than last year!

UNICEF, as ever, put on a great spread for their runners.  The massage was very welcome and much snacking was done by both of us!

I don't feel too achey this evening.  I think the many miles put in over the summer have helped.  Not sure whether it will be enough for the marathon.   I do know that if I have a dodgy tummy it will be impossible!  I don't think I'd even want to start!  I am gutted about my poor performance, while trying hard to be properly pleased (and not just a wee bit jealous) of all my local friends who ran the Basingstoke Half Marathon - they have all achieved FANTASTIC times on a really tough course!

Thank you to everyone who has sponsored me via my UNICEF fundraising page.  In two weeks time I will, hopefully, be tucked up in bed having completed my first marathon!
Posted by MrsBridgewater at 19:16