Well, I didn't expect that to happen!

What a day!  Miserable, grey weather as I left home, but not actually raining.  I had packed a cap, and a spare set of clothing to change into afterwards, and was trying to ignore the pain in my right foot.  I was hopeful that the rain might hold off until lunchtime.  After all, this was my first race since the end of October, was it too much to ask for nice, dry weather?

Obviously it was!  As I pulled into a friend's driveway the heavens opened and I decided that there was no way I was going to get out of the car to tell him I was waiting, so resorted to 'phoning him instead!  The drive to Reading was as uneventful and peaceful as it could be given the weather conditions (one nasty accident seen) and the fact that we are both quite capable of talking for NATO, and we were soon parking in a very puddle ridden car park and skipping our way delicately to the Madejski stadium.

Way back when I signed up for this race I clicked on a button that mentioned running as a 'Mizuno VIP.'  I'd assumed that this was for people who were planning to run super fast times, but soon learnt that all I had to do was send them my details, plan to run in Mizuno trainers, and I too could be a VIP!  I was very glad I did this - it meant that I, along with guest, could wait in a room inside the stadium.  Given that it was tipping down outside, a nice dry refuge, with proper loos available too, was hugely welcome.  Snacks and sweets were on offer, as were free water bottles, t-shirts (purple), caps and running belts/bum bag things.  I do like a freebie!

As the room filled up we saw several other people we knew and chatted away to pass the time.  Soon it was time to head for the start line.  A sea of runners clad in ever so fetching bin liners made their way, in the rain to the start.  A pre race warm up had been organised, but whoever was running it didn't seem to be aware that we were packed into the starting area like sardines.  Bashing someone in the solar plexus with your elbow isn't the best way to meet strangers!  Most of the people near me warmed up by grumbling about the weather. 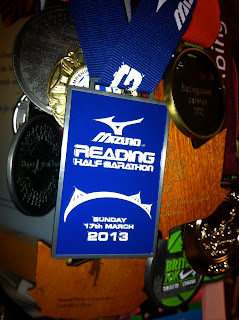 Just after 10am the elite and fast paced club runners started their race.  The rest of us started to shuffle slowly towards the start line.  It had stopped raining!  Hurrah!  Maybe it would stay dry.  My dream for the day was to run 9 minute miles, maybe slightly over, but less than 10 minute miles.  And I ran the first three miles in just under a 9 minute mile pace.  This included the only significant hill on the course - a short sharp one from about two to two and a half miles.  The next mile I ran a bit faster, and then the next a wee bit faster still until I settled down for the remaining miles in at around 8.20 minutes per mile.  It was a fun race.  Crowded the whole way around and with loads of supporters.  There was one very narrow part where we all had to slow down to walking pace to get through a narrow arch, and I was constantly changing directions to get around people.  The crowds were so enthusiastic that they spilled on to the roads at several points making the congestion worse!  Between 6 and 7 miles I passed the 1hr 55min pace runner.  He'd been about 100' ahead of me at the start, and I'd lost sight of him as the runners spread out.  I chatted to him for a few metres, asking where the next hill was and then we parted company, with me going on ahead.  As I turned the next corner to go up the hill I passed a pub handing out beer!  I decided not to partake!

At the top of the shallow, but longish, hill I met another fellow Basingstoke parkrunner.  He accused me of 'breaking' him at parkrun yesterday!  He'd assumed that I'd be taking it easy with the race coming up today, and that had been my intention.  Somehow, despite the mud and the rain and a plan of jogging round, I'd finished in 25.11 with him finishing just 5 seconds behind me.  We chatted for a few minutes and then I drifted ahead.  I had thought it would be nice to run with him for the rest of the race, but I was enjoying running too much!

At some point it had started raining again.  It was coming down in stair rods and we even had hail and a bit of sleet.  It really wasn't the sort of weather for taking your time and looking at the scenery!  I had been told that the worst bit of the race was the last few miles, where you can see the stadium in the distance but it never seems to get any closer.  That wasn't a problem today as it couldn't be seen through the mist, clouds and rain!  At 11 miles in I looked at my watch, did some maths (not easy for me while running) and realised that I was in with a chance of a PB.  But only just.  I cursed myself for not looking at my watch earlier as I knew I could have put in more effort earlier on had I known it was a possibility.  The last couple of miles seemed very long, mainly because I was repeatedly looking at my watch and working out the maths! 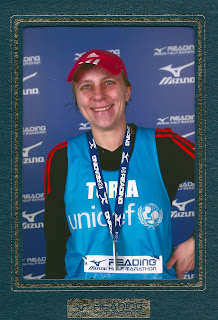 The noise as we entered the stadium was amazing, there is no athletics track so we ran on a metal/plastic surface around the edge of the football pitch.  I was worried about slipping as it was very wet!  So, it seemed, were a lot of people and they seemed to be slowing down as they approached the finish line.  I crossed the line and looked at my time.  I couldn't believe it!  1:52:16!  About 40 seconds faster than my previous PB, set on a flatter course in ideal running conditions.  Of course, there was no one there at that very moment to share my joy - but I was smiling from ear to ear as we walked out of the stadium like a column of colourful worker ants.  You could see the steam rising from us as we walked!

Back in the VIP lounge I met up with friends and went to pose for my free photo and claim my free massage.  The massage was great.  A good 25 minutes spent stretching and pummelling my legs.  She had a good look at my poorly foot, treated it firmly but gently (it had been screaming at me all the way around) and recommended some exercises that I can do dot strengthen it.

On the way back to the car we devoured bacon rolls (the first bread I have eaten since the beginning of December) and hot coffee.  I was very glad that the car has heated seats as I was shivering by the time we reached it!   All in all it was a great day and I will be signing up again to run it next year - but I would like some better weather!  I am thrilled with my time, but more than the time, it was great to really enjoy a run.  Especially when the weather should mean that it was an utter nightmare!  I am looking forward to getting my foot sorted out and maybe, just maybe, running my next half marathon in under 1hr 50 minutes.