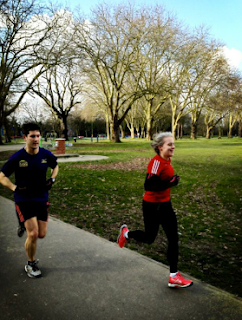 It started with a suggestion made on Facebook.  I'd been listening to the parkrun show and the host, Danny, waxed lyrical about a small parkrun in North London.  I'd noticed Pymmes parkrun as I'd perused the parkrun site and always thought it would be interesting to run - with around 10 - 15 runners every week it would be very different to Basingstoke.

So, in a moment of rashness, I asked some Basingstoke regulars if they fancied a road trip.  They did.  At just gone 7am this morning, having driven over to Basingstoke, I did point out that it was their job to stop me when I came up with daft ideas that involved getting up early at the weekend!

On arrival at Pymmes Park we got out of the car and looked around, unsure as to where the actual start was.  Luckily one of the volunteers parked just behind us and pointed us in the right direction - about 20' from where we had parked.  Despite a brisk wind the weather was much more pleasant than the last two parkrundays!  There was blue sky and a bit of sunshine too. 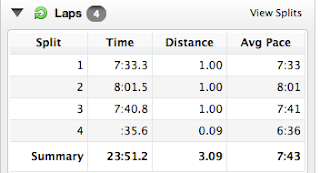 Lining up at the start, all 14 of us, was very strange.  I stood next to the guys I'd travelled up with.  Big mistake, HUGE!   They are all much faster than me, I think I managed to keep up with the 'slowest' of the three until the first corner, when I said 'I'm too bloody old for this' (I was trying to keep up with a 17 year old!) and fell back.  I have to say that, had someone told me about the pond with the geese I may have reconsidered going to Pymmes Park.  I am not a huge fan of birds, especially geese!  By the second corner I was convinced I was last.  With such a small field, despite the fact that it was three laps, it felt a bit lonely out there!  I did eventually lap a few people, but I wasn't entirely sure if they were parkrunning until I saw them go through the finish funnel.  About a quarter of the way through the second lap I overlook the bloke in the photo above.  It was good to be able to hear someone else behind me - I just hoped that I could stay ahead.  While he spurred me on  a bit in the final lap his younger legs were too much for me - about 300 metres before the finish he pulled ahead and I couldn't catch him.  Maybe if he'd left it a bit later if I'd have stood a chance.

As it was I finished 8th, as second lady.  Our little touring group ended up being first, third and fourth (first lady) to finish, so I rather let the side down!  We had great fun though, and cooked breakfasts were enjoyed at Mario's Café (I think it was) after the race, where we chatted with Pymmes Park regulars and volunteers.  I have to say that Pymmes parkrun was the most welcoming parkrun I have visited - if you get a chance to go along do take it.  Great fun, fast, flat course and friendly people.