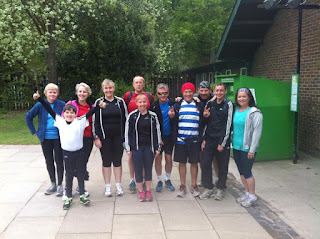 Another Saturday, another parkrun!  Today marked the inaugural running of Queen Elizabeth parkrun just south of Petersfield.  This is about 4 miles further away from home than my regular Basingstoke parkrun, but the A3 is a slightly faster road than the A339 so it took no longer to get there.  I set of with my youngest boy, picked up a friend on the way and we all arrived in good time for the start.

I love an inaugural parkrun as you can guarantee that you'll meet up with people you like and don't get to see often enough as they now run at different parkruns, or you've only met them once or twice 'in real life' but have spent so much time chatting on line that you feel like you have known each other for donkeys' years.  You also get to speak to lots of people who have never been to parkrun before, but more of that later!

It was quite a walk from the car park to the start.  My friend commented that we were lucky it wasn't raining, as we'd have been soaked by the time we got to the start.  We walked up hill to the start.  The first of lots of up hill bits!  Milling around at the start we chatted with people we knew, discussed how hilly this run would be and plotted future parkrun outings.  Kiernan Easton, the event director,  gave an excellent briefing.  He said he was nervous, but it really didn't show.  He thanked all those involved in the set up and all today's volunteers before describing the course.  Apparently it is a net downhill course!

I started near the back, with my boy, and we stayed near the back!  The sharp uphill start spread the field out pretty quickly, but was followed by a lovely long downhill stretch.  As I was running at 9 year old boy pace (and he isn't fast, his PB is 33minutes) I had lots of breath to talk, so talk I did!  Alongside encouraging my 9 year old (shorten you stride, dig in with your toes on the hill, shoulders back, head up, etc. etc.) I chatted with, or maybe at, other runners.  Lots of them were first time parkrunners who were impressed and bemused by the concept in almost equal measure!  The course is beautiful, lots of lovely views and very well marshalled and signposted.  Much of it is on forestry commission hard packed gravel paths with some sections over grass.  Not my favourite running surface, but as I was taking it easy I didn't mind too much.  There is one short lap followed by one longer lap, which meant that it didn't really feel as though one was running laps!  Going up the steep hill for the second time the boy was flagging, as was a Havant parkrunner who was being supported by her friend.  Her friend grabbed one of her hands, my boy grabbed the other and they pulled her up the hill!  Suddenly he could run again, having had a bit of a whinge prior to that point! 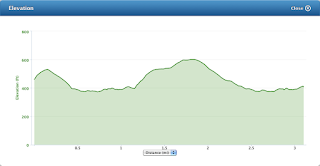 Is it hilly?  Well, yes it is!  Look at the elevation profile!  But it is also very pretty.  My son finished it 6 minutes slower than his PB, but that includes a pretty spectacular tumble as he ran down hill.  The sort of tumble that would have put me in hospital, but he just got up, cried a bit, walked a bit and then carried on running!  He may not be fast, he may not always enjoy running, but he is very determined.  If he is struggling and looking miserable I ask him if he wants to stop, he invariably says no, he wants to finish, so on we plod!  I think he likes the big cheer he gets at the finish. 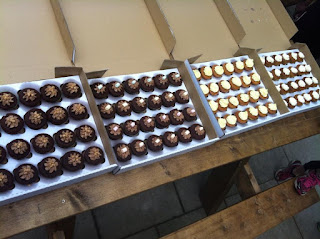 Coffee and a chat is an important part of parkrun for me!  Today we got to sit outside and drink some really lovely coffee.  'Exceptionally good,' as my friend commented.  So good we had to have another cup.  The bacon sandwiches looked pretty good too.  In best parkrun tradition, the event director had organised cakes.  They looked stunning and, I am told, tasted as good as they looked.  I want to know where to get the special cup cake carrying boxes from!

I look forward to coming back to this parkrun in the future and running it without a child.  A bit more hill training might be in order first.  None of the hills are as challenging as my local steep hill, but I run up that one by myself - no one can see if I am running so slowly that it would be faster to walk.  Still, the only way to get good at running hills is to get out there and run up them!