Alton 10, undulating, but a PB course! 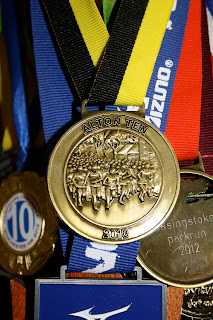 I really didn't want to run a race today.  I wanted to plod along, in my own sweet time, probably giving myself lots of negative self talk about how useless and slow I was.  But I did need to run today, and it is the day of the Alton10.  If I 'just went out for a run' there would be hundreds of other runners on my route anyway.  It is a cheap race to enter, just £10 if you book in advance and have a UK athletics club registration, and ridiculously easy for me to get to.  I always get to races with loads of time to spare.  I hate being late, and worry about missed connections, bad traffic, getting lost etc.  This race, however, was less than a mile from my front door.  I could have a lie in, do some chores, check my emails, sort out snacks for the children to eat in my absence and still have loads of time to arrive and collect my race number couldn't I?  Well, yes, if I'd bothered to put a watch on and check the time!  We'd been advised to collect our race numbers by 9.45am, at 9.35am I was halfway through pegging out my washing on the line!

I quickly grabbed 'everything' I needed, realising too late that I had left my heart rate monitor band 'thingy' at home, along with my lip balm and a sweat band for my wrist.  I had remembered my sunglasses though.  As I jogged through the village the sun was shining down and it was really quite warm.  I was glad to dump my bag and sweatshirt, collect my number and meet up with various running friends.  I thought back to the first time I'd run this race, back in 2010, how intimidated I'd felt by all the club vests and the sinewy legs of serious runners.  I hadn't known a soul there.  My running life has changed dramatically, mainly due to parkrun, now I think I'd be hard pushed to turn up at a race without knowing someone there.  I don't name names on here - but it was great to see everyone.

I had no expectations for this run.  I set off too fast - running the first mile at a 5k pace, a bit silly, but at least I knew that the first hill would slow me down!  As we approached the first water station, while I was chatting with an ex policeman, a parkrun friend sped past me.  Our speed equalised a bit after that, thanks to me throwing caution to the wind on the down hill, and we ran together off and on until about 6 miles where she very graciously said she was going to let me go on.  She called out 'You're running really strongly - keep it up!' as I pulled ahead.  I can't tell you what a boost that was.  I kept that in mind as I slogged up a hill at 7 miles.  I think I chatted all the way around!  I certainly didn't feel as though I was going hell for leather, but I kept worrying that if I kept up the pace I was going at then I was going to blow up at some point.  I didn't.  I carried on overtaking people right up to the last few feet of the race.  My children came out to the end of my road to cheer me on just after the 9 mile marker - lovely to see them.  They took some properly awful photos of me too!

As I crossed the line I think the finishing clock said 1:24:57, the official results are yet to be posted, but even if it is more than that it is a PB (over a minute faster than Paris-Versailles, and two minutes faster than my last Alton10).  I punched the air as I crossed the line and shouted 'P-f*cking-B' and then clamped my hand over my mouth and apologised to the young Scouts who were handing out medals and cups of water (they did an excellent job both at the finish and at the water stations).  I was walking on air!  I bounced around looking for people to talk to.  If I'd been told I had to carry on for another 10 miles I am sure I was so high I could have done it!  As it was, after catching up with a few people, I ran home!

I've been on a bit of a post PB high ever since!  I could hardly wait for Husbando to come home so we could go out for another run.  4.5 miles over part of the same course, at a somewhat slower, but still respectable speed!  It was blooming hot out there this evening.  I have to say the local Scouts did an excellent job - not a sign of a plastic cup at the site of the water station we passed!
Posted by MrsBridgewater at 19:03