Walking with a John Wayne swagger....

Last year's Reading Half Marathon was a PB run for me in really grim weather, this year's run was rather different.  The weather forecast a few days ago said it would be sunny, yesterday we were promised rain, this morning I looked at the window and had no idea what the day would bring.  I got dressed, put, I thought, a pair of shorts in my bag so that I could change into them if I wanted to and set off to pick up a couple of people on the way.

Once again I had signed up for the VIP lounge, one of the major benefits of this is having proper loos, there are also freebies to be had!  Not just snacks, drinks and post race photos and massages but running clothes!  I am currently wearing my free Mizuno hoodie - lovely!  I decided I would be too hot in my long tights, and started to look for my running shorts, they were nowhere to be found.  One of the guys I drove over with had 2 spare pairs with him and said I could borrow a pair.  I don't wear 'flappy shorts' normally, but thought, what the heck - let's give them a whirl! 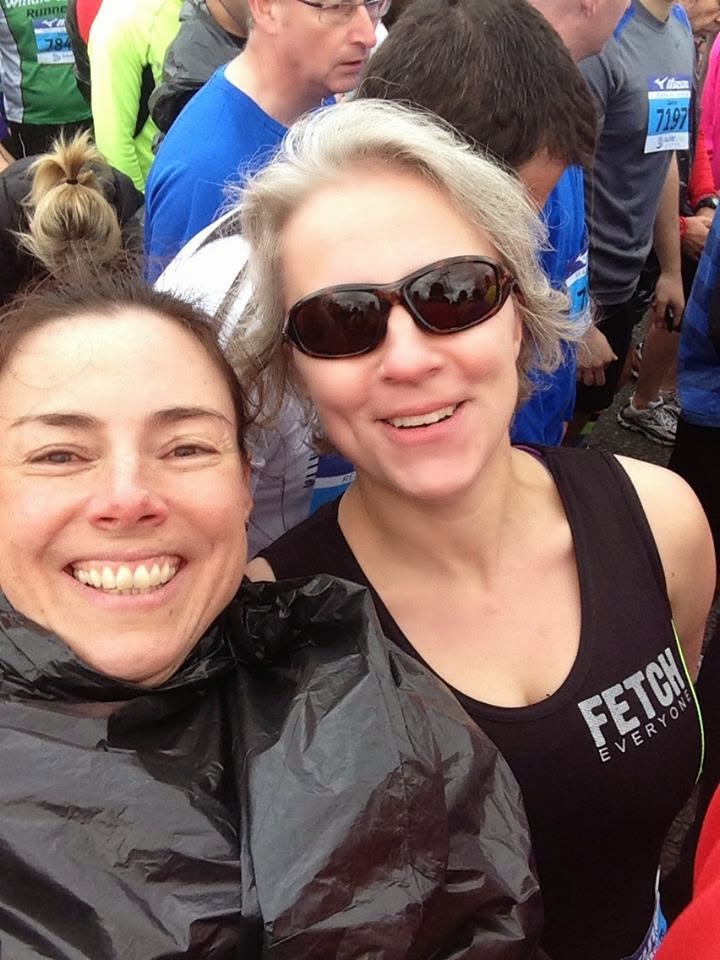 As we walked to the start I heard someone call my name - it was the lovely Ironmum who I'd met at the Bramley 20/10 a couple of weeks ago.  She was sensibly attired in the latest bin bag chic, whereas I was dressed for summer in shades! We ran together for the first 4 miles.  At about 500metres in I realised the shorts were a BIG MISTAKE.  Ironmum pointed out, helpfully, that I had over 12 miles to go!  I was running about 10 paces and then having to yank down the legs of the shorts where they were riding up.  Sadly I don't have a thigh gap - even at my skinniest I have never had one, so the combination of fabric rubbing agains my inner thighs and thighs rubbing against each other was deeply unpleasant.

I told Ironmum that she should run on, which made me a little sad as it was very pleasant to run and chat.  We'd both forgotten about the 'cheeky' hill at 2.5miles, but we'd made good time.  I had discovered however that if I ran at a certain, slightly slower pace, then the shorts didn't ride up quite so much and it wasn't fair to slow my new friend down!

I ran on, slowly, and kept my eyes peeled for people giving out Vaseline.  The blessed sight of a Red Cross man came at about 5 miles (on the University campus).  He offered to help my apply the Vaseline, but I declined.    I found that, so long as I reapplied Vaseline every time I saw someone with it by the side of the road it was just about bearable.  I settled into a comfortable pace, nothing that would set the World on fire but one that I could maintain comfortably.

The hill at 7 miles was less arduous than I remembered, probably because I wasn't going all out for a fast time.  The support was amazing.  The only stretch to the lack in support was the A33 back towards the Madjeski Stadium at about 11 miles.  This was a desolate road to run along, made even more miserable by a strong headwind.  It seems to take forever to get back to the Stadium where the race ends, including an out and back which at least had the advantage of being able to spot runners I knew and shout out to them.

At long last I passed the '1000m to go' sign.  It seemed an awful lot further than 1km, but eventually we were in the stadium and the finish was in sight.  This race was so crowded that even approaching the finish I was dodging around runners to try to get a clear line to the finish.   I crossed the line in 2hrs 02 mins and 21 seconds (10 minutes slower than last year).  Not a great time, but nice even splits and a pace that I could maintain for longer if necessary.

I saw Ironmum after the race - she'd had a much better run than me, and we shuffled through the throngs of runners to get our space blankets, medals and goodie bags before going our separate ways.  I went back to the VIP suite and met up with my friends before making our way back to the car before driving home.  I think it took us longer to get out of Reading and drive home than it had to run the race!

I am walking with a bit of a swagger now.  But the advantage of running slower is that I don't have any of the normal post race stiffness or aches and pains.  Thanks to all my friends for their support and encouragement - I'm sure we'll do it all again sometime soon!
Posted by MrsBridgewater at 23:07