He, who would valiant be... 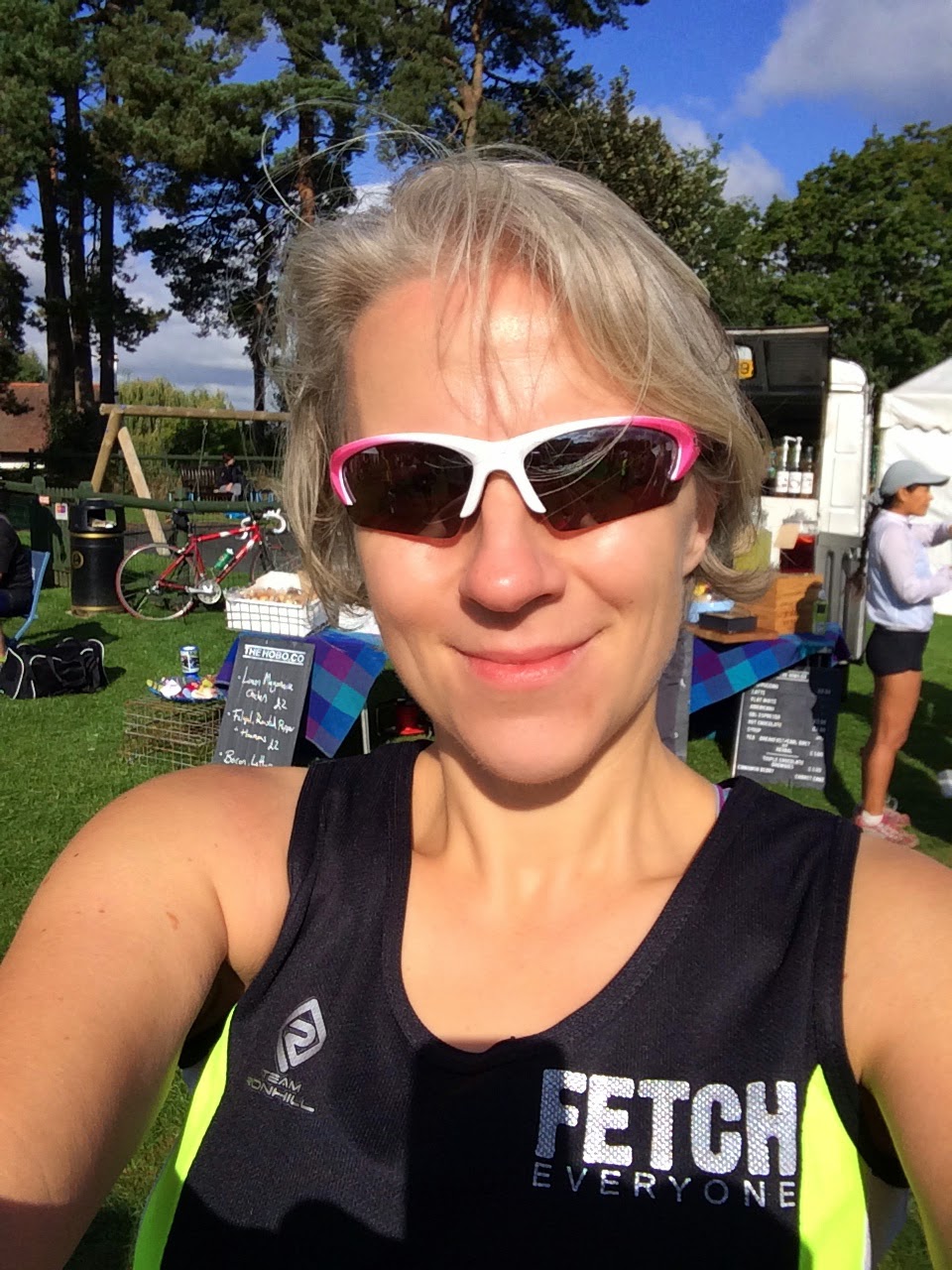 I am not entirely sure how I ended up entering this event again.    Indeed, if look at my blog from last year,  I find I am at pretty much the same stage in this year, new job - great but still in the rabbit in the headlights stage, tired, losing my voice etc.  At least I'm not training for an imminent marathon.  I think that I entered because I decided to do the Giant's Head Marathon next year and thought I'd need to get some trail experience.  I'm only doing the Giant's Head for the medal (go on, have a look, you know you want to!)  26.2 miles on trail is a long way for a confirmed road runner so today I was only taking on the half.
The weather was fantastic.  I'd obviously misread the weather forecast as I'd thought the sunny, warm weather was over, but the sun was shining and clouds were scudding by as we waited for the start.  We got their early enough to see the full marathon runners off, and I caught up with friends.  I have since discovered, via Facebook, that there were several other people I know there and I am sorry to have missed them.  As they set off they were told to 'watch out for tyre girl' who had set out early for the marathon pulling a tyre behind her.  I prefer to carry my tyre around my middle!  As we had time we had lovely coffee from at the back of a Citroen van.  This of course meant a queue of the loos! 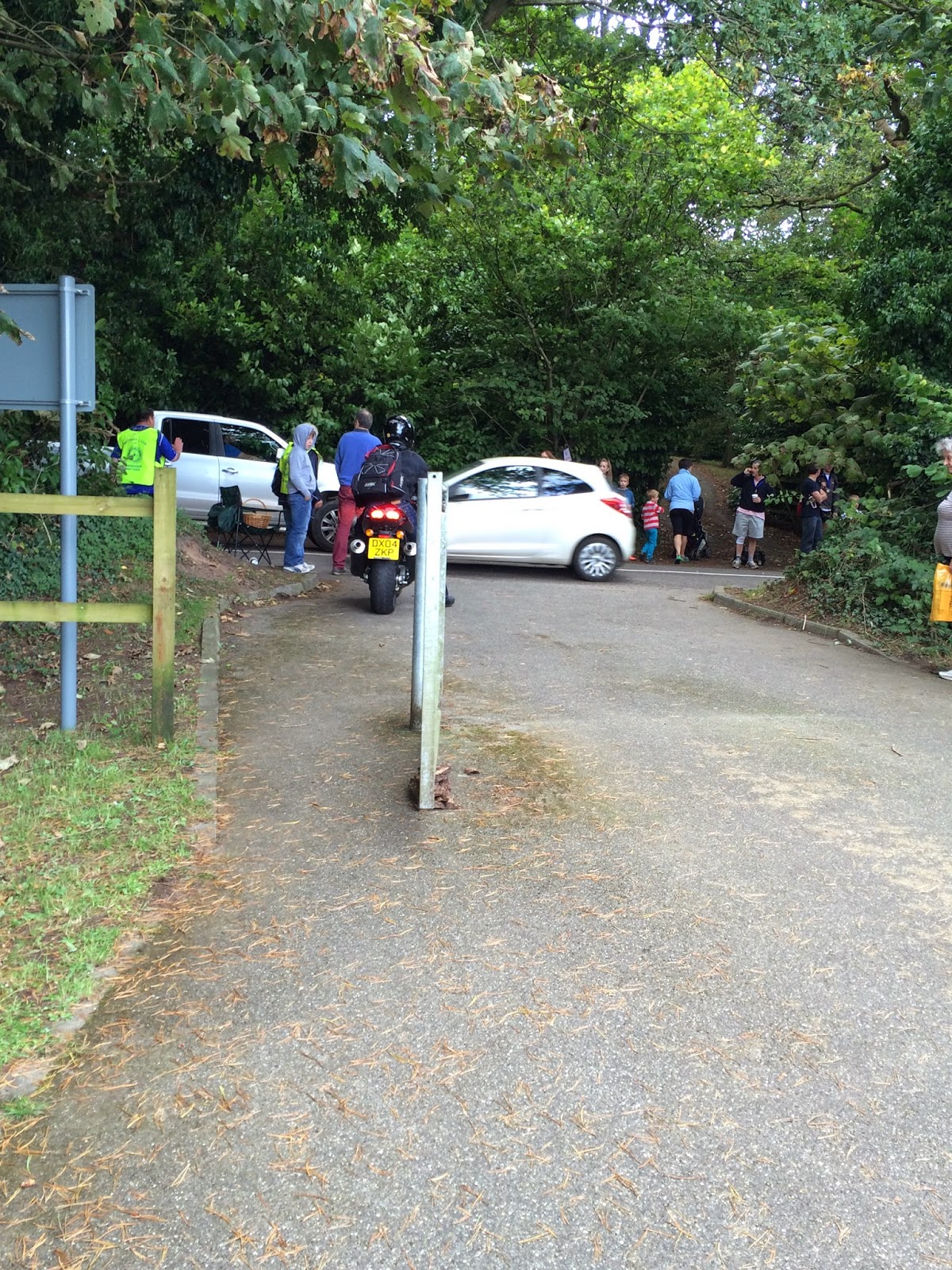 Soon we were off, having just managed to get to the end of the loo queue and back to the start line in time to sort out  my Garmin.  As we left the start area we passed through the open gate, and my race almost ended there.  I was chatting to a fellow runner and did not see the thin, grey end of the gate pointing towards me (see photo).  I hit it hard with my left shoulder!  It wasn't marked and with loads of people all around it was not easy to spot.  Still, onwards and briefly downwards I went.  Running on the road was easy, nice and wide, easy to pass people.  I'd decided to just see how I felt and not force the pace as I have another race next weekend (and the weekend after).  Which idiot enters 4 races in the first 5 weeks of a new job, with one of them being in another country?  So I pootled along, chatting with people I knew, people I'd never met before.  I made a huge effort to catch up with one lady who I thought was someone I knew only to find she was a total stranger!  I caught up with someone I know from CPRC briefly and was introduced to his running companion.  Only in England would one turn and shake hands with someone one was introduced to while running a race!

Once off the road it got a bit more serious.  The paths were narrow in places which resulted in having to walk for some sections and during other sections I just concentrated on keeping up with the person in front.  The hills were as sapping as last year, but I think that the weight loss has helped as I recovered much faster.  Not that you could speed down lots of the hills as they were steep and, well, trailey!  I stopped completely to check on two runners who fell spectacularly!  My automatic reaction to stopping running was to stop my Garmin, luckily I didn't stop it for long and the runners were both OK.  The highest point of the run offered absolutely stunning views, I'd say they were breathtaking, but I didn't have much breath left to take!  There was less haze this year and I could see much further.  If I can work out where it was I would love to go back and spend some time there. 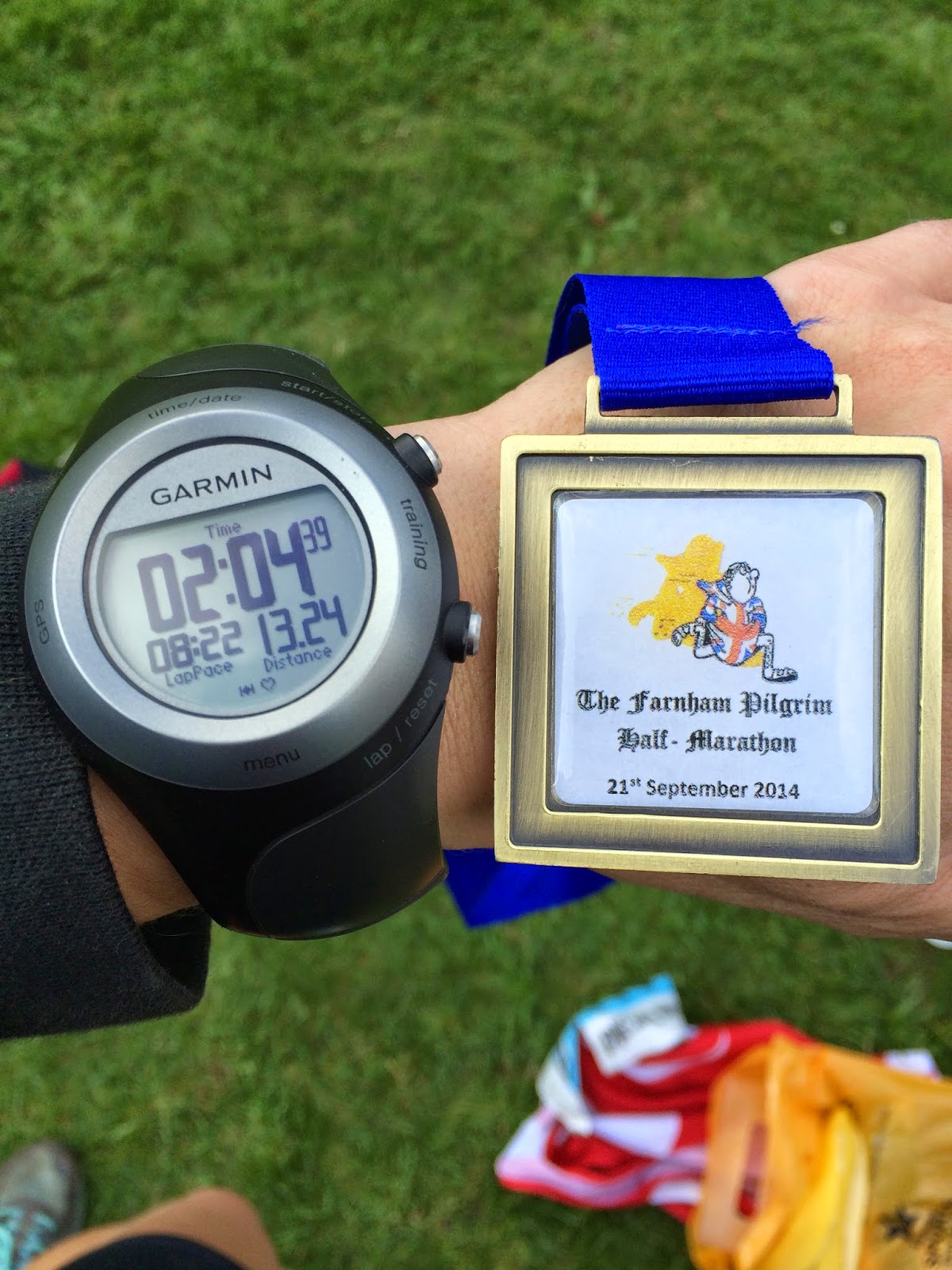 The water stations were well placed, just when I thought I was too thirsty (it was warmer than I'd anticipated) a water station appeared!  The marshals were friendly and cheerful.  I think I managed to thank most of them as I plodded past.  At one point, in the last couple of miles, I overtook someone and realised that I couldn't see anyone ahead of me.  I panicked a bit and called over my shoulder 'Are we going the right way?' and sped up so that I had someone in view.  Soon we were back on the road.  Running past the golf course and up hill to the gate to the field.  I spotted a man in a purple shirt who had passed me way back at mile 4 (in Puttenham).  I caught him up, overtaking several people in the process.  Then I carried on overtaking people as I knew that the finish beckoned.  At one point I overtook a car - shouting 'I'm faster than a car!'  Then it was round the corner and down the hill to the finish.  I heard my name called and I think I waved - but I was intent on catching just one more person.  I threw myself over the line and heard my number and name over the tannoy - a nice touch that.  I'd done it!  And 11 minutes faster than last year!
The CPRC guys I'd caught up with briefly had finished ahead of me (it was they who had shouted as I came in), so I went to join them.  Apparently they didn't realise I was so fast.  I said I wasn't really, more a case of being too stubborn to give it!

As I waited for my friend to come in I collected my medal and my tech t-shirt.  Then I totally messed up sorting out my 'phone to take a photo of her as she sprinted to the finish!  Sorry!   After that we went for lunch!  Steak frites and a glass of wine.  Lovely.

So, how many trail races will I have to do before I feel the love?  This was a very well organised event, the views were stunning, there was plenty of cake for afterwards (I was good and did not partake), and I am very glad I did it.  But to say I enjoyed it would be an overstatement!