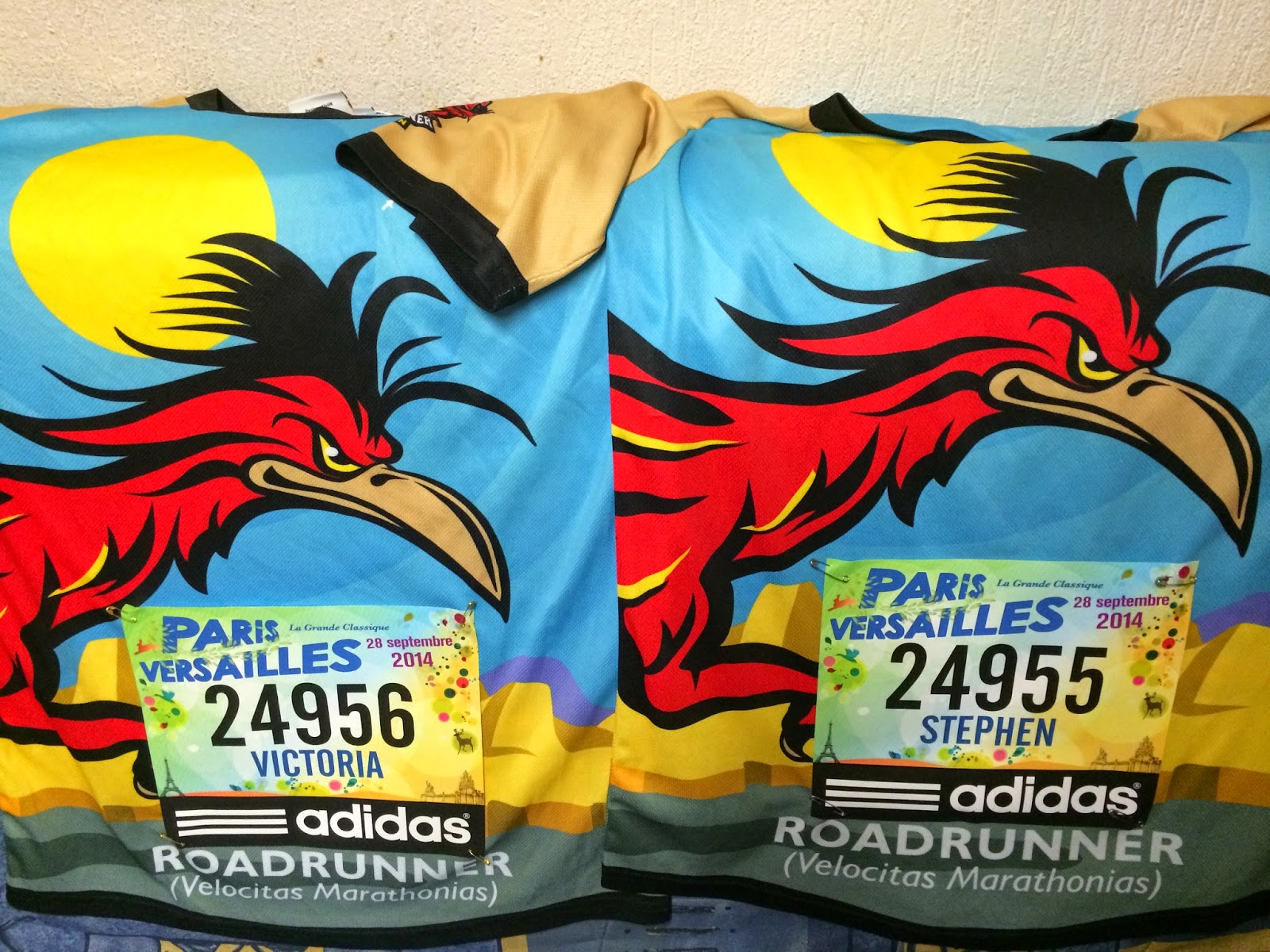 I'm not enjoying getting old!  My memory is playing tricks on me!  I was sure I'd last run Paris-Versailles in 2012 - I was so sure that I spent ages trying to look for my time in the 2012 results listing (tricky anyway on a mobile 'phone!)  I knew it was 1hr 26 mins and some change, and I also  knew I wasn't anywhere near fit enough to come close to that time at the moment.  When I ran that time, in 2011 it turns out, I was running really well!  I got PBs at every distance I ran that year.  I think the fact that I only started working at the beginning of September that year may have had something to do with me being more focussed on training! 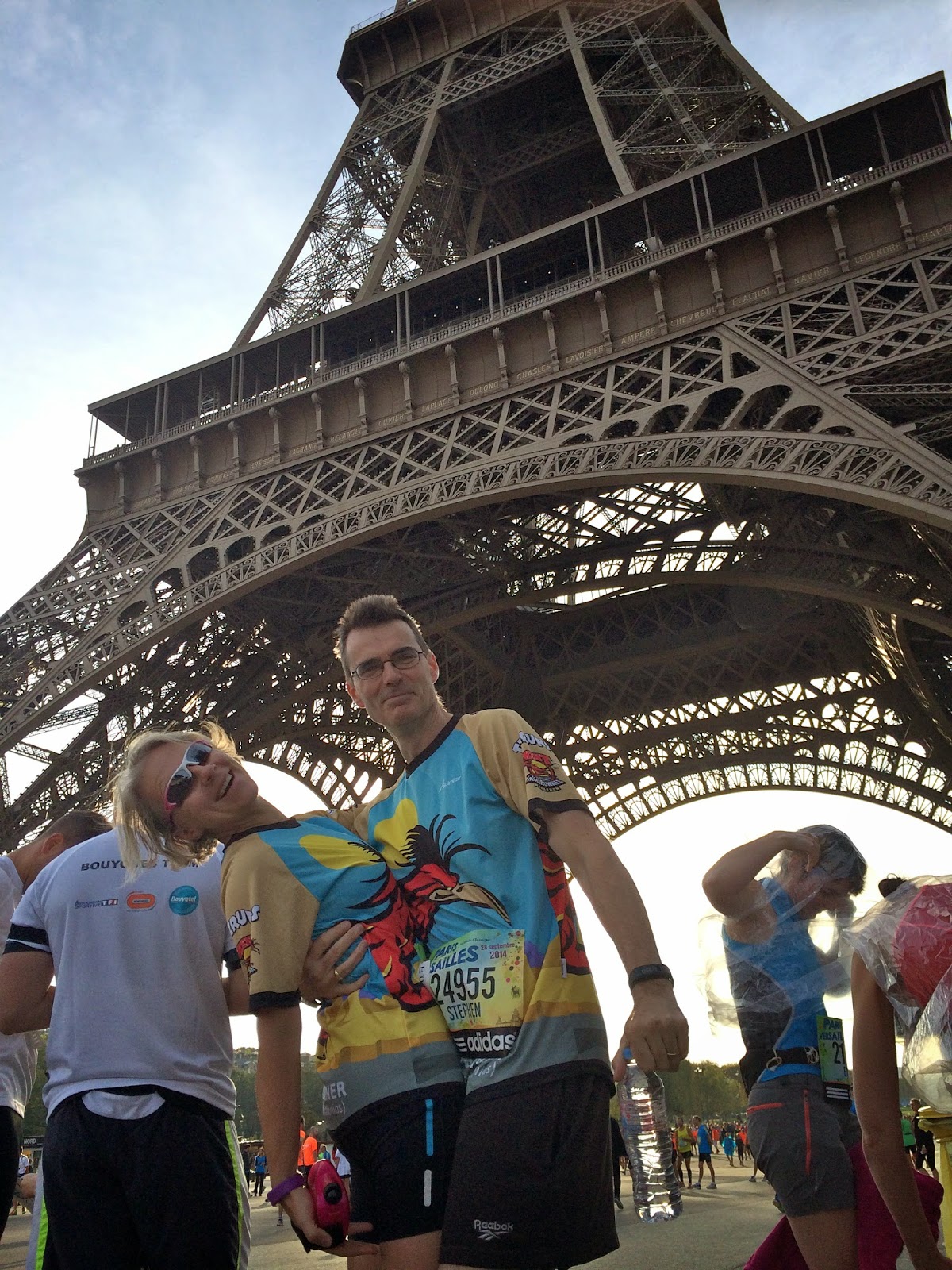 So, after a longer break than I remembered we were going back to Paris for the race with that hill!  We travelled to Paris on Saturday morning, arriving with plenty of time to pick up our race numbers and look at the stalls at the expo.  I was beginning to have doubts about my choice of running kit.  It was really warm in Paris and I had brought a t shirt to run in.  I had a look at the clothing on offer, and while it was possibly to buy obscenely short running shorts there was not one single running vest on offer because they were all showing off their autumn and winter stock.  So I would be wearing my lovely Kent Roadrunner top, as would Husbando!    Neil, who were were staying with and who had hoped to run with me in 2011 but ended up running by himself in 2013, was running with us - he had to make do with the rather nice, but much more subdued, official adidas race shirt!  My KRR top was admired by a French lady - who informed me that I must be American because I was wearing 'such a shirt.'  No amount of denial by me would convince her that I was English! 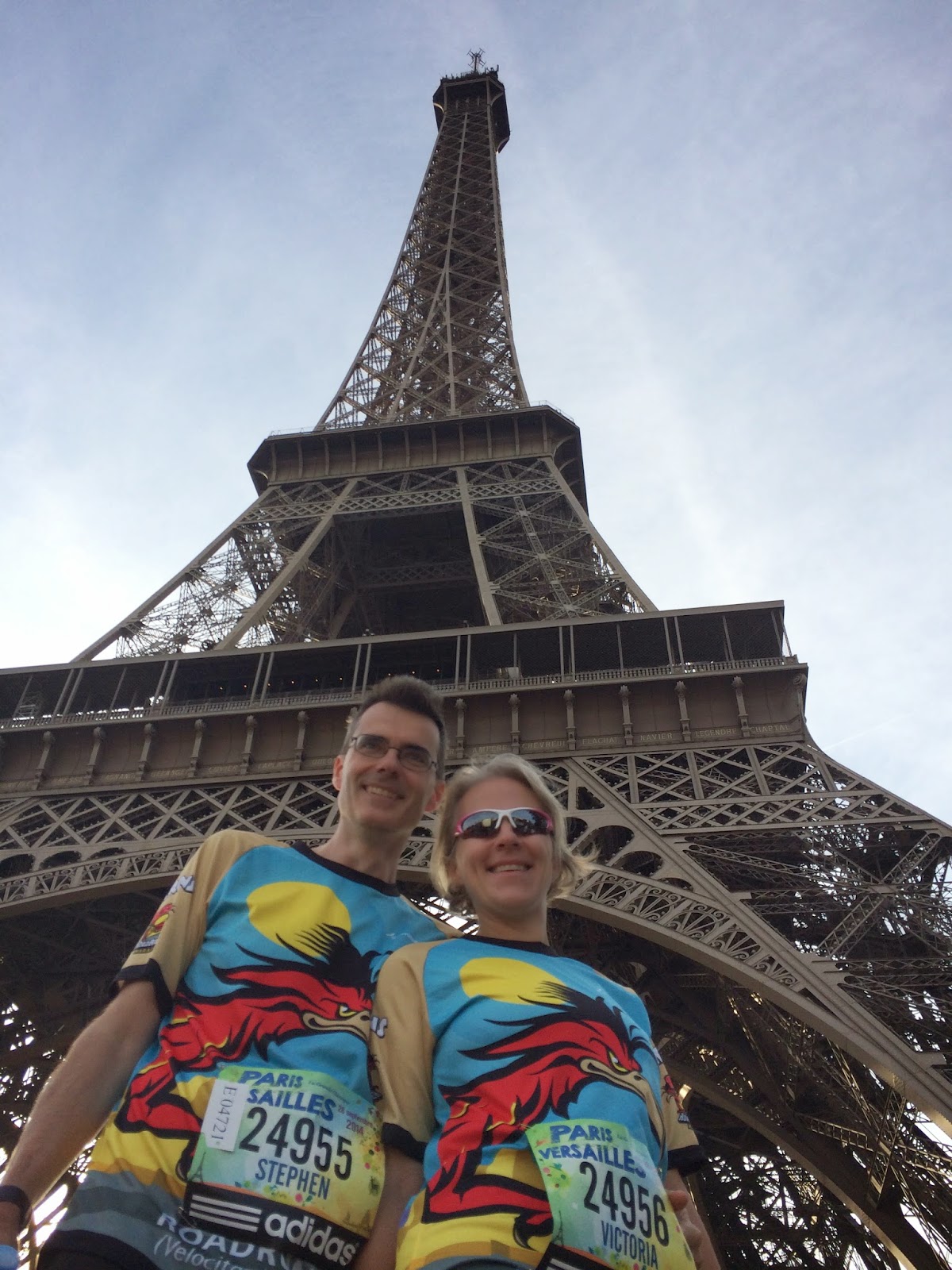 Race morning dawned bright and sunny, we had breakfast, got our stuff sorted out and headed for the station to get the train to central Paris.  In contrast to 2011 my mood was good - we chatted and laughed and talked about our goals.  Neil wanted to do better than last time, Husbando was planning to run with me, and was hoping we could run sub 1hr 30.  My A goal was sub 1hr 30, my B goal was getting round in one piece.  We were joined by a growing throng of runners - always reassuring to know that we were going in the right direction.  At Champ de Mars I sent the boys off to check the bags while I queued for one of those 'tardis loos' - the ones that self clean between each user.  I reckoned that, by the time I got to the end of the queue I might need a wee!  From there we made our way towards the start and took some photos with a famous Paris landmark in the background. 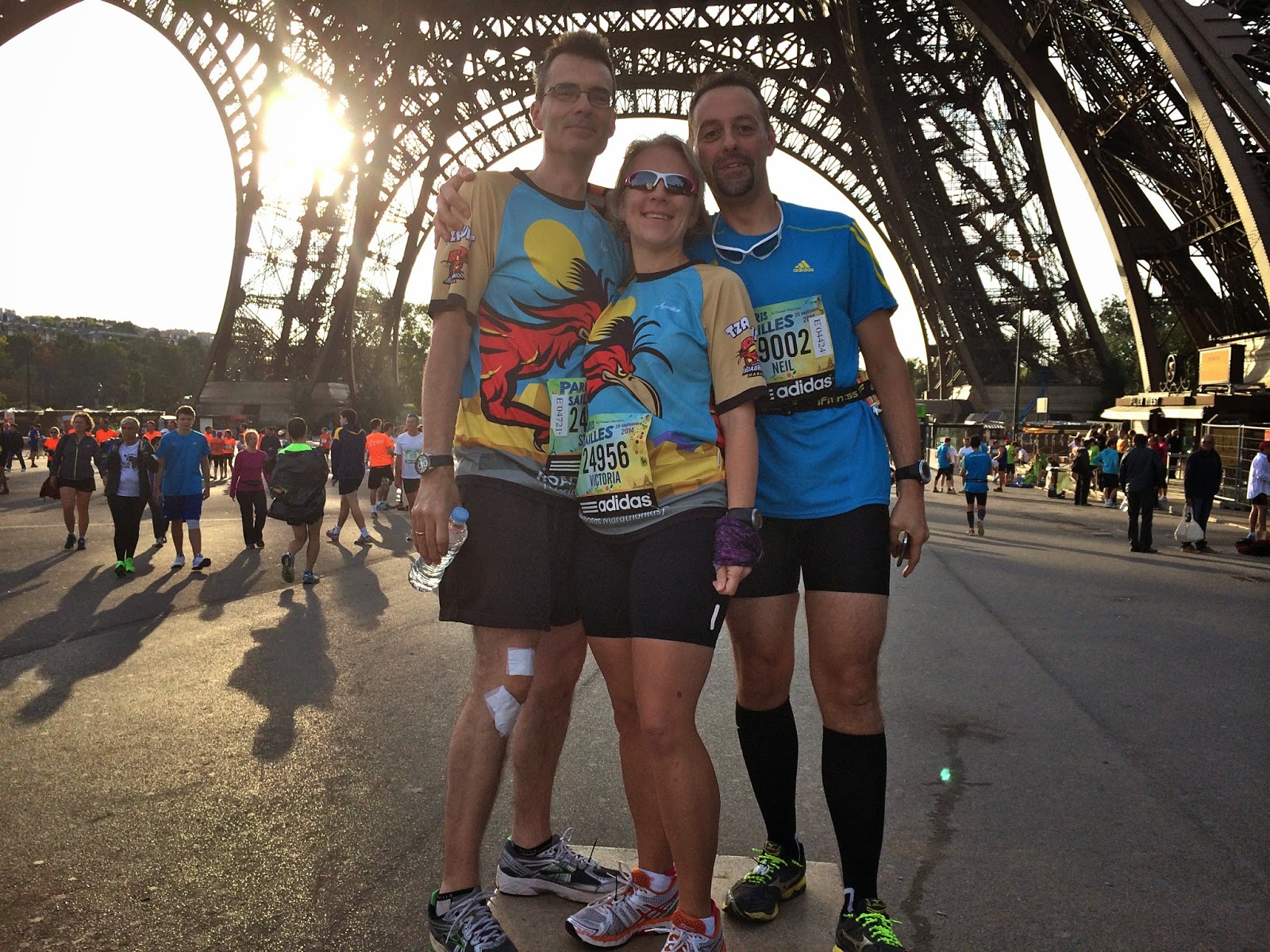 There are no starting pens at this race, and with 25,000 entrants we thought we ought to make our way to the start areas where runners were gathering.  There was a constant commentary from the, very loud, PA system.  I understood about 60% of what he was saying.  I didn't think we were too far back from the start.  We tried to chat over the PA, and ignored the nonsensical warm up ("Jump up and down on the spot to raise your heart rate").  I was struck by the number of runners who were kitted out as though they were about to embark on an ultra.  Whilst a 10 mile race might be a good time to try out kit that you are considering using on a much longer race I don't think that it is possible that all the people we saw with Camelbaks were ultra runners, and nearly every other runner was wearing a race belt stacked with enough gel packs to feed an army.  One bloke had 12 gel sachets (yes, I am that sad, I did count them!)  TWELVE!  That is more than one per mile!  I can't imagine eating that much gel without wanting to throw up at some point. 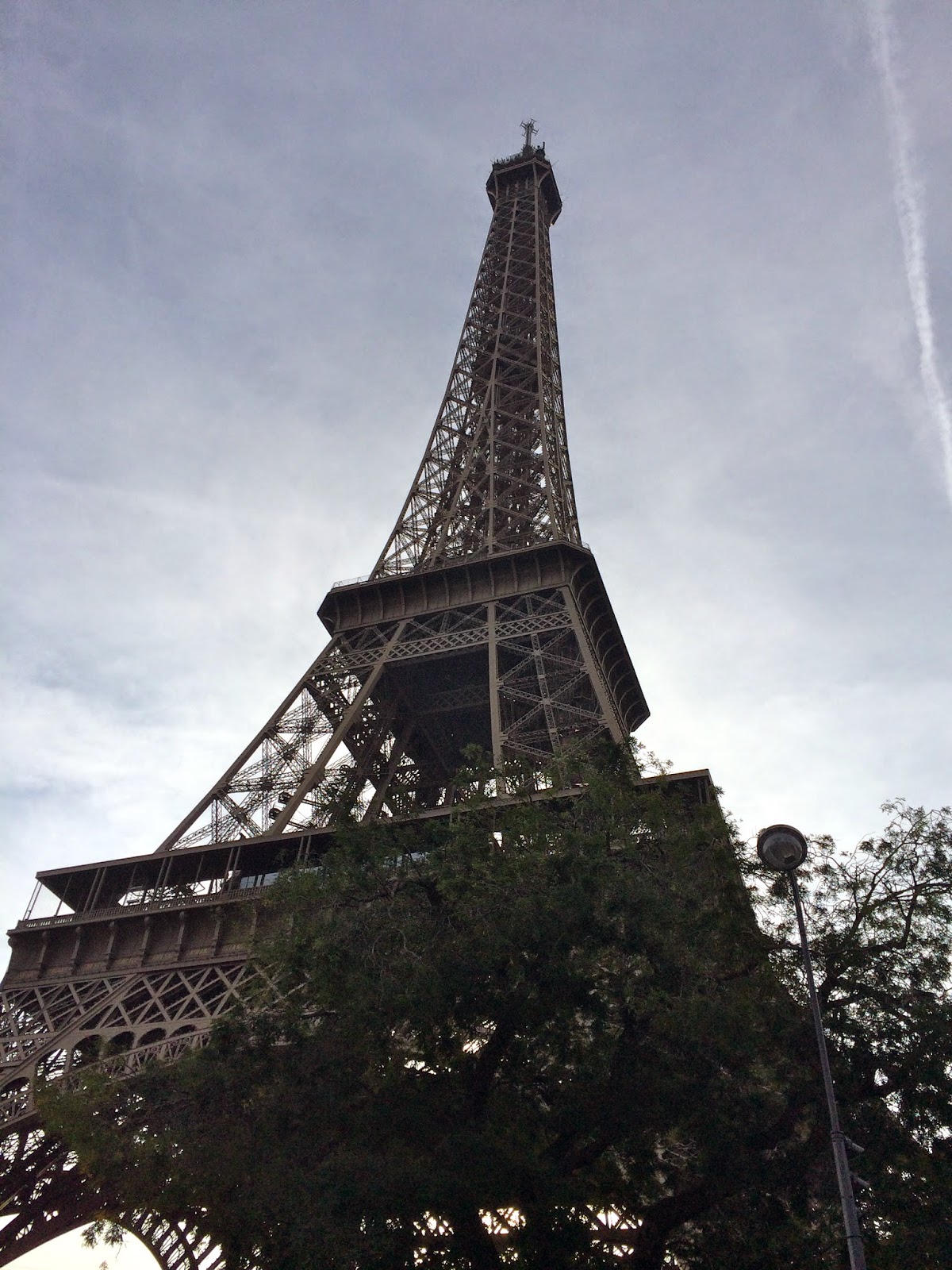 At 10.00am the elite runners went off, followed by waves of us mere mortals going off at 1 minute intervals.  We crossed the line at 10.17!  The first male was nearly half way through his race by then (he finished in 47mins 42 seconds).  While I was waiting I looked up and took a photo of the Eiffel Tower - I note that I took an almost identical photo last time I was here.  We were the last to be allowed through in our wave - Husbando had to say, in his best school boy French, that I was his wife in order to be allowed in.  We crossed the line and suddenly all my nerves and uncertainties faded away, I forgot my niggling sore throat and remembered why I was here.  I love to run!  I really just do.  Off I went with a huge smile on my face.  I knew I was going too fast but I didn't care!  I knew that I'd slow down later, but it felt fantastic to be moving!

Husbando had been talking about a wee stop from before the start - the queues had been to long before the start, so he joined a row of men peeing against a wall before we got the the first kilometre marker.  I carried on.  It was crowded and I had to constantly change direction to plot my way through.  Husbando caught me up at about 3k in.  It is very flat for this section, but in the back of my mind I knew that the hill was coming! 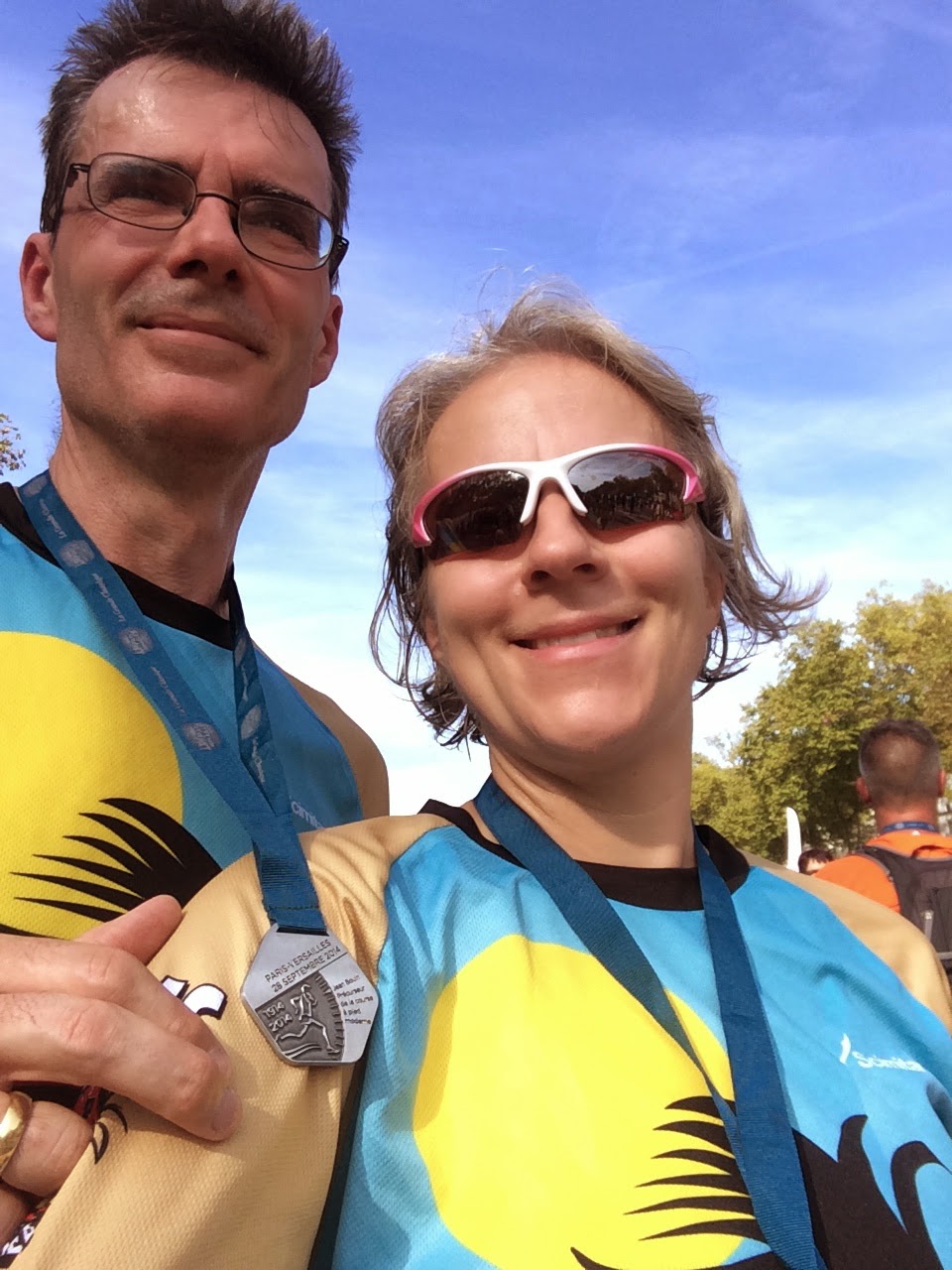 The hill came.  Husbando is much better at hills than I am, I told him to go on ahead - as to be honest the thought of him stopping every so often to wait for me to catch up was very depressing.  I plodded on.  The hill isn't hugely steep but it is very long.  At several points you think you much be at the top, but you aren't - there is more, and some of it is on cobbles.  I may have been slow, but I kept going and was even overtaking people.  A new addition to the signage this year was one saying that we were at the highest point of the run.  Lovely, there was still another uphill section that I could recall, but for now it was time to recover, get my breath back, get my legs moving again and fly down hill.

It was never easy going.  There were so many slow runners in the 16 start waves ahead of me that it was a constant case of weaving in and out.  There was a distinct lack of running etiquette - no moving to one side before slowing down, people just stopped in the middle of the road!  And faster runners used their elbows to warn that they were approaching!  The water stations, however, were well placed and the volunteers cheerful and friendly.

At around 14km I had a real conversation, in French, with some fellow runners.  There was one of those traffic signs that calculates the speed of approaching vehicles and it was picking up the speed of the runners.  It was fluctuating between 9, 10 and 11kph,  I announced that I wanted to get it to 12 - and with lots of cheers and encouragement from those around me I did it!  A much needed burst of speed! 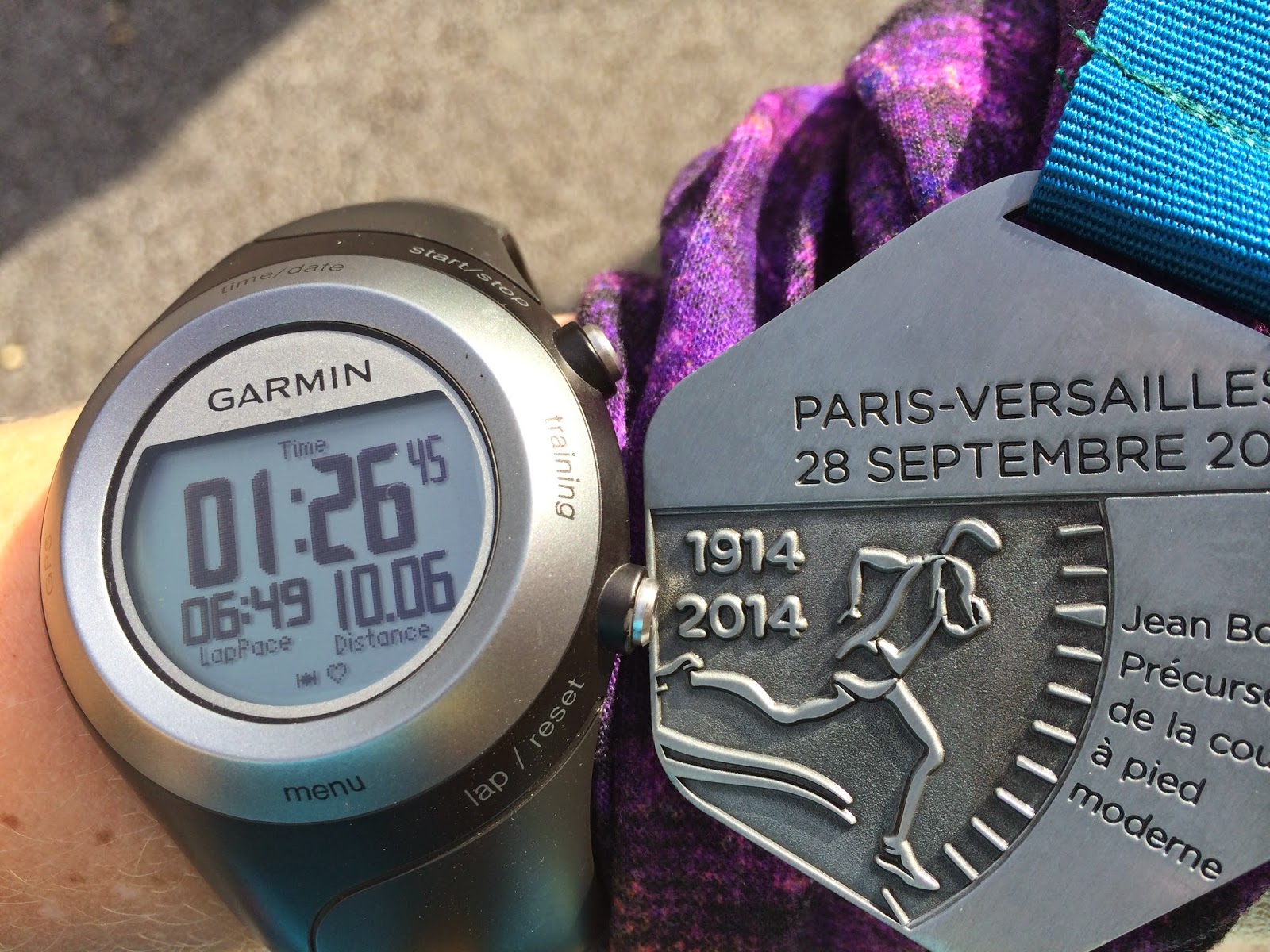 Soon I was approaching Versailles along the Avenue de Paris, looking left and right to see if Husbando was watching.  I knew I had my sub 1:30 in the bag, so now I was just seeing how fast I could get to the end.  I crossed the line, stopped my Garmin, and saw Husbando waiting for me.  I'd run 1:26:41 - I was amazed.  Was it a PB?  It would be close…. Checking my records I found I had missed a PB by 20 seconds.  Which is gutting, but there are positives to be drawn.

When I do this race again I will get there earlier and hopefully get a clearer run.  When I ran my 10m  PB there in 2011 I was having an amazing year, this year has been a bit naff really and I don't feel anywhere near as fit as I did then - so hopefully I can take a few more seconds off my time.   And above all, we had a great time.  We spent time with friends, we ran in the sunshine and collected a medal.  What more could one ask for? 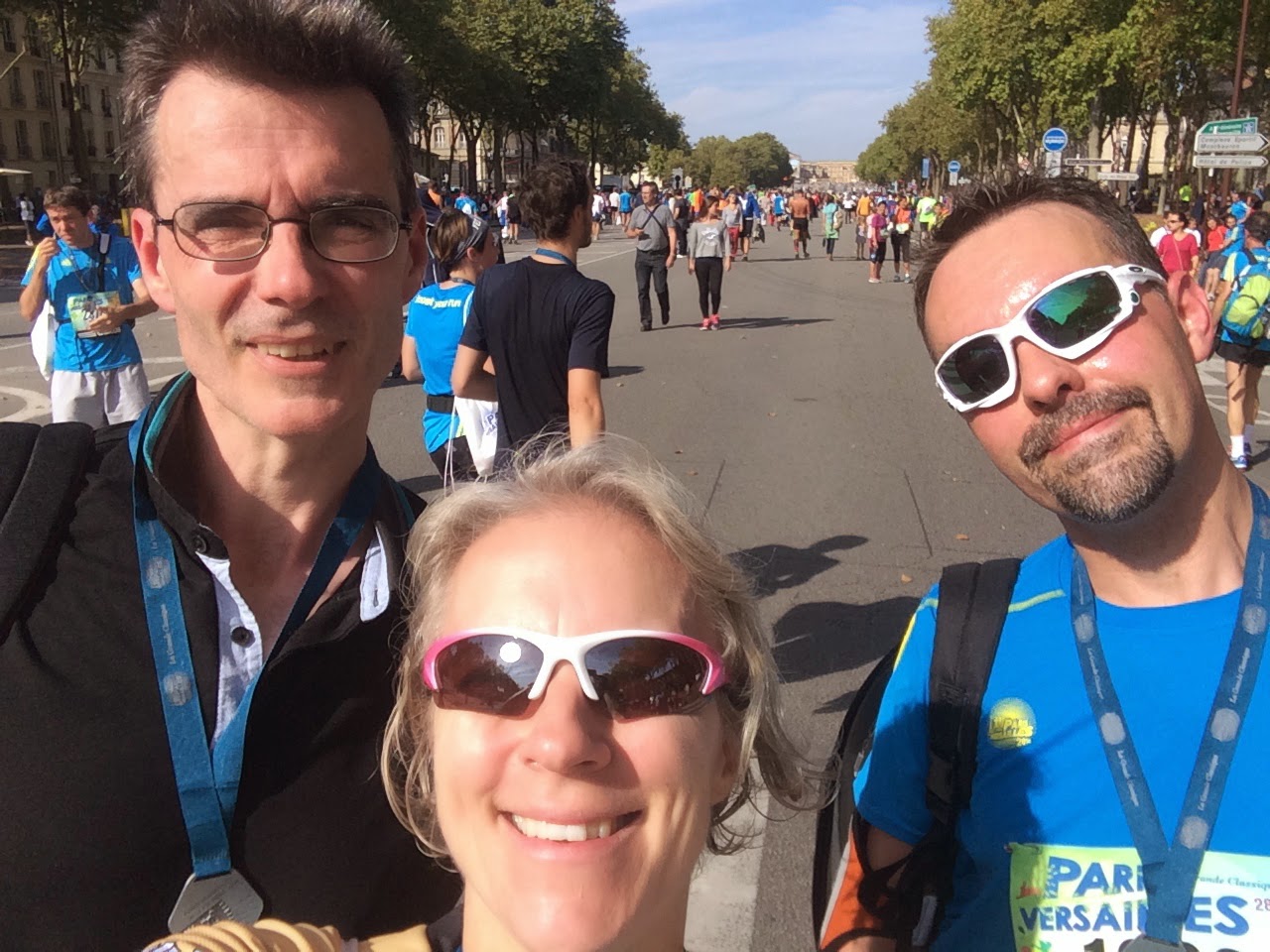