A lovely day for a half marathon.

There were several half marathons I could have run this  morning, including the, very local  and easy to get to,  Basingstoke Half Marathon.  I've never run the Basingstoke Half as it has always coincided with another race that I have wanted to run, some years it has been Paris to Versailles, other years it has been the Royal Parks Half Marathon, and that was the case, as far as I was concerned, this year.  Indeed I remembered way back when the ballot for the Royal Parks Half opened saying 'If I don't get a ballot place this year, I won't use a UNICEF place, I'll run Basingstoke instead.' And that was that.  As it was I got a ballot place and thought no more about it. 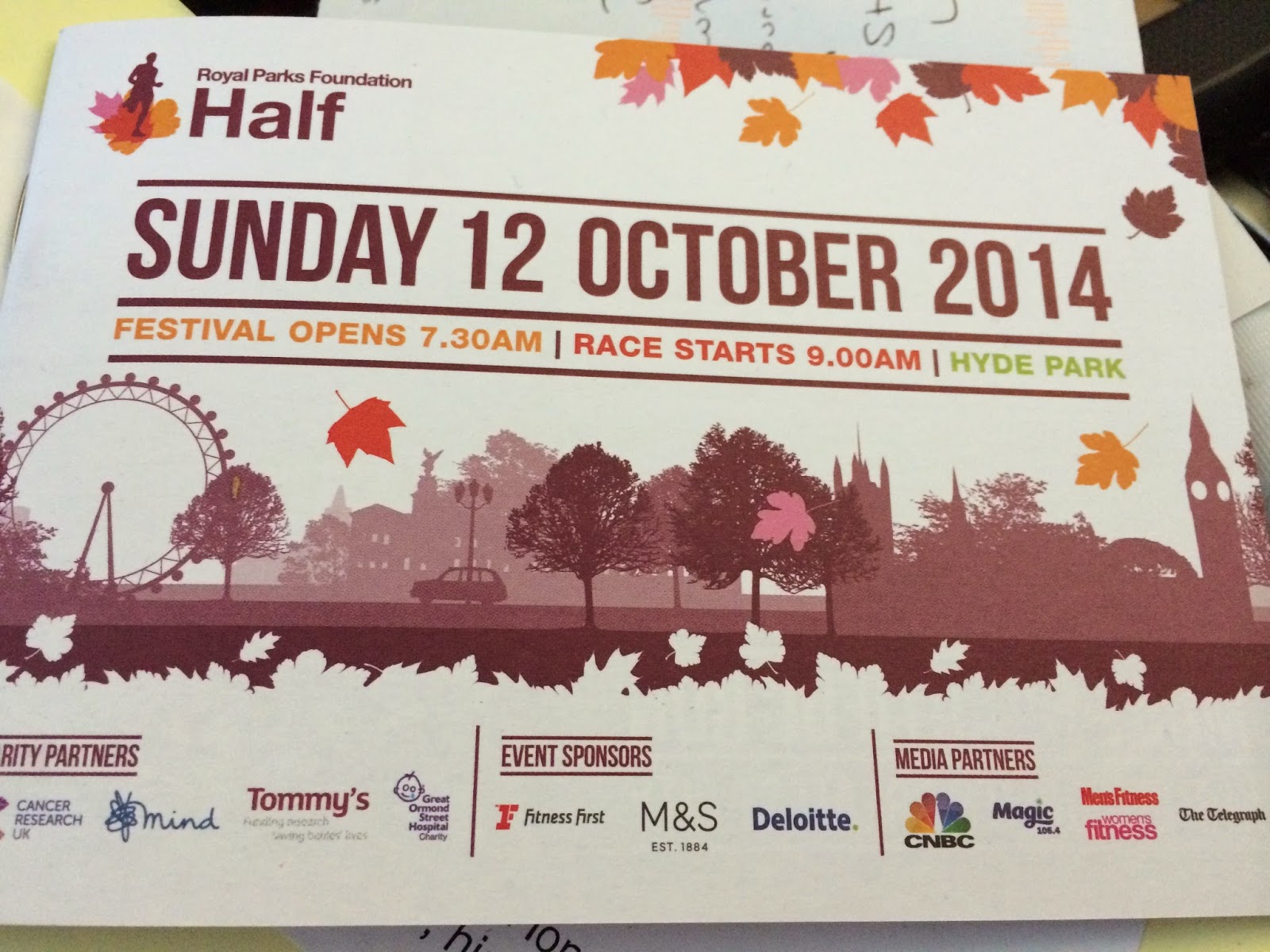 Given that we live in commuter land, just over an hour from Waterloo, you'd think getting to London for a 9am race on a Sunday would be a piece of cake, wouldn't you?  You'd be wrong.  The only way I could do it was to get a train from a station 40 minutes away, which left at 7am.  I do not like being late or even rushing a bit to make sure I am on time, so this meant that the wonderful Husbando had to leave the house at 6am to drive me to the station.  The station was freezing, but the coffee shop opened and a hot cup of coffee soon warmed me up.  Lots of lycra clad people started to fill up the platform, most of them (in retrospect pretty much all of them) had bikes with them.  Amongst them was a friend of mine, so we boarded the train together and chatted as we made our way to  the big city!
We parted at Waterloo, and I went down to the Underground.  Despite the early hour of the train I was cutting it fine to get to the race village, but I was somewhat surprised not to see other runners on the tube with me.  On getting out at Hyde Park Corner I actually began to panic that I was really late and that everyone else was on the start line.  It was so quiet….. then I realised that it was too quiet.  There was no rave village, there was no starting area, there were no runners, no spectators.  Just a few, lone runners enjoying the early morning sunshine.  I got out my 'phone and googled…

I may hate being late, and have a bit of a reputation for getting everywhere too early, but I have excelled myself this time. I was a whole week too early!  I made my way back to Waterloo, pondering what to do.  I decided to go for a run anyway, and left my race bag at left luggage on the station and set out for a steady 10 miles along the Thames.  Having started off heading West, I remembered that I wanted to look at the poppies at the Tower of London, so crossed a bridge and turned back to run East. It was a wee bit later than when I normally run in London, and there were far more people around, but it was fun.  The poppies were glorious, well worth a trip up to London! 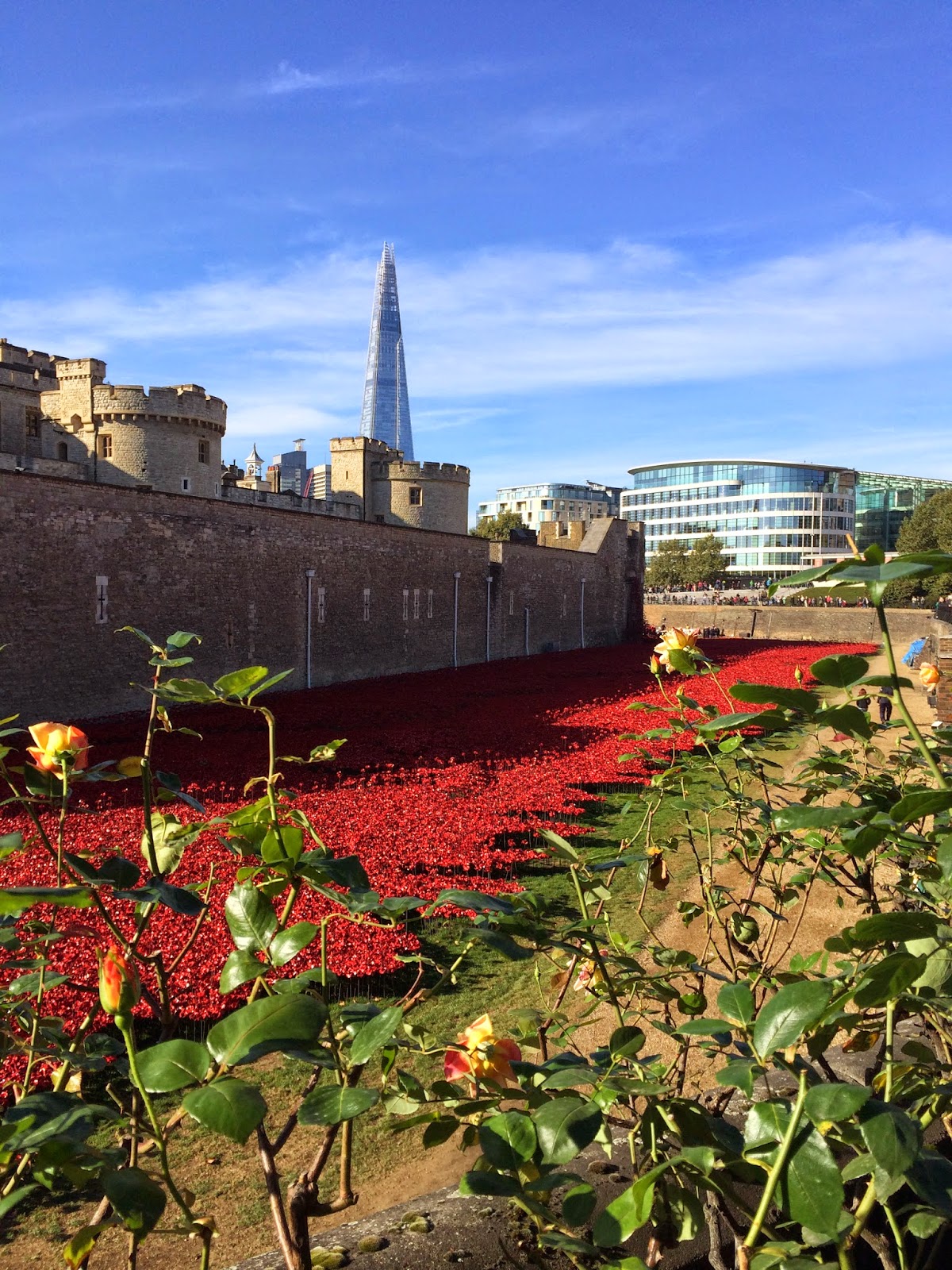 Looking on the bright side, as one has to, better a week early than a week late, at least I didn't make this mistake with an overseas race and I won't need to get the train up to London next Sunday as Husbando is driving up to the book fair to exhibit his wares - I can snooze in the car and arrive early enough to eat breakfast before I go to the race.  I ate too early this morning and was getting very hungry towards the end of my run, so a later breakfast may well be in order next week.   My race bag is packed and ready to go, so there should be no problem finding things at the last minute.  All I have to do is decide on my race strategy.  I ran Paris to Versailles at an average pace of 8.38min/mile, which included lots of running around slower runners and that hill.  My half marathon PB saw me running with an average pace of 8.33min/mile, so I'd need to hit a pace of 8.30min/mile in order to ensure I get a PB.  Realistically I would have to aim for a slightly faster pace than that as an insurance policy against Garmin error.  Can I do it?  I don't know.  Will I go for it?  Yes, I think I will.