A walk in the park. 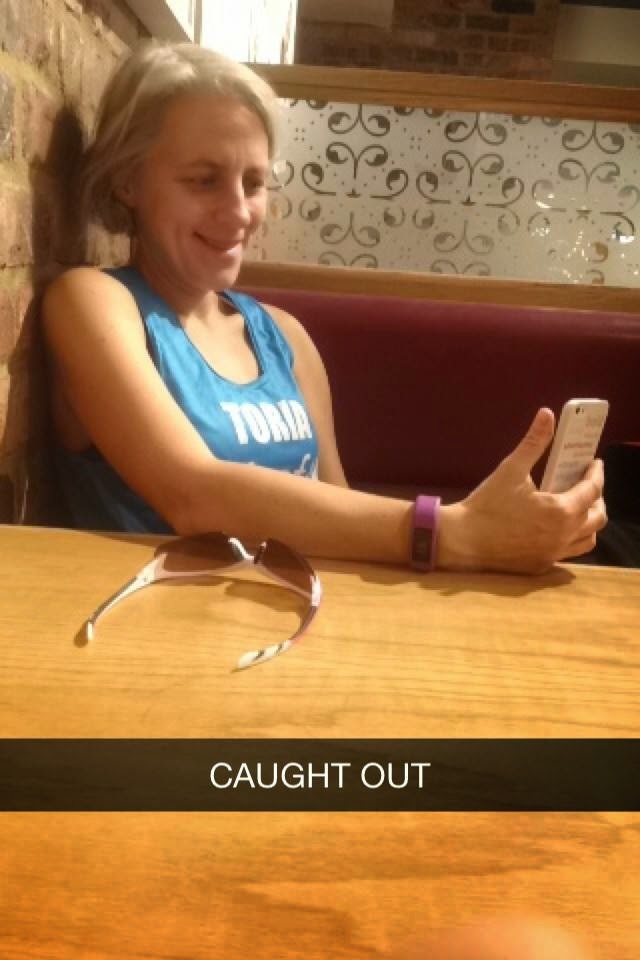 Up early again this morning for the journey to London, I have to say that getting up for work at 5.45am is going to be something a lie in tomorrow!  After last Sunday's trip to the marathon that wasn't I had double checked all the race documentation and then checked again.  Because Husbando was going to a book fair all I had to do was snooze in the passenger seat, it also meant that we arrived in London in time to have a second breakfast and I got to practice trying to look cool and relaxed trying to take a selfie.  I am not much good at taking selfies but my darling daughter caught me trying!

On the tube from Russell Square to Knightsbridge I marvelled at how I could possibly have been daft enough to have made a similar journey last weekend and not realised much sooner that I had the wrong date.  It was standing room only, and ram packed with runners.  I chatted with a runner about to embark on her first half marathon and to another runner who was taking part in the Ultra.  The race village is huge - as it incorporates a food festival as well as all the charity marquees.  The weather was better than had been forecast, so I decided to drop my bag off at the bag check and threw on an old tshirt to keep out the chill.  It was almost up to the job.  With time to kill, and not seeing anyone around that I recognised, I made my way to the UNICEF stand.  UNICEF are amazingly supportive of their runners and I was thrilled to be able to support them by running on a ballot place rather than using a charity place this year.

Last night Husbando and I were talking about Paris-Versailles and what I should aim to do today.  I knew that the hill had been my downfall in Paris, but the Royal Parks Half is (almost) as flat as a pancake.  I knew I wanted to try for a PB (set in March 2013 at Reading: 1hr 52mins 19seconds).  Husbando had some daft notion that I should go for 1hr 45 mins.  Bonkers.  That would require me to run at 8min/mile pace ALL THE WAY!  Bonkers.  I stood, shivering in the starting area and decided with about 30 seconds to go that yes, I was desperate for a wee.  I knew that this was highly improbably - being as I'd availed myself of the lovely portaloos only a few minutes earlier - but the idea took hold and reasserted itself every time I saw a 'Toilets ahead' sign for the next 13.1 miles! 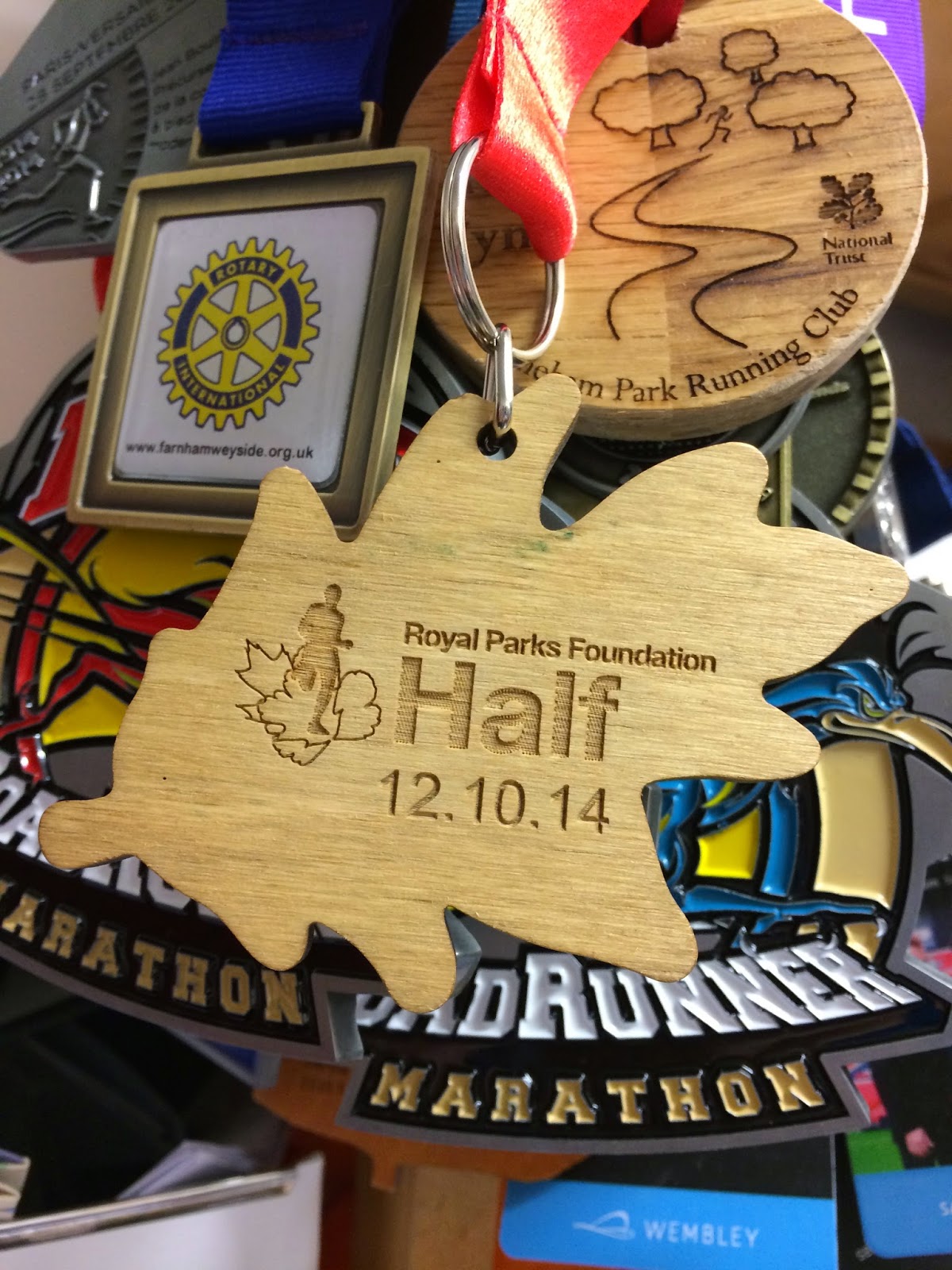 There were two pace runners running 1hr 50mins - I started near the one furthest back and my race plan was nothing more sophisticated than staying ahead of the pace runners to ensure I got my PB.  I decided that, to give my self the best chance of getting my time, I would catch up with the one further forward, overtake her and then just hold on.  I caught her quite easily, and then just kept on going.  I kept thinking 'Oh, this is good, I'm running well, I can't keep it up, but it is fun while it lasts!'   I thanked as many marshals as I could, chatted to a runner in a gorilla suit (I suggested that he could at least have shaved his legs), cheered the Combat Stress team running with a stretcher and thanked everyone who called out my name as I ran past.  It is only good manners after all!  Although one of the other runners did comment that they'd never heard anyone thanking the marshals before - maybe that is something that doesn't normally happen at 'big' races?

Running up the Mall I realised that I had run my fastest 5 miles ever.  Entering Hyde Park, and being hit with the wall of noise I was loving my run.  I hit 10k in my PB time - maybe a smidge faster and in the time it good me to run 10 miles in Paris I ran just over 11 miles today.  At some point I realised that I was definitely going to get a PB and I eased off a little bit.  Then I did a few calculations (not easy - my 12 x table had totally deserted me) and realised there was a chance I could get a time under one hour fifty.  That, I decided, would be amazing.  I was still chatting to people around me, keeping my eyes open for familiar faces - but not seeing any and just enjoying the fantastic weather and fabulous surroundings. 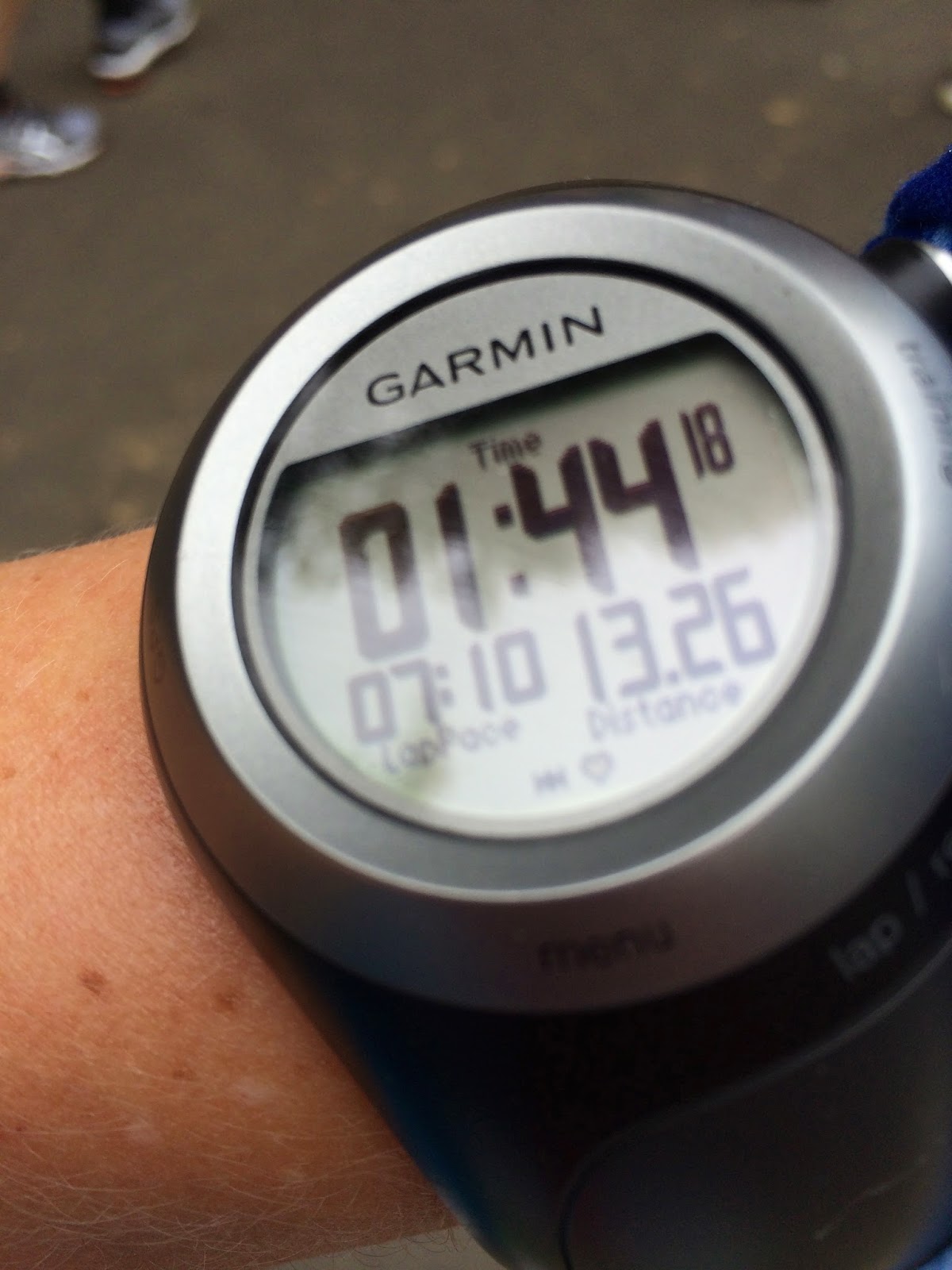 Approaching the finish I, yet again, metaphorically kicked myself for not doing any track running.  I looked at my watch as I got to the '800m to go' sign, saw that it said 1:41 and some change and had no idea if that meant I could finish in 1:45.  I looked at my watch as I got to the '400m to go' sign and couldn't work out how long I'd taken as my brain was just refusing to do any form of simple mathematics (although it was allowing me to nag some poor man who desperately wanted to walk the last 500m!)   There really was nothing for it other than to throw myself towards the finish line as fast as I could.   So that's what I did.  I crossed the line, stopped my Garmin and could barely believe my eyes.  I swore.  I was in shock - one lovely marshal put his arm round me and asked if I was OK, 'I can't run that fast - I don't believe it!'  I replied.  'Oh, but you have done it darlin'!' he replied.
After that it was all medals, bananas, water bottles and goody bags (one of the best goody bags around) as I made my way back to the race village and the UNICEF stand.  A quick massage of my quads was most welcome as were the congratulations of the support team.  I bought myself a celebratory hoodie and was thrilled that I had to put the small back and get an extra small!

Lunch with friends from San Francisco, who we haven't seen for about 8 or 9 years, served to refuel and refresh.  Lovely to catch up with all their news!  All in all a fantastic day.  I still can't believe I have run a half marathon in less than an hour and three quarters.  I may get DOMS of the face from smiling so much!  I'll definitely be back next year - this race is just so pretty and so well organised.  Hopefully I will get lucky in the ballot - if not I'll be after everyone for sponsorship.