Last time I was in Victoria Park it was cold.  I've just looked at the blog post I wrote back then and I am wearing long running tights and a long sleeved top in the photos.  Today may have been overcast at times, but it was certainly vest and shorts weather!  I hadn't realised quite how close Victoria Park is to the Olympic Stadium until today.  I spotted The Orbit as I walked up from the tube station, and the Stadium itself was visible - just - from the start line.

I'd entered this event at the last minute.  I registered online last night.  Run Through organise loads of events around the capital.  I've done two of their events before, Greenwich Park 10k (cute medal with a clock on it) and Battersea Park 10k (cute medal with Battersea Power Station on it) and I had loved the relaxed yet organised feel of the events.  You can choose on the morning whether you want to run 5 or 10k (more of that later) and there is no messing about with goody bags.  A medal, a flapjack, a banana and bottled water are what you get - and let's face it, most races (there are exceptions) fill up the bags with junk that ends up in the bin!

I arrived in plenty of time, warmed up, and was heading back to the start area when I saw a woman in a Kent Road Runner vest at the registration desk collecting her number.  I ran up behind her and smacked her on the bum - it running through my mind only briefly that there could be another person who looked similar with the same top - she screamed with shock, but no one took a blind bit of notice!  She is a regular at these events, so it was a reasonably safe bet that it was her.  I believe she has a season ticket for these events - something I may consider investing in next year. 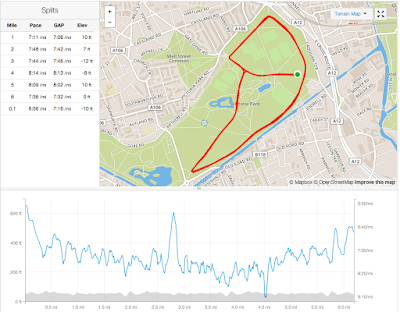 We assembled at the start.  At Battersea the 5k runners had a 10 minute head start, but today we all started together.   This meant that there would be a temptation to jack it in at 5k.  I haven't been running well since April, so I had no expectations today, I thought it would be nice to get a time of around 52 mins.  I just wanted to get past all the slow people at the start.  The park is flat, one slight incline, but not really anything to write home about, and we were running 1.5 laps for a 5k and 3 for a 10k.   I didn't feel as though I was running fast, I felt like there was more in the tank (but I am basically a bit lazy and pushing hard doesn't come naturally), but when I got to 4k I looked at my watch and thought I could be on for a 5k PB.  I picked up the pace (pushing a bit hard for a while), thinking a 5K PB was much more fun than an indifferent 10k time.  I lost my nerve at the point where I would have to commit to the 5k as the finish looked a long way off, bending back around a corner.  I eased off and ran past the 5k marker in a smidge over my PB time - I'd probably have got a PB if I'd gone for it.   I ran the next 2 miles (can't think in kilometres as I am too old) quite slowly.  I knew I had no chance of a PB, so there was no point in killing myself.  But I couldn't help myself from picking up the pace towards the end.  I'd been overtaking, and lapping, people throughout the third lap which is amazingly good for the ego, and as I crossed the line my Garmin said 48:00:95 - that came down to an official chip time of 47:59, 68th overall, 14th lady and for the first time ever the first in my age category!  I am very happy with that - and the medal is lovely too! 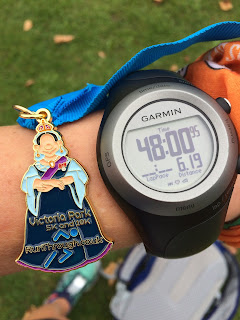