The rain that greeted us we arrived at Fowlmead Country Park was interesting, to sat the least!  I didn't want to get out of the car.  If I hadn't driven for over 2 hours the day before and paid for a hotel I think I would have turned around and gone straight home.  But I had driven a very long way, because I'd booked this race with no real idea where Deal was, and I'd paid for a Premier Inn room, with scenic views over the McDonald's Drive Through, so I reasoned there was nothing for it but to get out there and run.

The Cakeathon challenge is unlike any other race I have entered.  If I enter a marathon then I train for a marathon.  But this was a 6 hour challenge.  Run as many 3 and a bit mile laps as you want within the time limit to qualify for a finishing time, a rather stunning medal and a generous goody bag.  I had not run more than 15 miles since the Giants Head Marathon at the end of June and in no way did I consider myself 'marathon ready.'  And did I mention that the weather was awful?  I put on my Goretex jacket, pinned on my race number and made my way, dodging puddles, to the start.  These are small events, approx. 100 runners, where everyone seems to know lots of other runners and if you don't know anyone at the start you are bound to have made a friend or two by the end! 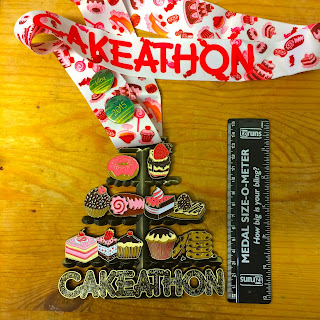 It was a low key start.  The first lap was uneventful, the rain had eased off to a light drizzle and I was baking in my jacket.  At the aid station at the end of the first lap I stowed my jacket in a friend's bag, collected my first wristband (used to count the laps) and set off again.  At this point I was thinking 'I'll go for a half, but if it starts raining again I am quitting.'  Well it did start raining. With the added bonus of thunder and lightening.  I was thoroughly soaked by the time I got back to the aid station and thought 'Oh, what the hell - I can't get any wetter!'  The route was varied enough to keep me interested, 2 short, sharp uphills and fairly good paths underfoot - although they got more and more muddy and the puddles got deeper and deeper as the morning wore on.  There was one long, flat stretch which should have been wonderful with great views, but I found it very tedious.  Lots of puddles, views obscured by clouds and no shelter from the wind.

I completed the first four laps (half marathon) in about 2 hours.  Not fast by many people's standards, but it would have been faster if I hadn't stopped for a chat every time I got to the aid station.  And now I had a decision to make.  I had 4 hours of the challenge left, at that point the rain had eased off a little, so carried on.  I almost immediately regretted my choice.  I ran most of that lap on my own.  I'd seen the route four times already, it was raining hard again, I could have stopped and got a medal and been on my way home by now.  Why on Earth had I paid good money for this mental and physical torture?  My mood was improved slightly by a bit of banter on the half mile 'out and back' section to the aid station and I decided to carry on.  One reason I hadn't stopped was because if you want to stop and have your time written down you have to ring a bell.  This reminded me of the bell US Marines have to ring if they want to quit training - and that felt a lot like failure!  This lap was where my whole attitude to the challenge changed.  I caught up with Greg and Phillip, I knew Greg a little from a previous race.  They were taking a walk break, so I walked with them.  I said I was considering walking the rest of the race - but that walking would be boring (by which I obviously meant walking by myself would be boring).  Greg said he had run the first half (in a similar time to me) and the rest of the challenge was an endurance training session.  A bit of running, a bit of walking and a lot of chat!  That seemed like a good idea and we ran, walked and gossiped our way through the next lap and a half before going our separate ways.

I carried on this strategy and suddenly I was on my 8th lap.  8 laps was marathon distance and I had plenty of time left.  I pondered an extra lap to make it an ultra, but decided that I couldn't face the long boring stretch again.  Somehow when I got to the aid station and everyone was telling me that I still looked really strong I forgot about that and set out again.  Madness!  I was so pleased to complete the 9th lap that I briefly considered lap 10 before coming to my senses and ringing the finishing bell.  I am stunned that I could cover nearly 30 miles on so little training.  It was lovely to spend a day with so many friends all doing something we love.  The weather could have been better - but if it had been I don't think it would stick in my mind as such an achievement!

Huge thanks to Traviss & Rachel, aka Saxons, Normans & Vikings.  This was the first of their events I have run, but I am sure that it won't be the last.  I won't be at Cakeathon next year though, as it opened for entries last night and has sold out already!