A tale of sacrificial buffs and over reliance on technology. 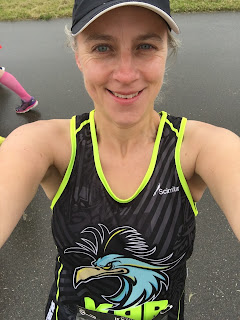 I had a score to settle with this race.  Last year I had an awful time and had sworn that I would never enter it again.  That resolve lasted all of about 5 minutes as a friend threatened to snag my number if I didn't do it!  I wanted to run this year's event for fun.  At Paris in April  I had put myself under enormous pressure to run a sub 4 marathon, which for various reasons did not happen.  I was despondent and very self critical for a while.  Yesterday I decided that I was just going to go out and run - I gave myself permission to walk from the cones on 'Tourette's Hill' to the fence at the top if I wanted to.  I did not print a pace band as I did not want to feel I had a target to meet.

It was cold and raining when we arrived at the Cyclopark.  When I'd packed my bag I had relied on the BBC Weather forecast so had no rain jacket, thankfully I'd thrown a cap in at the very last minute, so it was sunglasses off and cap on.  I set off with the friend I ran with last year.  We chatted and ran, ran and chatted and, for me, the time was passing very pleasantly.  Not so for her unfortunately.  It turned out to be a reversal of last year - we parted company at about 11 miles again, having averaged around 8.50 min/miles, I left my friend by the personal drink station table we had set up and ran on alone.  It had stopped raining just before the start of the race and had become warm and humid but still overcast.  On one of the slight inclines of the lapped course there was a slight breeze which was lovely, after that it was a downhill towards two of the most amazing marshals ever - Neil and Les - I asked them to keep a look out for my friend and next time round was reassured that she was doing OK.  After this, on 20 consecutive laps, came Tourette's Hill.  Let me assure you, it is wisely named!  The stretch up to the finish area is slightly uphill - but enlivened by two aid stations, loads of supporters, including the most energetic, loud, curly haired girl on the bridge who was cheering and shouting out names as we passed below.

I was feeling good, I'd settled into a steady 9min/mile pace (according to my watch) that I was more than happy with and just settled down to keep on until the end.  In my mind I knew that 9 min/mile pace would give me just sub 4hrs, just enough sub 4hrs to allow, I hoped, for Garmin's notorious inaccuracy on lapped courses.  I slowed down a few times to check that other runners were OK - a friend from Basingstoke parkrun had lapped me a couple of times, so I was shocked when I lapped him.  We had a brief chat then, and I seem to recall that, later on, I walked backwards up a hill while asking him if he was ok!  I slowed again to help a lady who felt sick.  I say 'help,' what I actually did was stop, ask if she was OK, ask if she would like some water, gave her my water bottle and then ran on.  Half a lap later I remembered that it was my favourite water bottle and I had no idea who she was!

At some point the heaven't opened and we got a proper drenching!  I felt sorry for the supporters then as standing around in the rain is far more miserable than running in it.  I don't think it lasted longand after the rain we had bright, hot sunshine and a lot less humidity!  This is where having a personal drinks station was great - it meant I could change from cap to sunnies and back again without deviating from the route.  I was running and chatting and smiling and running - having a great time.  My right quad, which had been tight all week, was still tight, but that was more than countered by the pain in my left foot from the Morton's neuroma, so at least I was fairly balanced!   The new course, shorter laps but more of them, was great, the laps seemed to tick by very quickly. 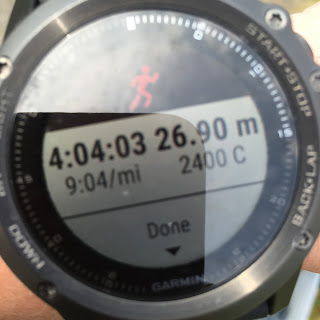 There's a saying amongst long distance runners, 'Never trust a fart after 20 miles.'  With this in mind I took advantage of the conveniently located, track side, portaloos.   Too late I realised that there was no loo roll!  This was a bit of a catastrophe. I had a £10 note in my pocket (although I'd forgotten about that at the time) but there wasn't a scrap of anything remotely loo roll like anywhere to hand.  I considered sacrificing a sock - but with about 6 miles to go that seemed like the way to ensure blisters.  Then I saw my lovely, lovely White Star Running buff around my wrist.  Needs must etc.  I can buy a new one.  I have long thought that some one should make a buff which has a perforated strip along one end for just this sort of situation.

Back out on the road again, I found my legs had started to stiffen up a little during my comfort break.  I looked at my watch and figured I should be able to get sub 4 if I could just maintain my pace.  I realised too late (i.e. the end of my penultimate lap) that my Garmin was way off the mark and that I wouldn't be able to get back enough time in one lap!  According to Garmin, I passed the 26.2 mark in 3hrs 57min - but I still had a way to go.  I eventually got to the finish line in 4hrs 4mins and some seconds with my lying Garmin reading 26.9 miles. 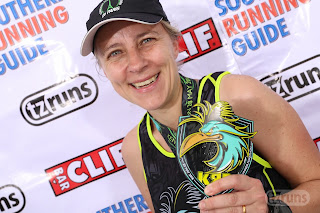 Oddly, given how upset I was after Paris, I was not at all disappointed.  I'd set out to have a good time, not to run a good time.  I'd had a great time running with amazing people, supported by yet more amazing people and my time wasn't too shabby either!  It had been my most evenly paced marathon to date too, not perfect by any means - but there is no 18 mile dip in pace (this is normally where I get bored with the idea of running and my pace plummets).  So all in all a good day at the office.  I was given my humungous medal, my quirky goody bag, brand new and gorgeous buff (that will never be sacrificed!) bottle of beer and went to have my photo taken by the amazing Stuart, who can make a silk purse out of a sow's ear and me look halfway decent after a 26.2 miles.  Then it was time for a quick, painful, sports massage with a lovely student from the University of Kent before going back outside to chat and cheer and support other runners.

This is such a lovely race for chatting with and getting to know other people.  You see the supporters every time you go around the track, they feel like members of your family by the end.  If you are suffering they will give you a hug and a few words of encouragement to spur you on your way.  I remember thinking that the runners were all really considerate and polite.  There was lots of lapping going on, but there runners seemed to pass each other without any of the agro you sometimes see in big city races and, dare I say it, parkrun.

So, a HUGE thank you to all at tzruns, and to all the marshals and supporters, especially the girl with curly hair on the bridge.  You are all amazing and I had a great time.  Same again next year?   I can't wait that long, so will be back in Kent for the first Kent Coyote marathon in September. 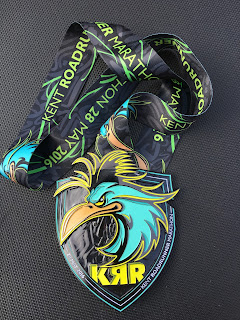