The one where I started too fast and just kept going. 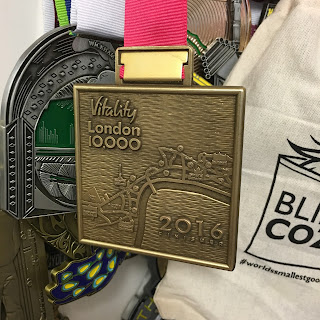 So, what does one do after running a marathon?  Rest, get a massage, eat all the food in the county?  I did the second and third, in fact I am continuing to do the third item on that list as I type, but I was also signed up for a race today.  I've done the Bupa 10,000m every year for the last six so I wasn't going to let a little thing like change of sponsors stop me running it again.  Despite the fact that it is now the Vitality 10,000m most people (me included) still seem to be calling it by its old name!

After a beautifully warm day yesterday, with no running (don't Sunday's seem very long with no running and no prep work for school the next day?) this morning was cold and grey.  I hastily shoved a pair of long tights into my race bag and headed off to London town.  Every station saw more lycra clad bodies embark.  I snoozed and faffed around on my phone, I groaned as I stepped down from the train as my quads screamed at me, groaned some more (ok, lots more) as I struggled down the steps to the ladies' loos and was instantly cheered when I saw that the barrier had been propped open so that I could just walk in rather than paying 30p to spend a penny!  And there was loo roll!  The day was looking up!

Thence, on the underground, to Green Park.  To say it was congested would be an understatement.  I suspect that the situation wasn't helped by the inability of the vast majority of the runners to walk up the escalator!  The Jubilee Line isn't a deep station.  Arriving in Green Park the feeling of congestion continued - it was very busy.  By chance I bumped into some friends and saw some sights that can't be unseen!  Still - we had a giggle, proving that we are totally mature and respectable.   It was jolly chilly as we hung around, so pretty quickly we decided to stow our bags and think about warming up.  We got separated on the way to the bag drop - as I spotted another friend and went over to say hello, so I dropped my bag and joined the loo queue.  It was a HUGE queue and there were only 25 minutes until the start of the race.  I wasn't convinced I would make it to the front of the queue before I needed to start running - so when I saw yet another friend I left the queue and went with them to the start, convincing myself I really didn't need that last nervous wee!

In previous years each starting pen has been separated into three zones: A, B and C.  That was not the case this year so each pen contained runners with vastly different anticipated finish times.  I was in the front starting pen - a first for me - and feeling far from confident.  I was pointed in the direction of 'my friend' and looked over to see another brave soul/total idiot in a Kent Roadrunner vest.  I must have seen him several times on Saturday - but we hadn't actually met before.  We chatted, had a photo taken, agreed that we were both as mad as a box of frogs.  I explained that I was going to try to maintain my marathon pace (about 9min/mile) and see if I could survive.

And then we were off.  After about 400m I looked at my watch and though 'Woah lady!  Ease off!' so I did, only managing to slow down to 7.57 for the first mile.  It hurt, it hurt a lot, but I was able to move.  I clicked through the miles (I don't do kilometres!) and they were all under 8min/mile.  I was astounded.  I kept waiting for the wheels to come off, but they didn't.  I passed a runner with a shirt that said 'Race official - do not pass' on the back.  I got to the 5km mark in about 24.50 and though - I can do 10 minute miles now and still be under an hour! But I just carried on running.  Back along the Strand, down past the Houses of Parliament and then round to Birdcage Walk and the '800m to go' sign.  That was when the wheels really started to wobble.   I was not going to slow down now, but I really struggled to keep going.  I swear that the gap between the 800m and the 400m signs was well over 700m.  At the 400m sign I could see the 200m sign, and by the time I got to the 100m sign I could see the wonderful, beautiful finish.  I didn't care about the scenic backdrop of Buckingham Palace - all I had eyes for was that finish mat!  I was done.  And in under 50 minutes.  Far better than I'd anticipated!

The medal is quite nice - double sided, and the goody bag wasn't too shabby.  I still think the old route, through Leadenhall Market and along the Embankment, was better, but to be honest I was too busy concentrating on running to take in the sights!  Next year is the 10th running of this race - so no doubt I'll be back again. 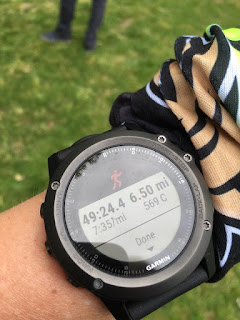