Sydling Hill Race aka Not the Giants Head Marathon. 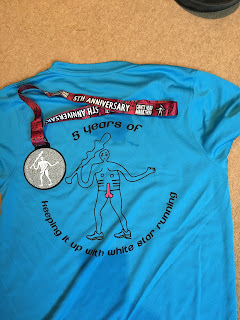 The Giants Head Marathon is, without doubt, my favourite marathon.  I booked my spot in this year's race as soon as White Star Running announced the date, having already booked a room at The Greyhound Inn.  To say that I was looking forward to it would be something of an understatement.  At around 28 miles long with 3000ft of elevation gain it is not exactly a walk in the park, but it is so much fun!  Aid stations every 3 miles, with some of the best volunteers and a fabulous selection go cakes and of course the famous 'Lovestation' make White Star races very special, as do the wonderful people who take part.  You are never alone for long during a race and conversations are interesting and varied.

On Friday evening Husbando and I travelled down to Sydling St Nicholas, a village in Dorset with no mobile reception at all, having both switched from the marathon to the shorter, 10k-ish (actually 11k) Sydling Hill Run.  We had also cancelled our second night at the Greyhound.  This made us both a bit sad.  Husbando had switched due to the injury from the Casterbridge Half and I was, for the first time in my life, being sensible.  On Sunday I am flying to Tanzania for a month, to trek with boys from school and climb Kilimanjaro.  To run a marathon the day before a long haul flight might be just about manageable, but the risks involved in running so far off road before a long flight and a month of trekking were just a little too high for me to contemplate. 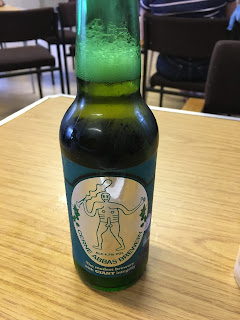 We met up with friends when we arrived at the village hall.  Once again the Women's Institute had put on a fantastic meal for us, and there was a bar!  After a couple of willy themed lagers we retired to the Greyhound for race prep gins and tonic!  Our friends were running the marathon and I was already beginning to regret being so sensible!

After a sleepless night (too hot and humid) we woke up fairly early and all had breakfast together before Husbando and I cheered C & M off as they started the marathon.  I saw lots of my running friends at the start and my regrets grew.  We went back to our room and occupied ourselves until it was time for us to head to the start.

The Sydling Hill race has fewer runners than the marathon, and starts out along the same route as the big race, with the same, killer, concrete hill within the first mile.  Husbando and I started out together, but about halfway up that hill, when he had pulled a little way ahead, I decided to part company with my breakfast.  That slowed me down a bit!  This was never going to be a PB race, but I was hoping not to disgrace myself too badly, so this wasn't the start I was looking for.

I ploughed on...up hills, down hills, across fields with much longer grass than I remember (long grass that came in useful when I tried to turn my stomach inside out - my body seemed to think I still had breakfast to throw up!) and chalk paths that were going out of their way to try to twist ankles.   I wasn't going to let that happen!  Pretty soon we got to the final aid station - which is also the final aid station in the marathon.  I knew that the rest of the way was predominantly down hill - just one small hill to negotiate!  It was refreshing to run down the hills on legs that weren't screaming at me and before long I was running across the village green to the finish.  1 hour 13 minutes is not fast for an 11k run, but I was the 18th woman to finish, 2nd in my age category and 40th overall.  Husbando had finished 6 minutes and 20 places ahead of me.

After a quick shower and change of clothes we came back to the green, armed with cakes, tea and coffee and camping chairs to sit and cheer the other runners in!  It was great to see friends finish their marathons and there were some fast times recorded on such a tricky course.  As always the organisation was superb, the atmosphere warm and welcoming, the bling is awesome (who doesn't love a spinning willy?) and the t-shirt is pure genius - even if I can't wear it to school!

We are back home now, and I have a humungous ruck sack packed and am quite excited and nervous about my trip.  I am also just a wee bit jealous of everyone still in Sydling St Nicholas, no doubt drinking and dancing the night away and looking forward to the madness that is the Sydling Bell Race tomorrow morning!  Have fun, run well and I hope that the bells don't irritate hungover heads too much!
Posted by MrsBridgewater at 00:21